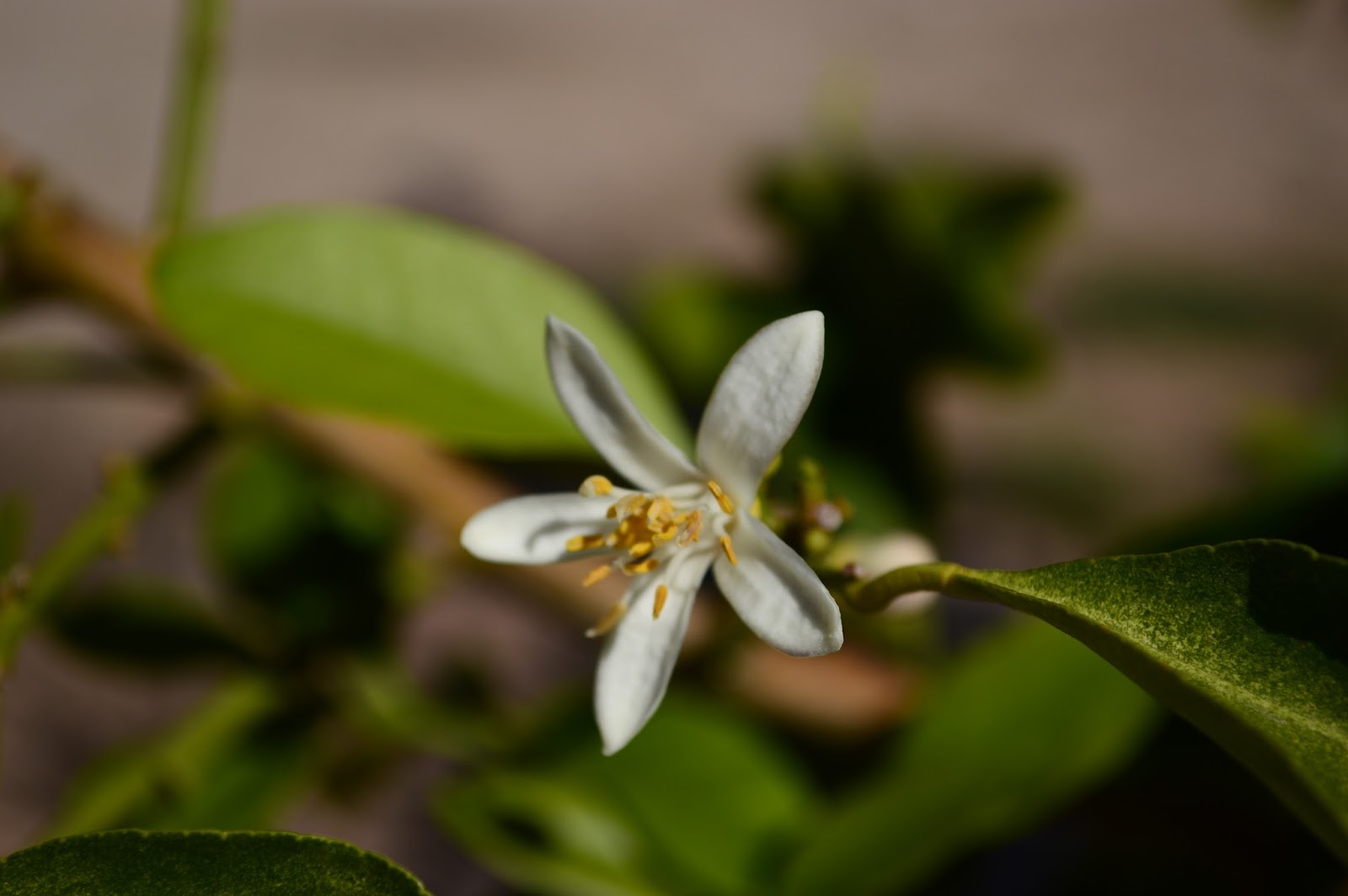 Yes, really!  A few lemon blossoms are scattered here and there through our two lemon trees.  Complete with fragrance.

I have no idea whether any fruit will set, but it is quite pleasant to have this little flush of bloom at the end of August.  Daytime temperatures continue in the triple digits - though today's temperature of 104 F (40 C) begins to feel almost mild, especially now that the humidity is over.  The weather has been insane here in any case, with unusually heavy rains through much of July and August.  Perhaps they account for the happiness of the lemon trees! 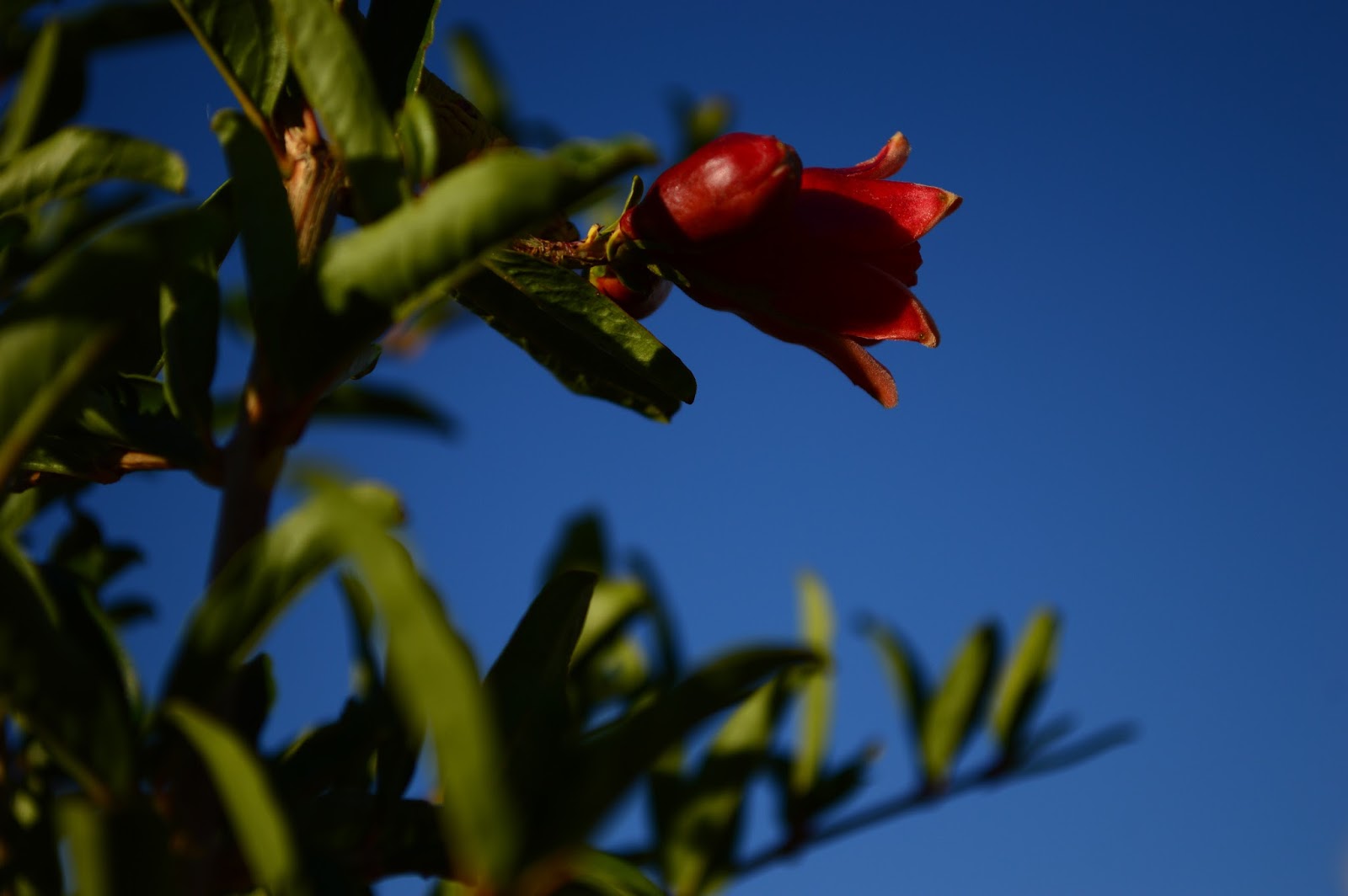 The pomegranate is throwing out a few blooms as well. 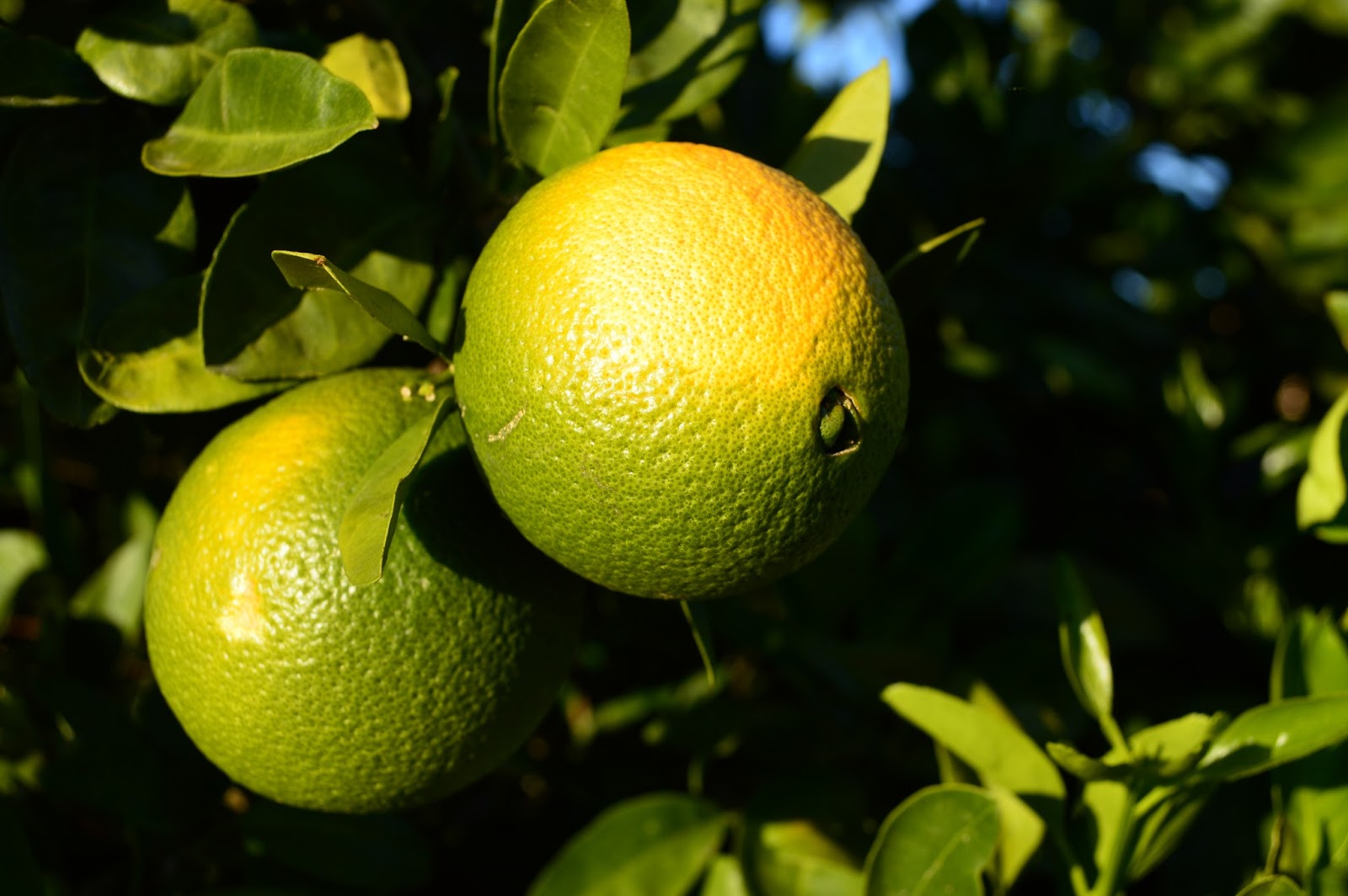 ...while the orange tree is simply going about its business of ripening the year's crop of oranges.  It does have some handsome new growth, but I haven't seen any flowers.  It has a full load of fruit, however, which is beginning to color up.


Ever so slowly, summer is drawing toward its close... 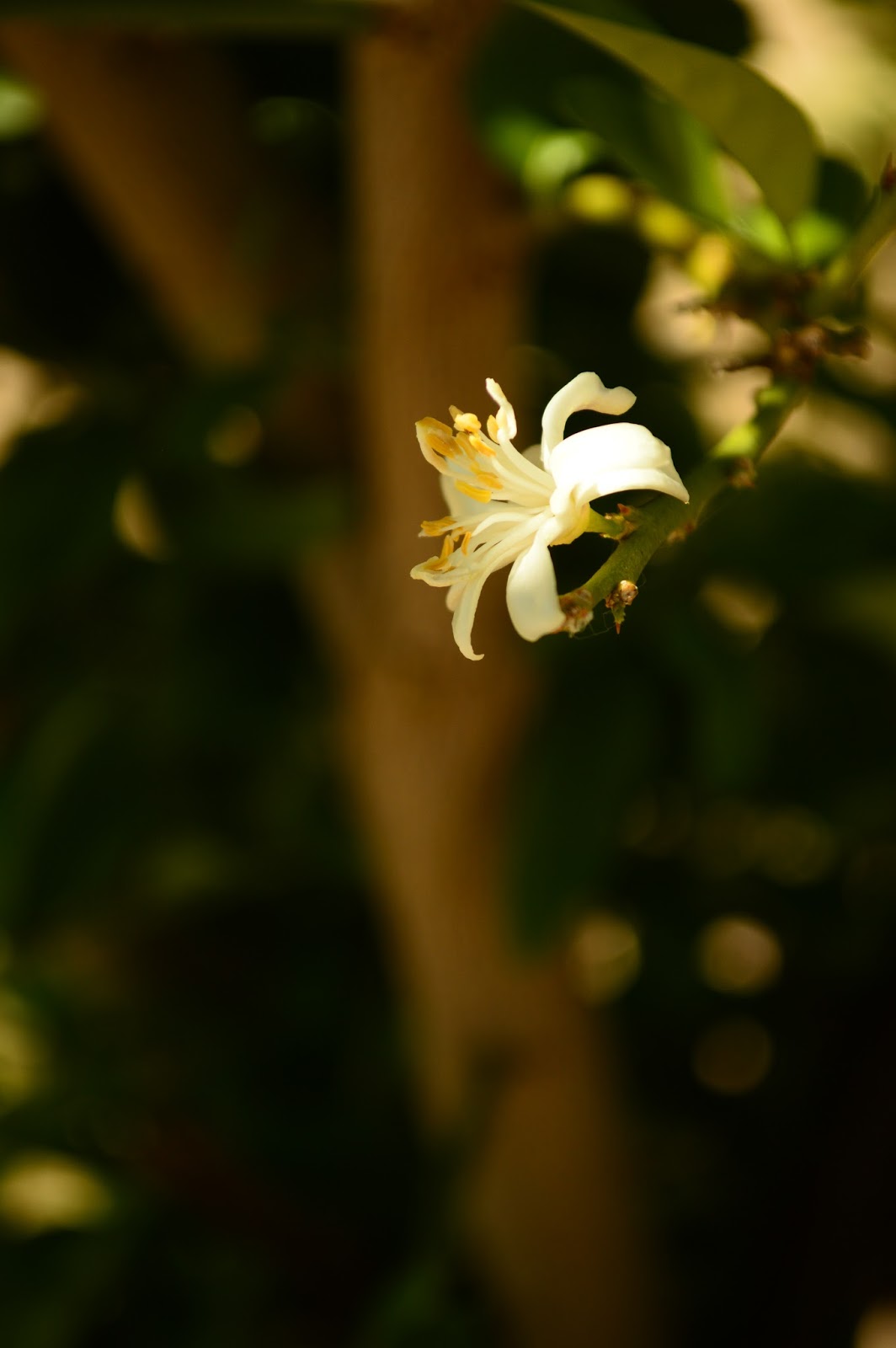 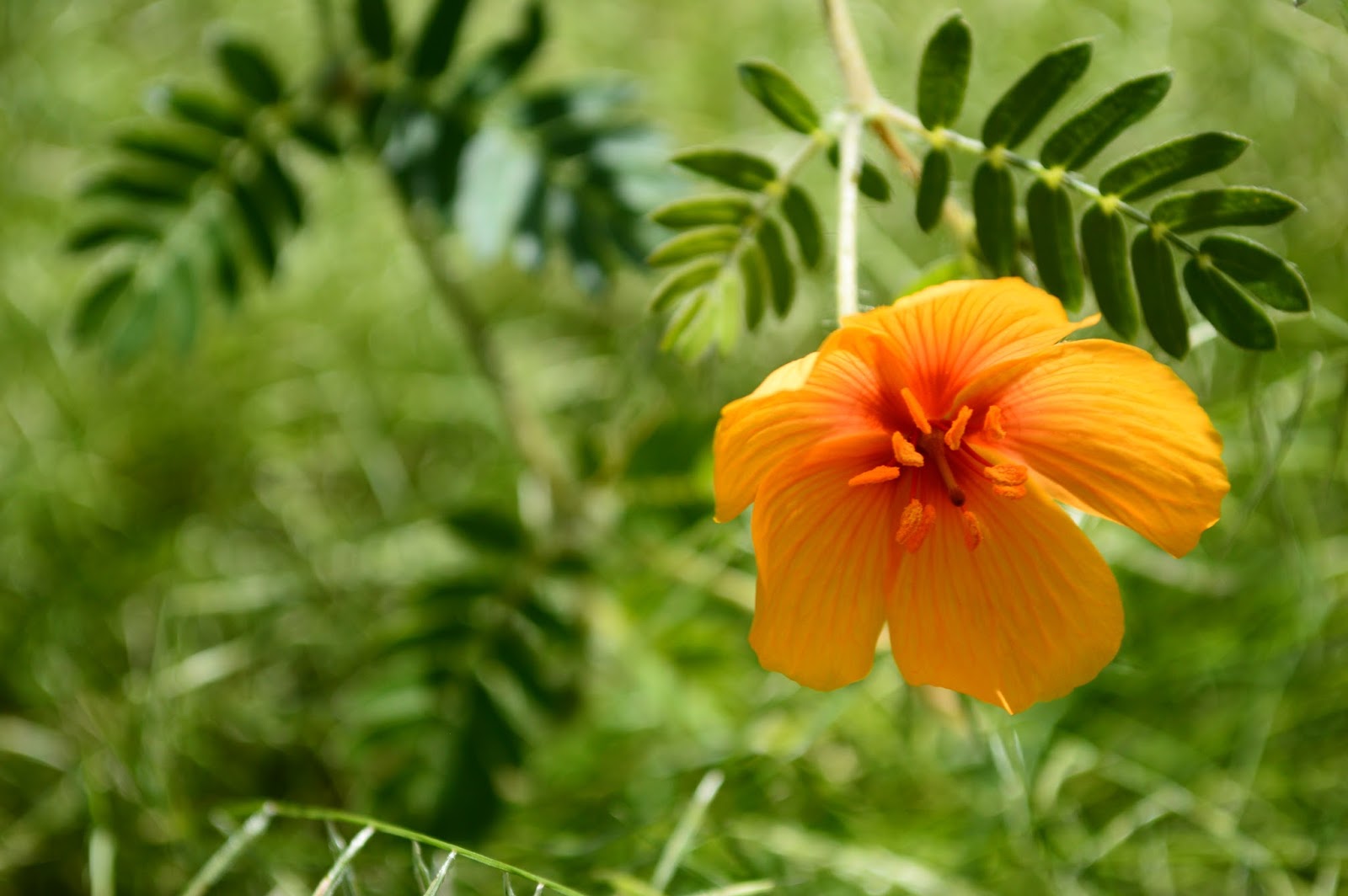 Back in July they began blooming, brightening the roadside with brilliant golden-yellow.  Oddly enough, I could not locate these spectacular wildflowers in any of my books; but a very brief search across Google Images allowed easy identification as Kallstroemia grandiflora, the Desert Poppy.  Not a true poppy, nor even a member of the Papaveraceae, it nevertheless gives a bright golden-poppy effect, which has resulted in such common names as Desert Poppy and Arizona Poppy.  (The latter is too limiting as it grows also in the Mexican Sonora and across into California.)

Locally it grows to about 18 in (46 cm) high.  It is a very open, airy plant, often with two main blooming stems, giving a spread of about 3 ft (90 cm) - sometimes in one direction only!  The picture below is of a single plant. 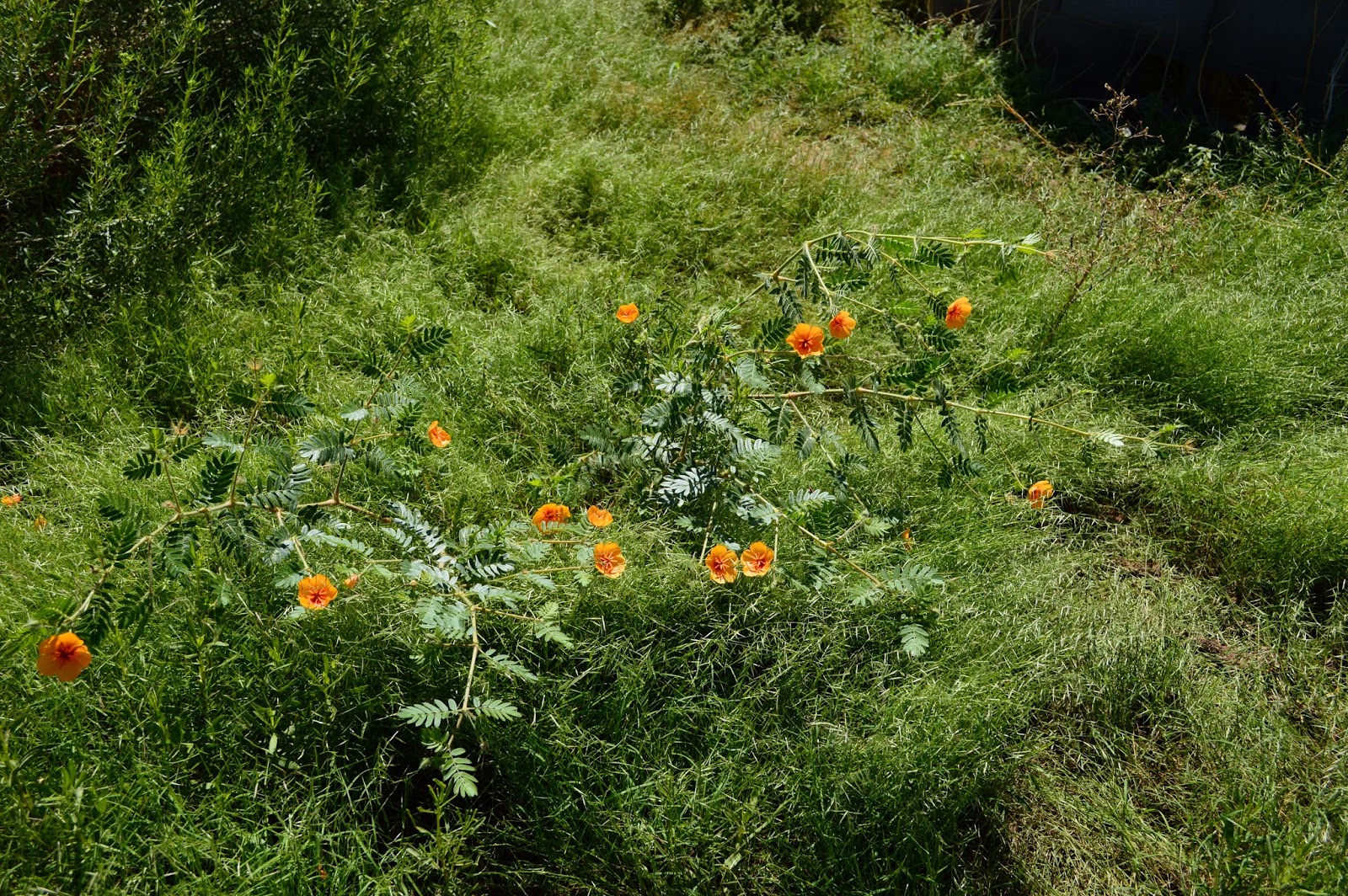 However, in a little meadow down the road, it is growing more lushly, with plants spreading all directions and some clambering happily to about 4 ft (122 cm) over dead branches.  Foliage is medium green, sparse (as with many desert plants), and rather fernlike. 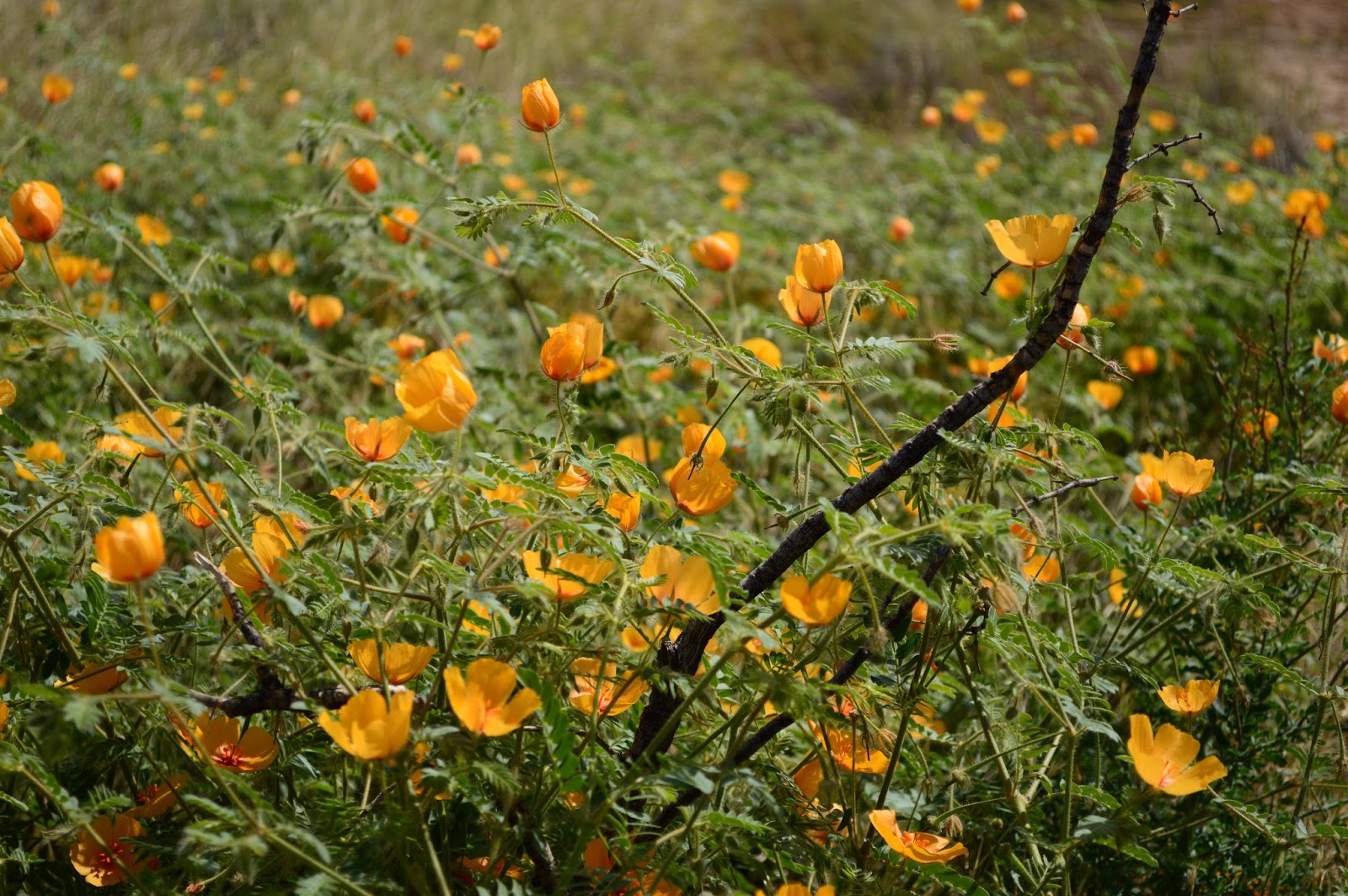 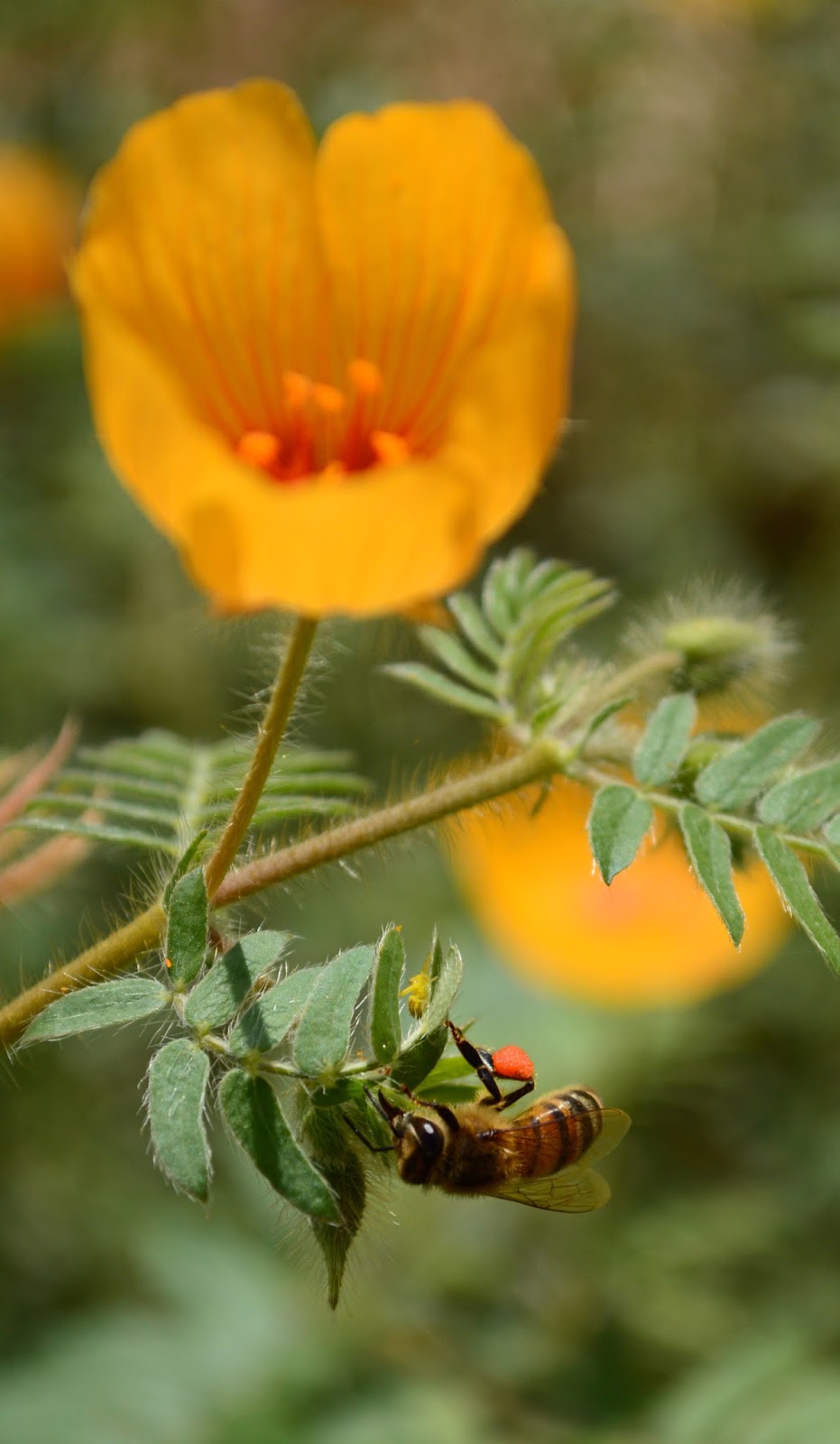 The bees adore it and come away with bright orange bags of pollen. 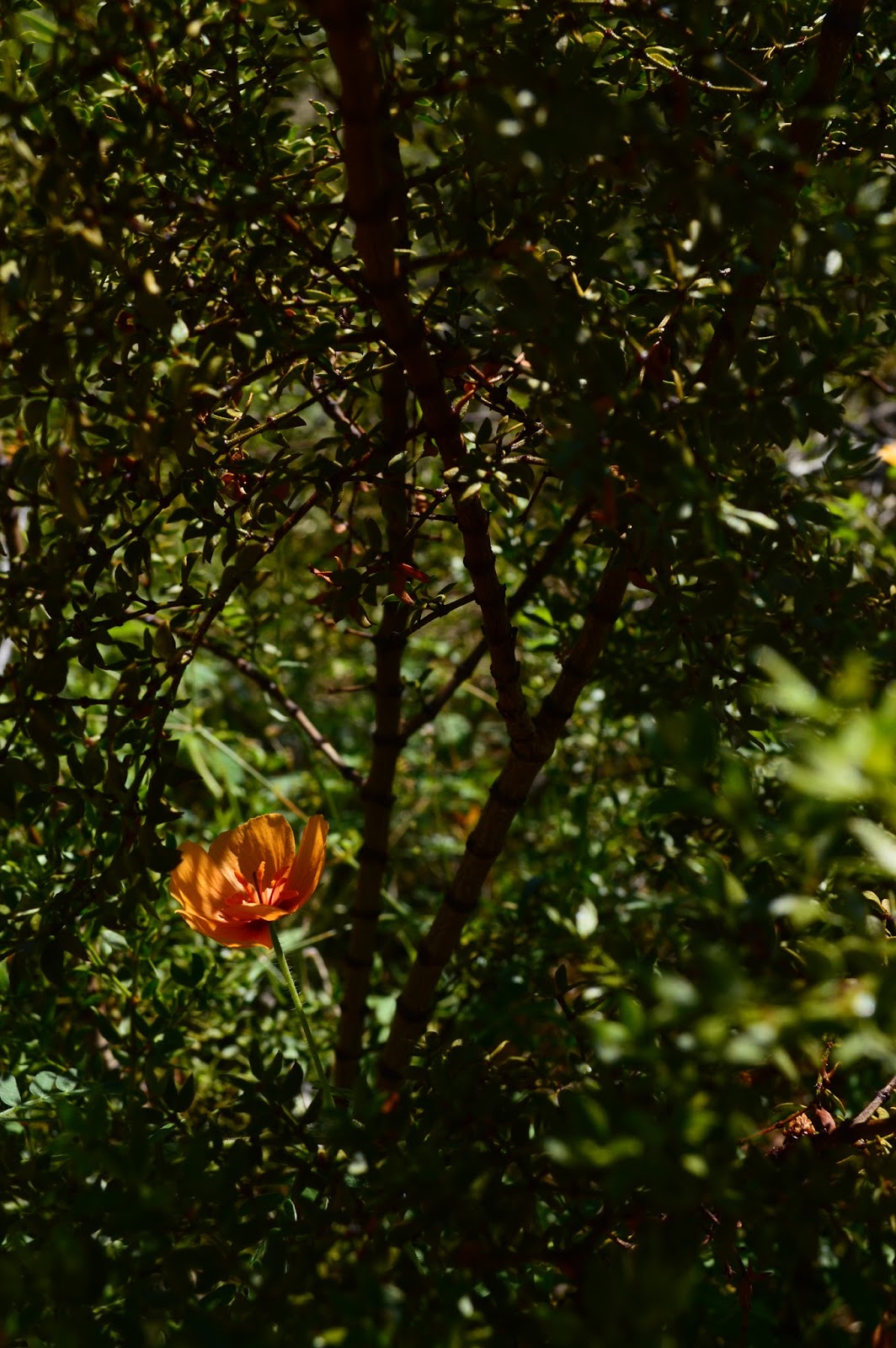 I even found one plant trying to support itself against the stems of a creosote bush (Larrea tridentata), though it was unable to bloom as freely in all that shade.

The blooms themselves are a delight.  They glow in the intense desert sun as if they were veritably made of the light themselves.  Golden-yellow petals deepen to scarlet at the flower center.  Stamens are yellow.  They close in the afternoon or on cloudy days. 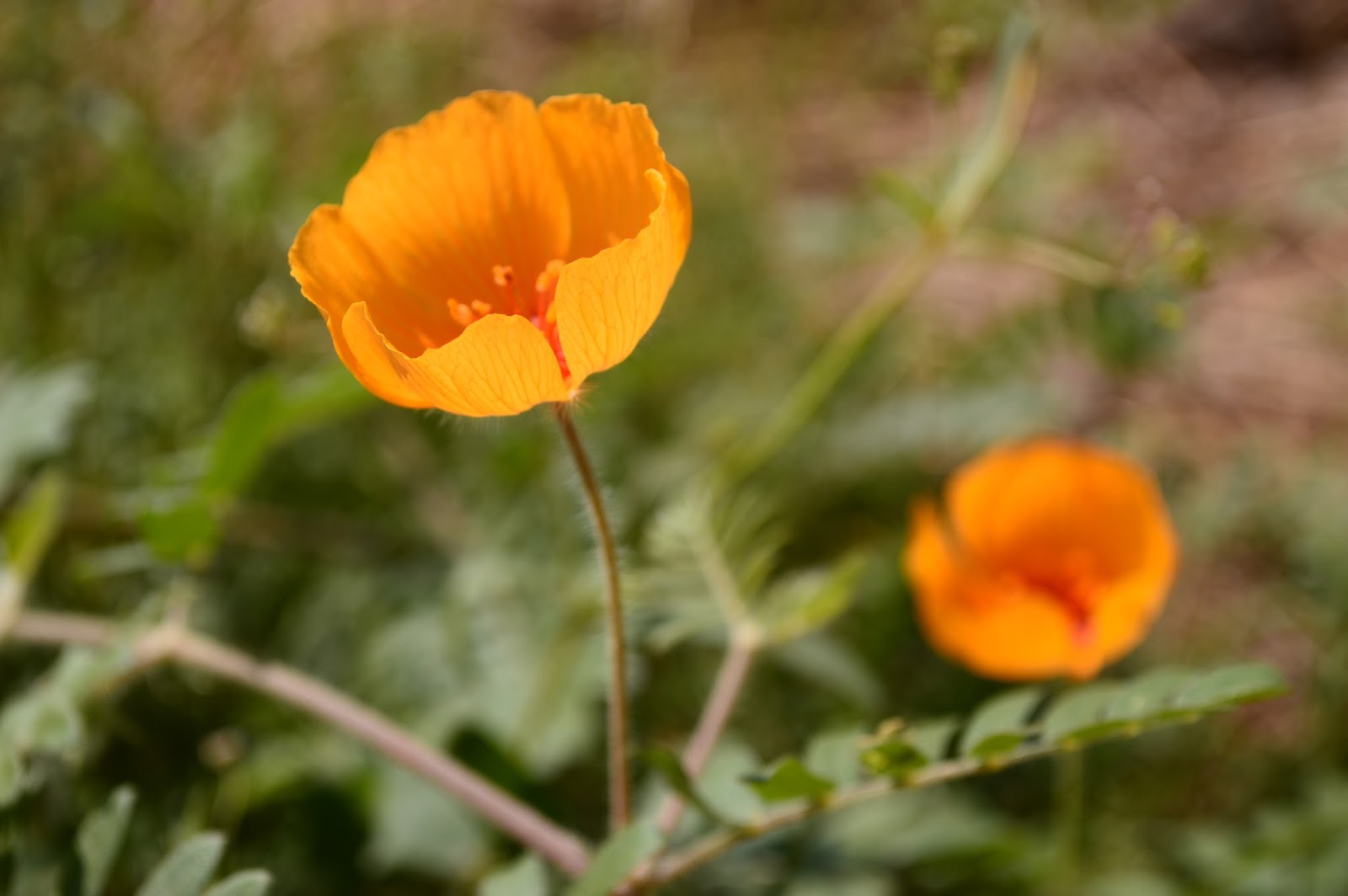 However, they seem to be thoroughly enjoying the unusually heavy rain that has been falling.  As they grow in low, wet spots, they must be able to tolerate a range of moisture levels.  And when the sun shines again, they open out as bright as ever. 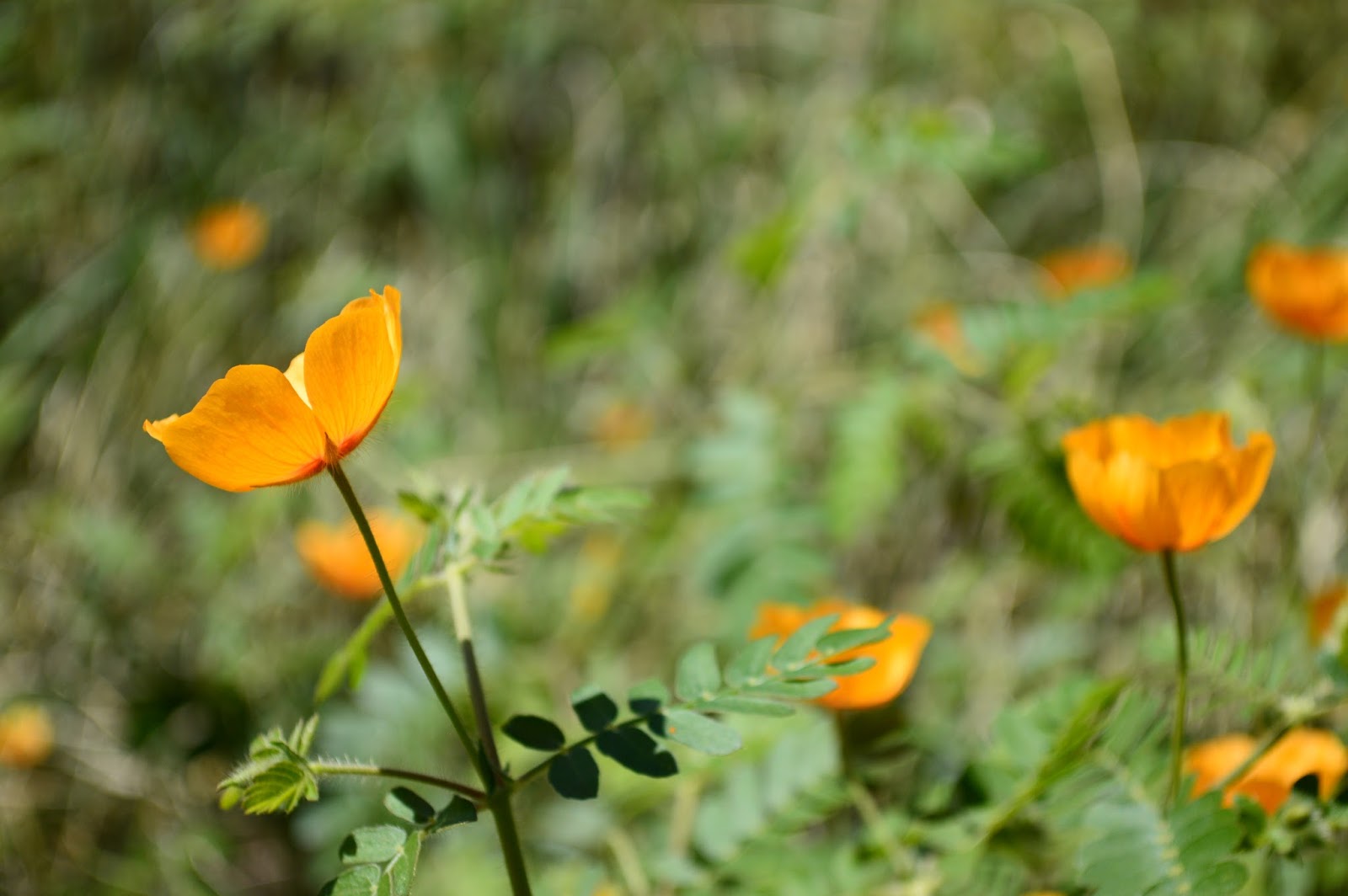 Starting with the Soil 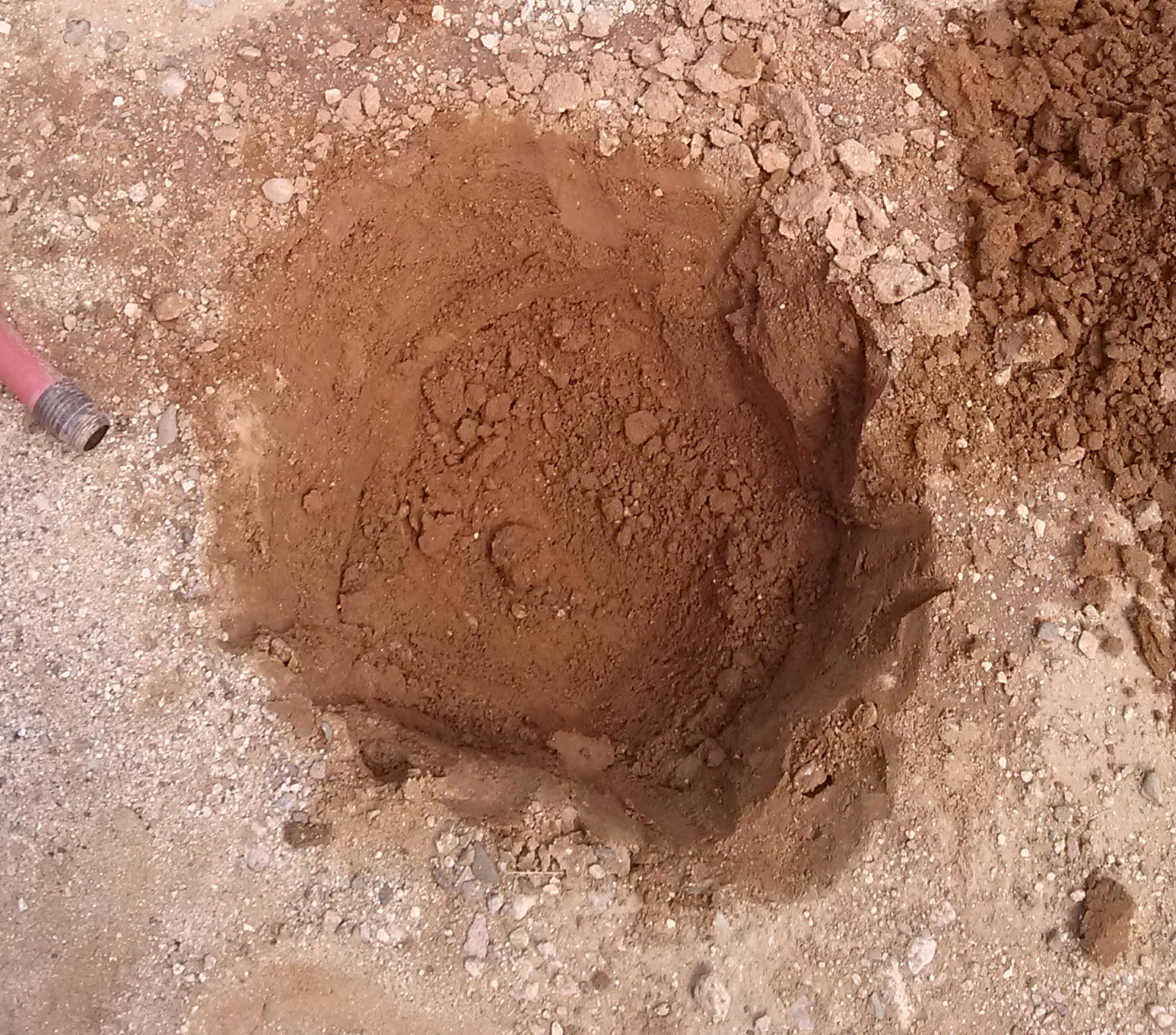 This is the first post about creating the actual garden.  I hope that readers from long-gardened areas will be able to tolerate my very haphazard approach.  This site is more or less virgin desert.  It has on it the detritus of construction, ranging from nails to broken lightbulbs, as well as plenty of leftovers from a more primitive time, e.g. cartridges and broken beer bottles!  But to the best of my knowledge, no one has attempted a garden here yet.

And after all, one must begin with the soil. An attempt to dig a hole several weeks ago was very discouraging.  The ground was tough and dry.  As I am my own gardener, I was concerned about the amount of labor involved in digging an entire garden - no matter how small - out of desert hardpan.

But a few days ago, I finally set to work with a more intelligent approach.  I snaked a hose up beside the house and, turning it as low as possible, soaked a small area thoroughly.  Then I began digging.  And I am happy to say that the soil came up easily - nice, coarse, crumbly, brown, gritty stuff.

Of course, I do not want it to revert to its former tough, impermeable condition as soon as it dries out.  This soil definitely needs improvement in order to grow a garden.  Happily, some material is to hand.  I took fresh manure from the horse pen and mixed it with the backfill as I refilled the hole.  I have no plants to put in yet because it is still high summer here, so I intend to work the soil around gradually.  I trust that the manure can age in the ground while at the same time conditioning the soil it is in.

All was well, therefore, till today.  Today I decided to try digging on the east side of the garden area.  This is the side furthest from the house and closest to the horses.  I did not run the hose because we had a strong downpour last night - a good deal more water than I would apply from the hose!  I simply began digging.  Very difficult.  Not impenetrable, but difficult.  Perhaps six inches in, I filled the hole with water and let it drain.  Then I started digging again.  Better, but not as good as up by the house.

I began to wonder if I was dealing with topsoil by the house versus the regular stuff of the desert down on the east side.  That would not be good because there would be more of the latter than the former in my chosen area.  At the same time, it seemed equally likely that I was only having trouble because of compacting from the heavy machinery used to build the horse pens last winter.

I dug my hole.  It actually grew easier as I dug lower.  One count for the heavy machinery theory.  When I was finished digging, mixing in the manure, and backfilling, I went up to a point where the machinery had not trespassed.  It was just far enough from the house that it seemed fair to guess that I wouldn't strike added topsoil either.

Here I began just a little test hole, once again with no additional water.  And the soil came out easily.  So it looks like I am only going to be fighting compaction in the area adjacent to the horse pens.  That was encouraging!

So I am working on the soil a little bit each day, trying to get it loosened and add a little nutrition for the plants.  Perhaps they do things differently in the older parts of Phoenix, but it does seem that I am rather on my own here.  I cannot find that bulk soil amendments, such as peat or topsoil, are commonly sold in this area.  Maybe I am looking at the wrong sorts of suppliers.  At any rate, a reasonable amount of manure and some good digging ought to provide a starting point for my plants.  I'll be relying mainly on fairly sturdy, drought-tolerant types in any case.

But I have to be able to dig holes to plant them in! 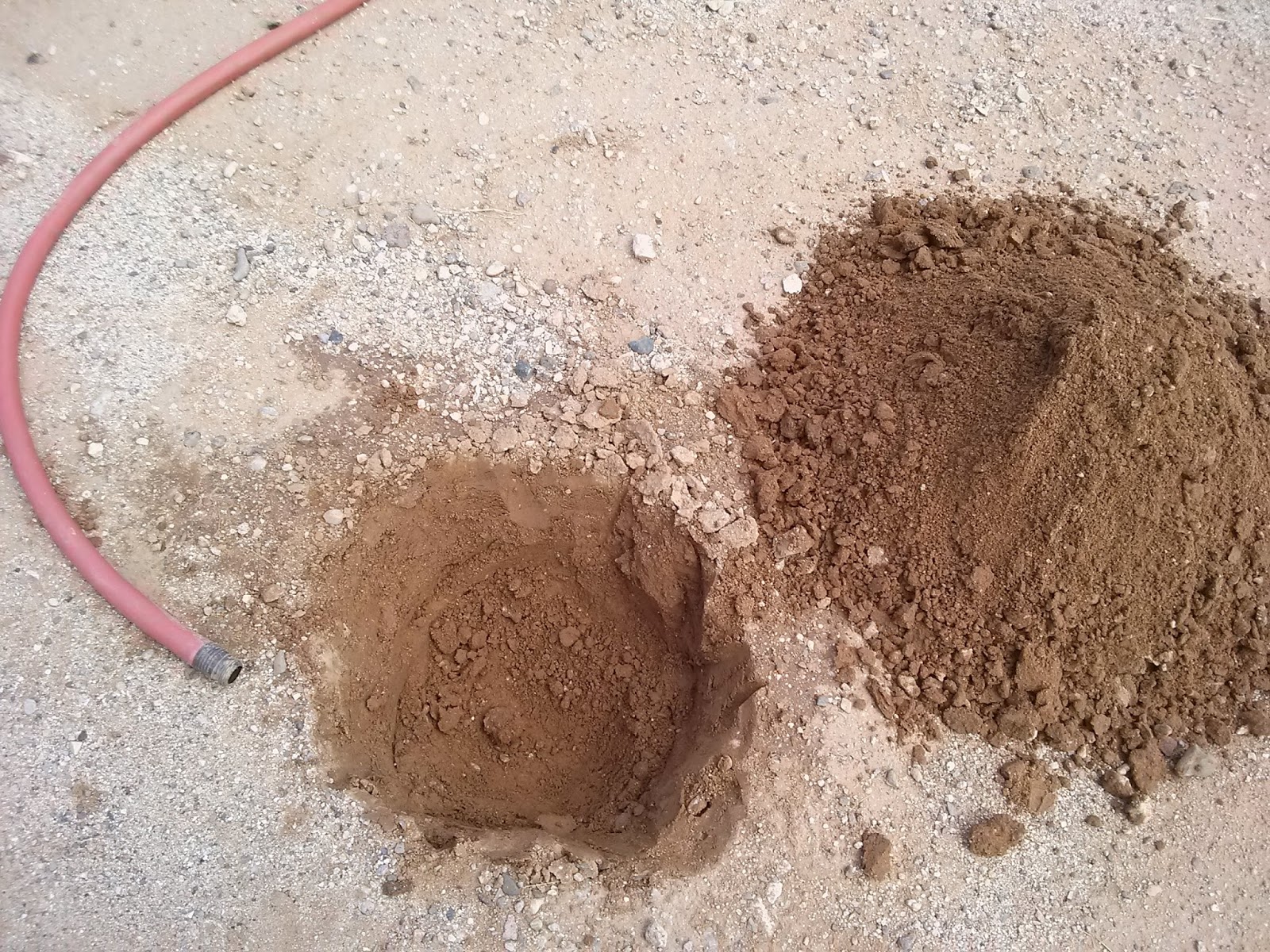 Here are some photos from today's digging - not very interesting to look at, but there are a few things to point out.  First, how quickly the soil dries.  The light-colored surface soil is shown less than twelve hours after a thunderstorm so heavy as to produce flash flooding.  Second, the soil is actually of a somewhat loose consistency when damp.  It is not a pure clay soil, nor is it sand.  So I have hopes that it will serve as a good garden component if properly handled.  The one thing that cannot be seen is the alkalinity.  I have not tested pH, but I have no doubts that, like any desert soil, the salt content is high.  This is another reason why supplemental material will be vital for healthy plants.

Below is the backfilled hole and adjacent soil partially smoothed.  Again, the difference between damp and dry soil is quite visible. 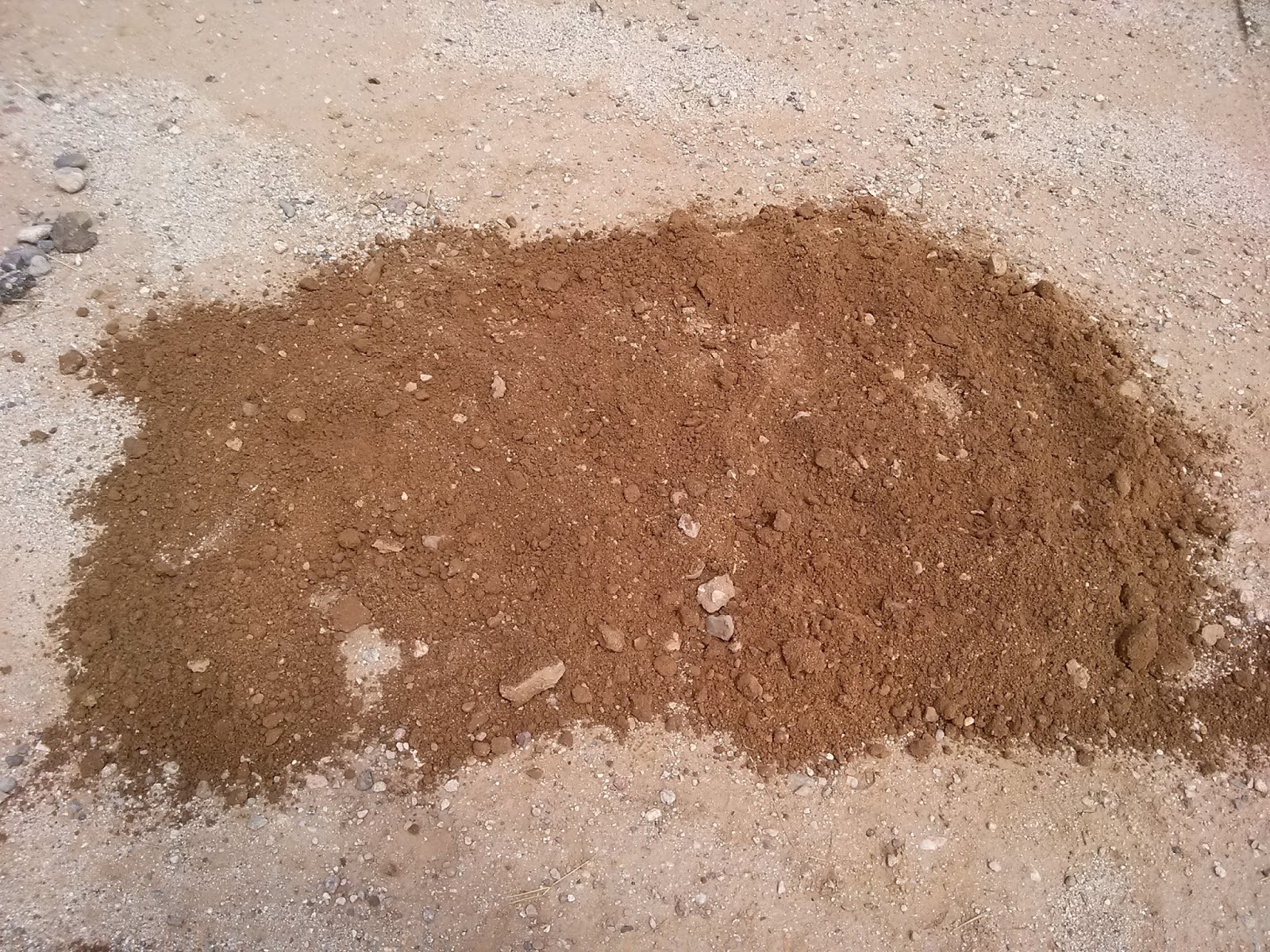 Posted by Amy@SmallSunnyGarden at 3:33 PM No comments:
Email ThisBlogThis!Share to TwitterShare to FacebookShare to Pinterest
Labels: Arizona garden, desert garden

A Short Look at Palo Verde

And now we come to the beautiful Palo Verde (Parkinsonia) trees.  Parkinsonia includes a number of different species and at least one important hybrid.  They are among the most lovely of the native Sonoran desert trees, small and graceful, with a spectacular spring display of vivid yellow flowers. 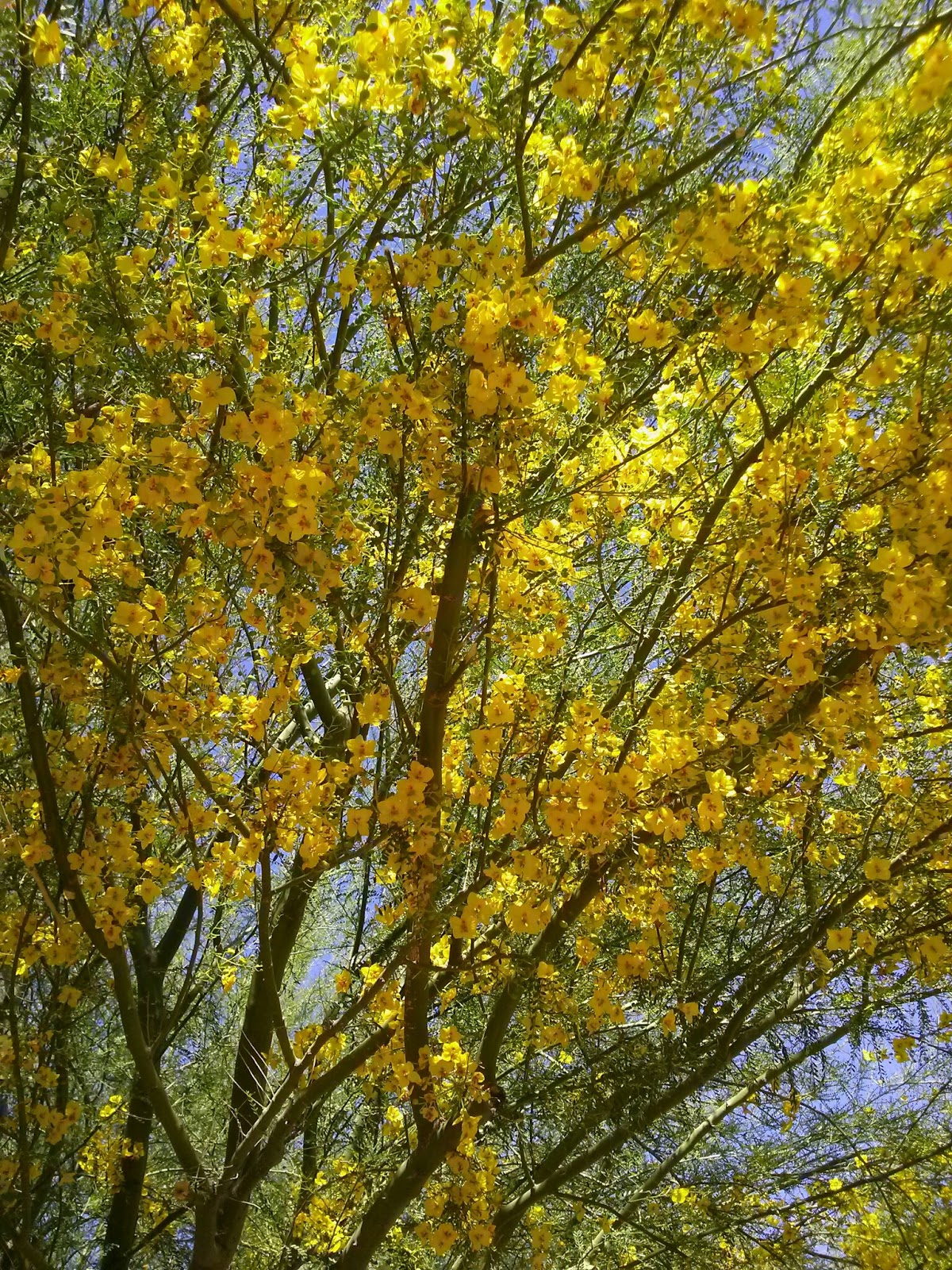 In the wild they can sometimes be seen forming large roadside thickets; additionally they are currently one of the trees of choice for town planting.  This use has been made even more desirable by the development of the widely-sold hybrid "Desert Museum".  Said (The New Western Garden Book, see bibliography) to result from a combination of P. aculeata, P. microphyllum, and P. floridum, this variety has the advantage of being thornless (unlike P. aculeata), large-flowered, and cleanly, since it produces little litter from seedpods. 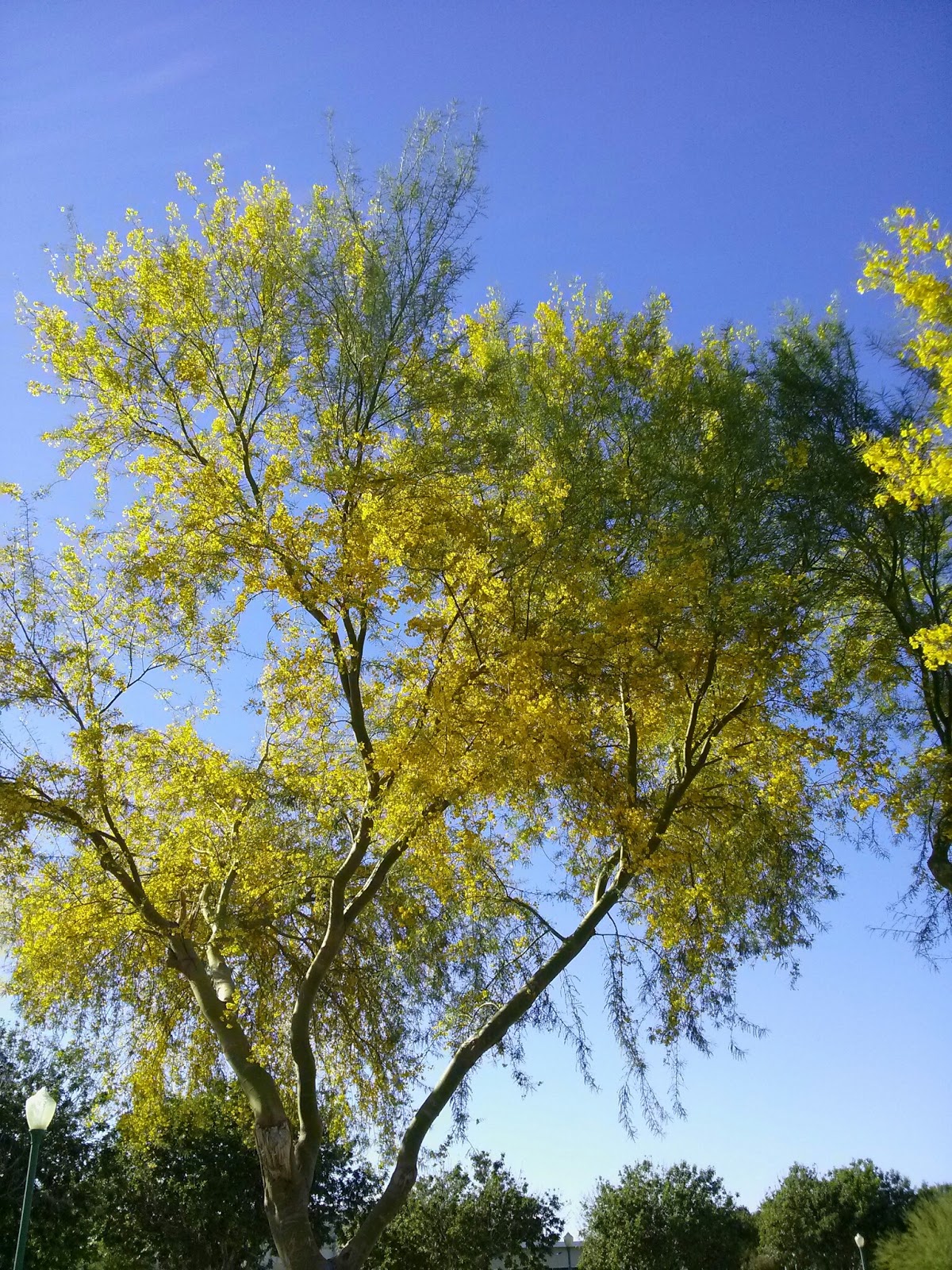 The different varieties are generally small (20 to 35 ft tall); some are faster growing than others.  "Desert Museum" and P. floridum are said to grow quickly; P. microphyllum is a slow grower.  The common name derives from the green bark color, which gives a pleasant hue even when the tree is out of leaf.  The leaves themselves are tiny; they and the many twigs provide only filtered shade. 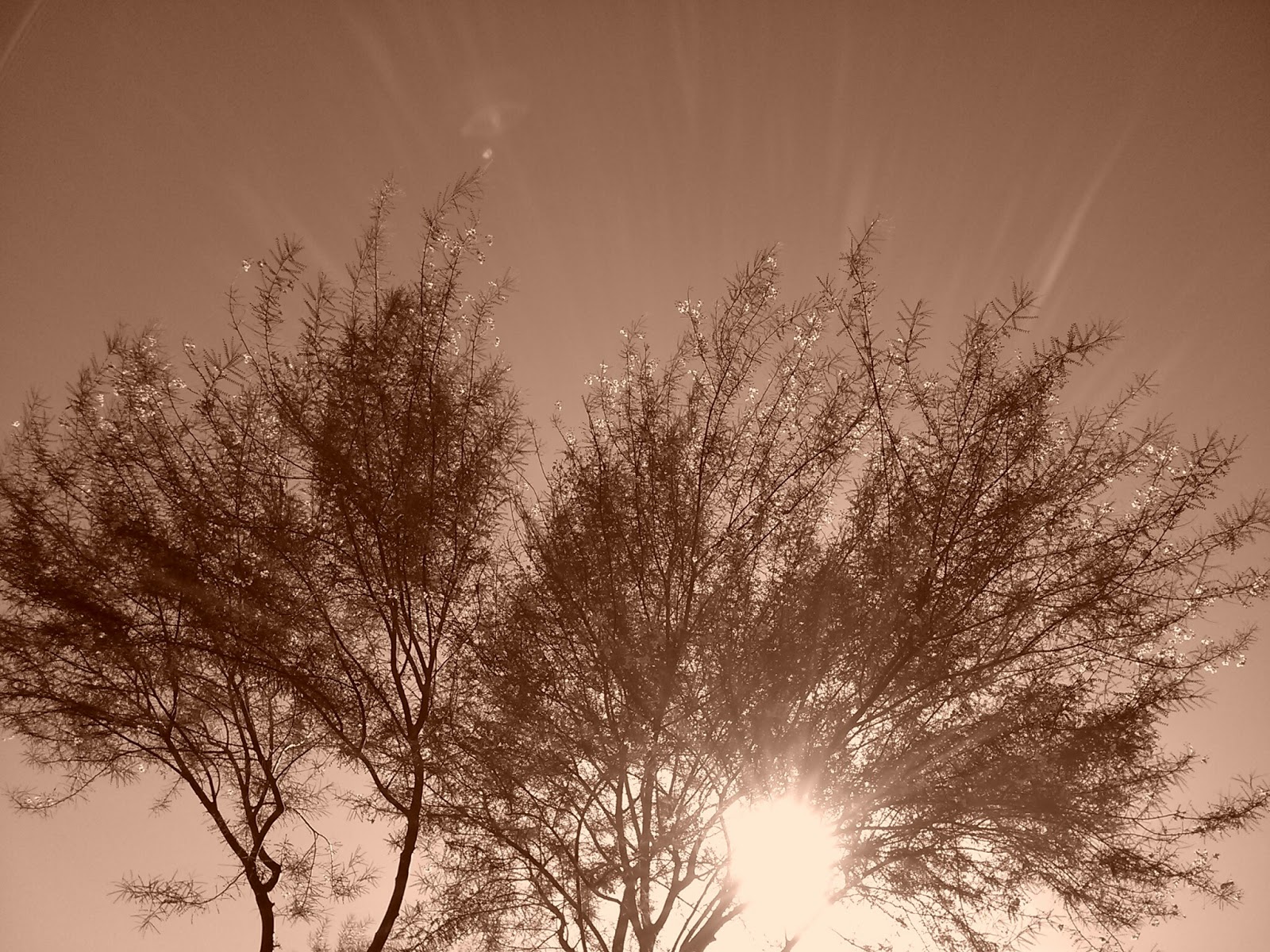 Happy with lots of sunlight and scanty water, these are classic plants for the desert garden. 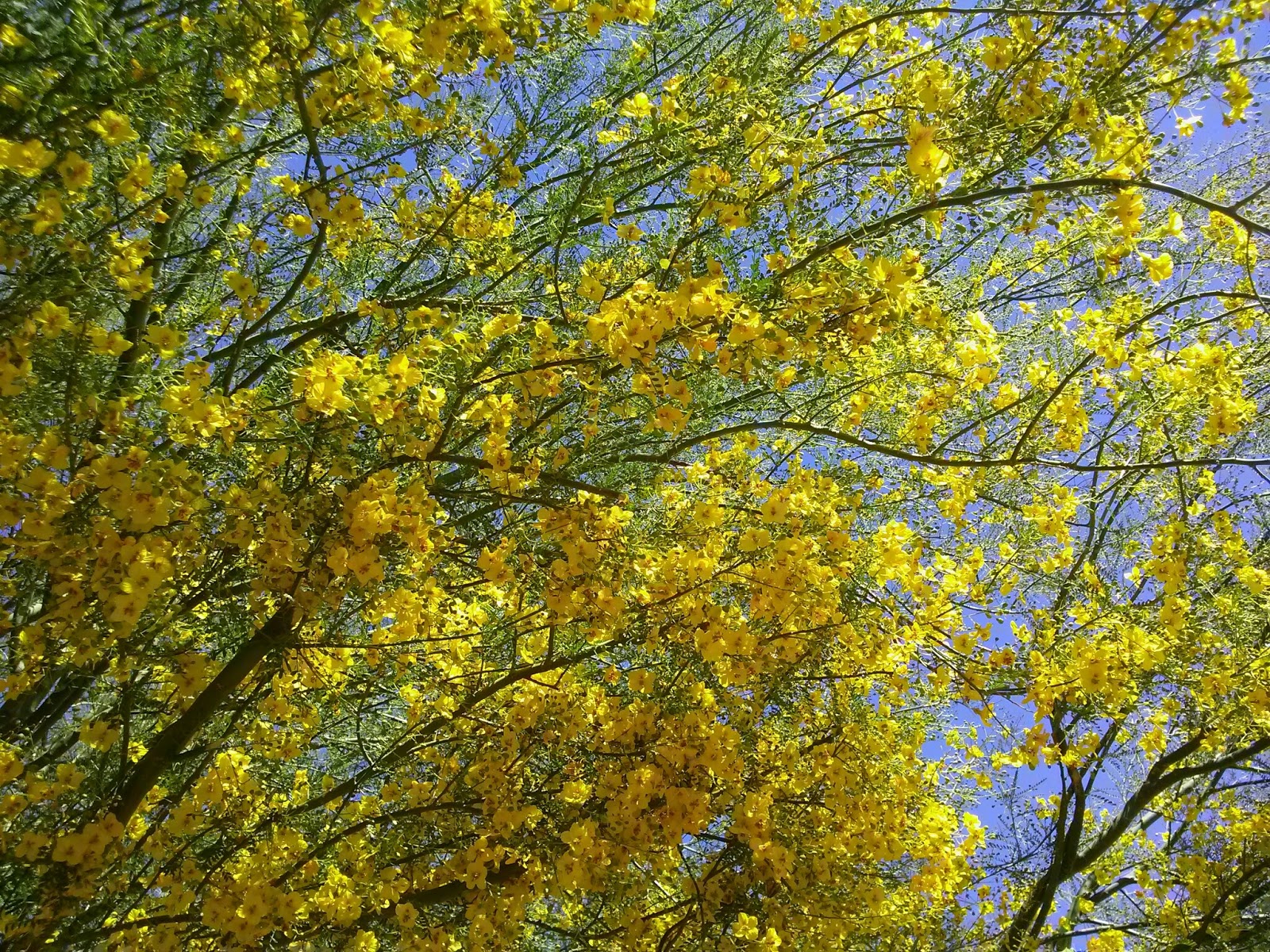 Another denizen of the desert: mesquite

Continuing with a look round at the native plants in the neighborhood, I introduce mesquite (Prosopis).  The mesquite of this region appears to be Prosopis velutina, the Arizona or velvet mesquite.  It is a small tree, often multi-trunked, with fine-textured, compound leaves, and fuzzy blooms rather like a catkin, followed by long seedpods. 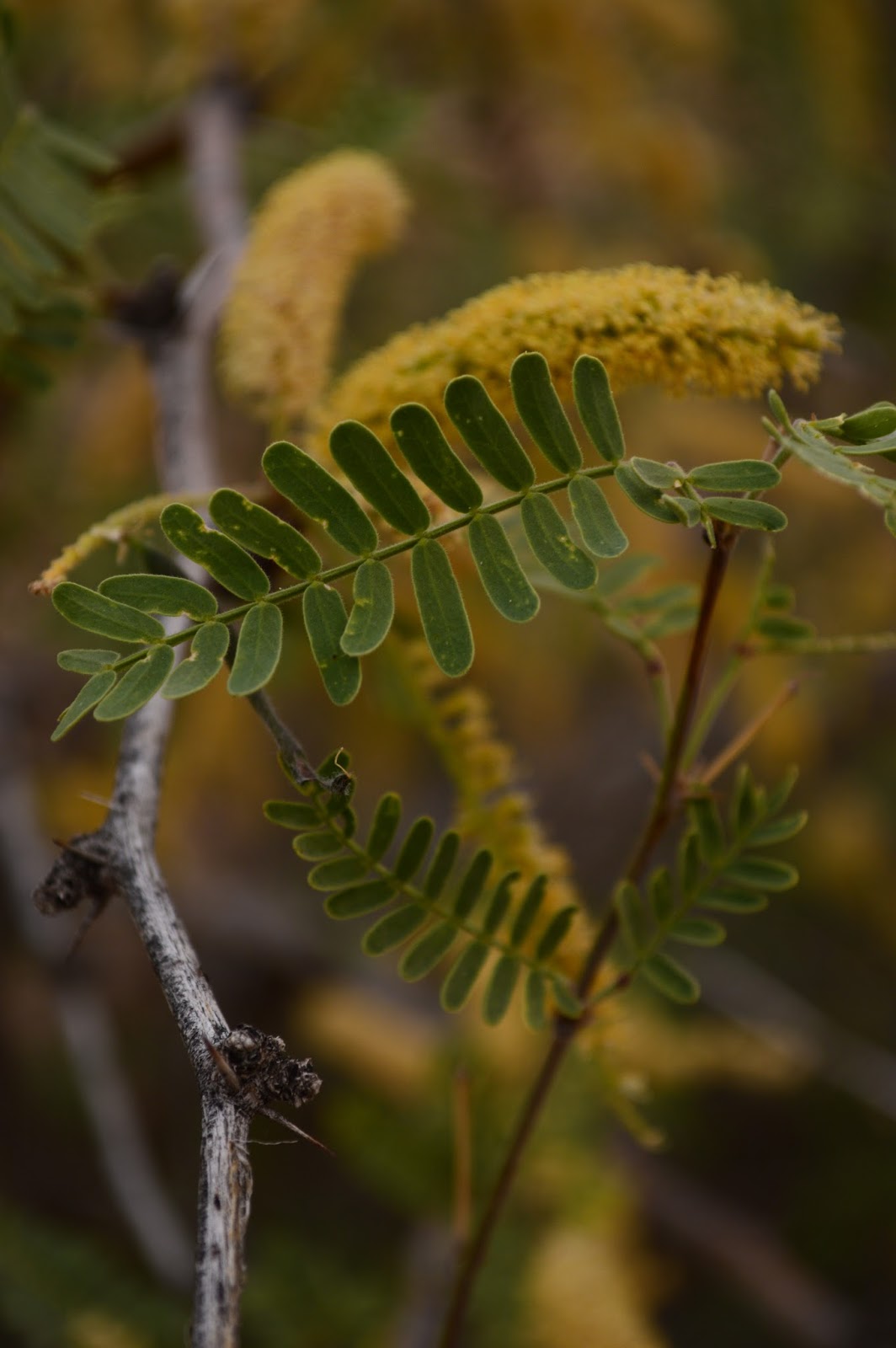 Although they have at best a rather rugged beauty in the wild, I have seen them growing handsomely in cultivation.  They have the makings of a pleasant shade tree of small to medium height with a nice spread.  However, they are thorny and their pods can create quite a litter, which I understand is attractive to rodents.  To counterbalance these difficulties, there is no doubt that mesquite is hardy and well-adapted to the area and, as I say, it can be a very attractive tree when given some care.  The leaves are finely divided but it gives the effect of a shadier plant than the other common tree of the area, the palo verde.  Of which more hereafter!

Here are a few more photos from last spring.  The flower clusters are profuse though their color is so quiet that one hardly notices the blooms. 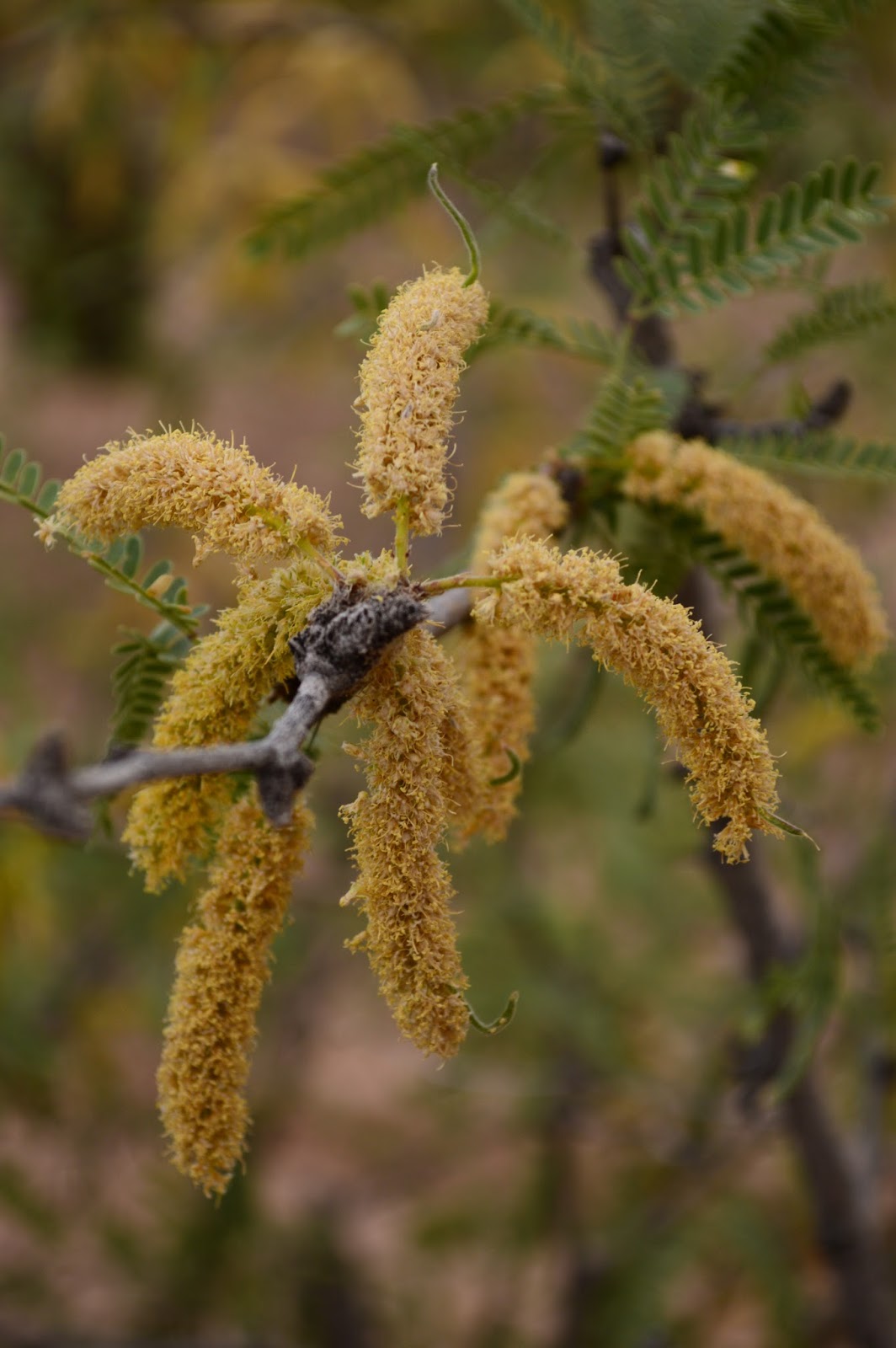 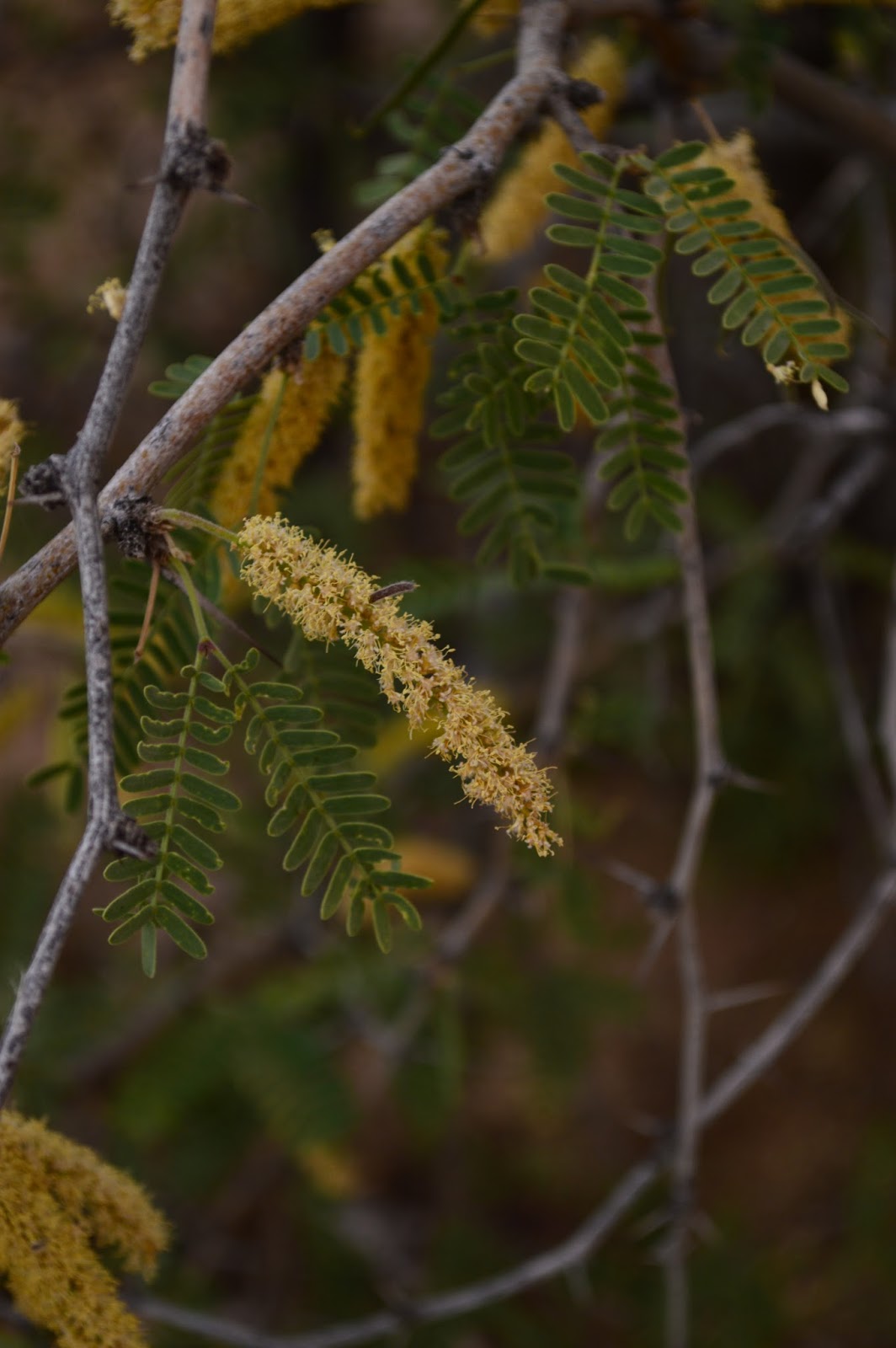 Angular branches are set off by delicate leaves and flower clusters after a rainy season. 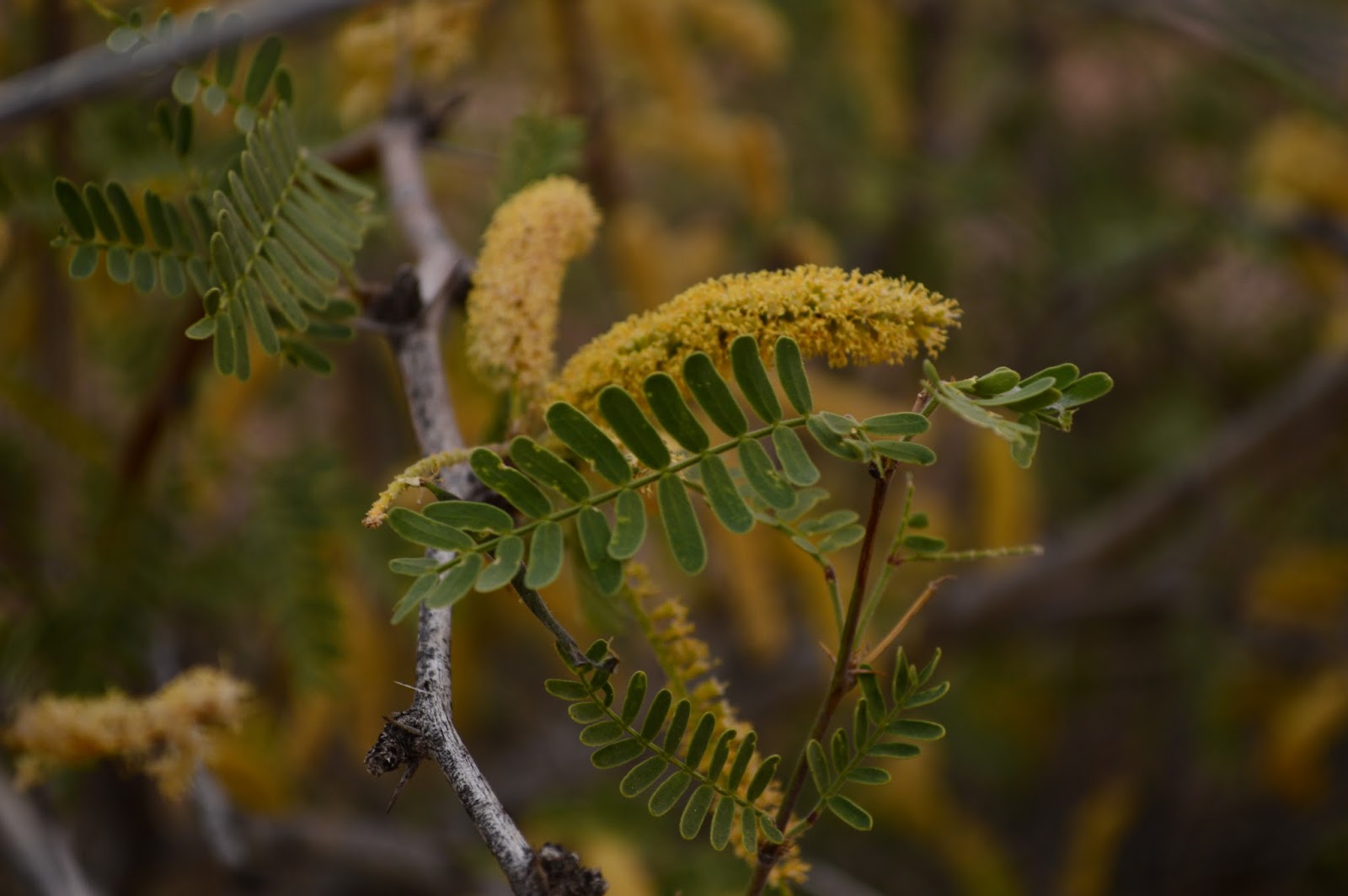 The Setting: a Little Bit of Desert

Though I am waiting for cooler weather to begin planting, I have been watching the wild plants around here for some months, watching and photographing.  Here are some of the local natives.

Surely the most ubiquitous plant in this area is Creosote (Larrea tridentata).  Depending on proximity to water, and perhaps other factors I am not aware of, this woody shrub can grow small or large, dense or open.  The dark leaves give off a strong, sharp fragrance after rain; this is the underlying scent of the region.  The flowers appear off and on through the year; they are small, bright yellow (almost sulphur yellow), single blooms.  Although fairly showy in person, they are difficult to photograph well... at least for me... 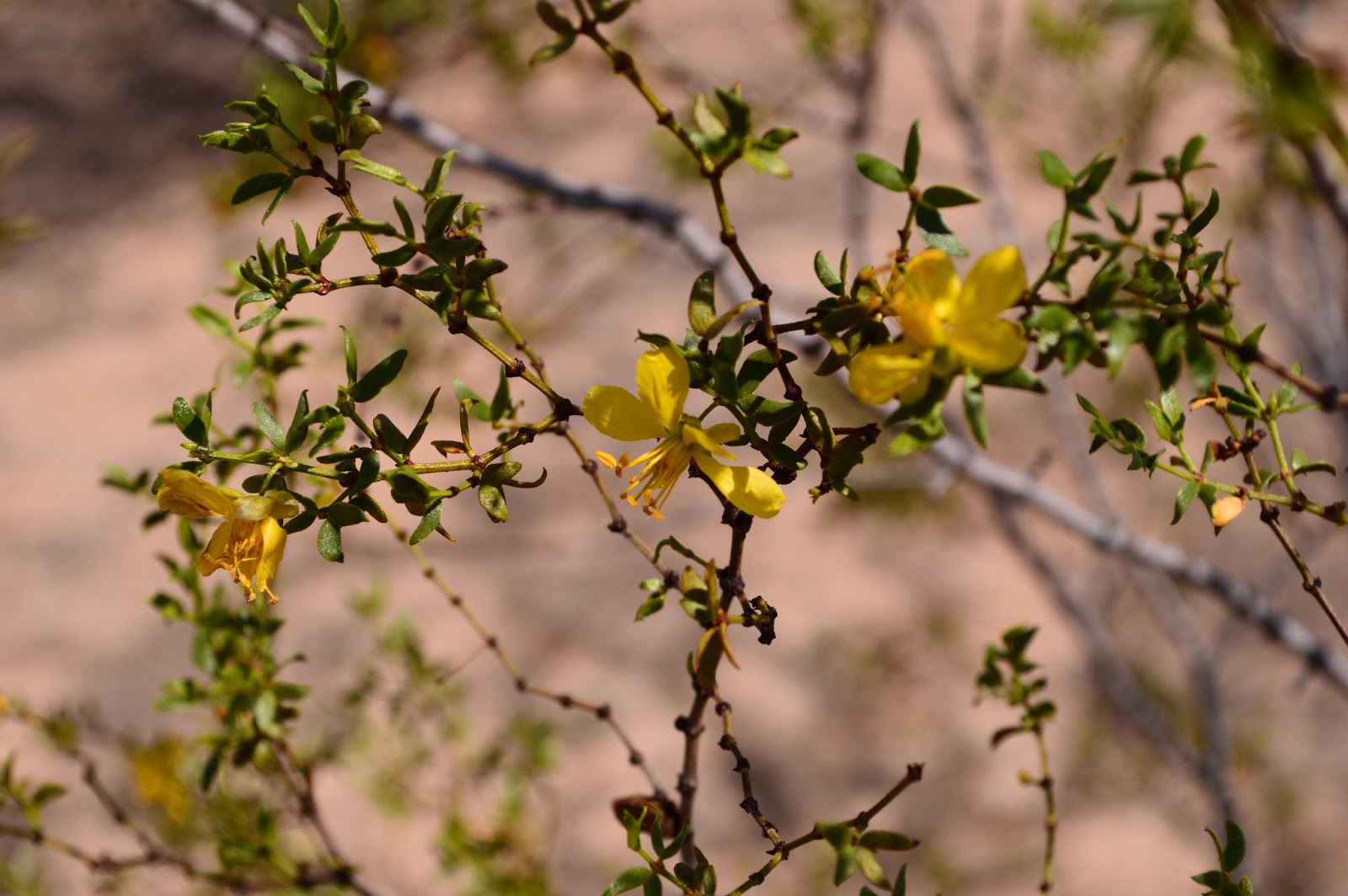 The blossoms give way to small puffballs of white. 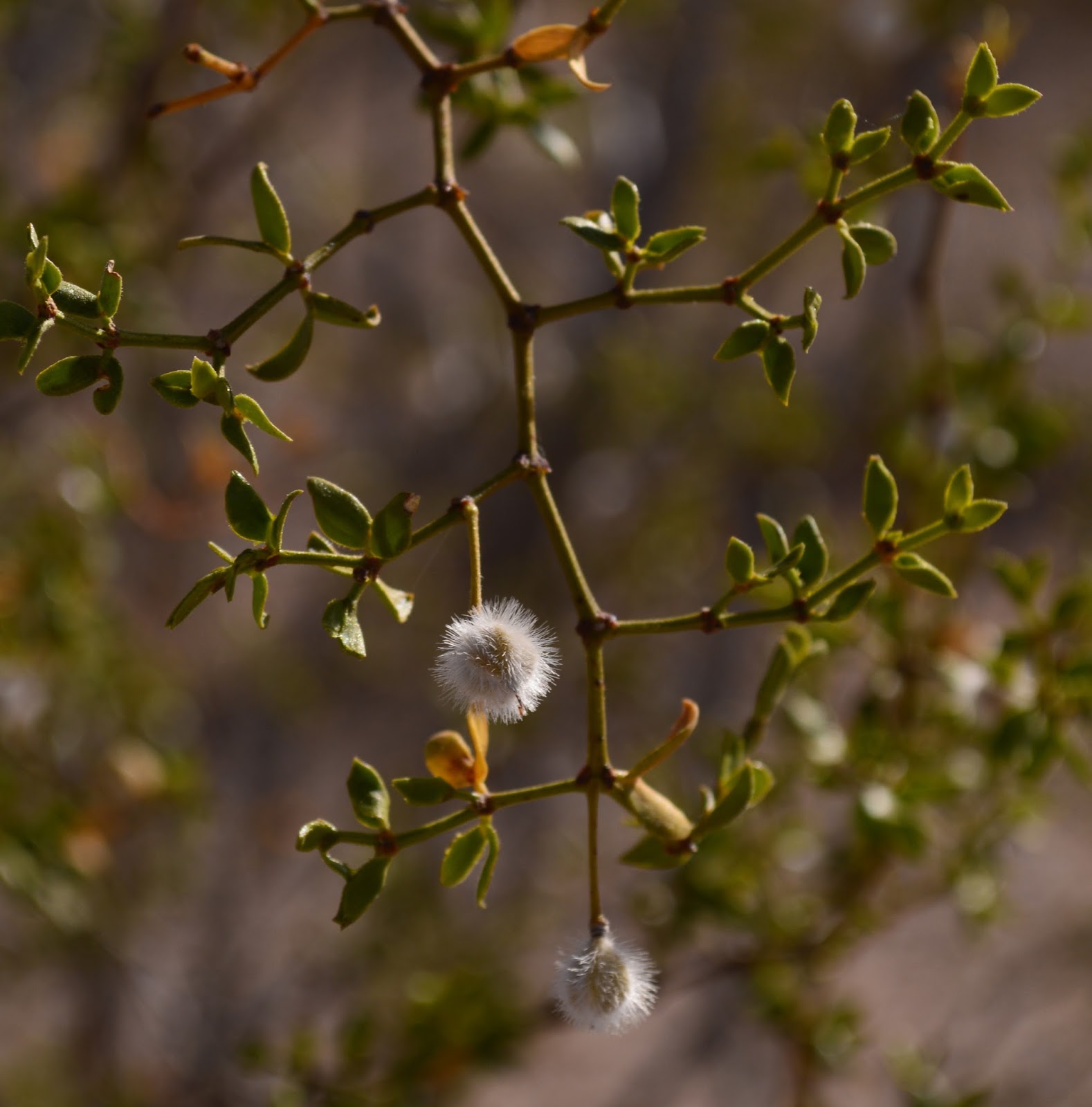 The branches and leaves form a strong pattern, especially against the clear Arizona skies. 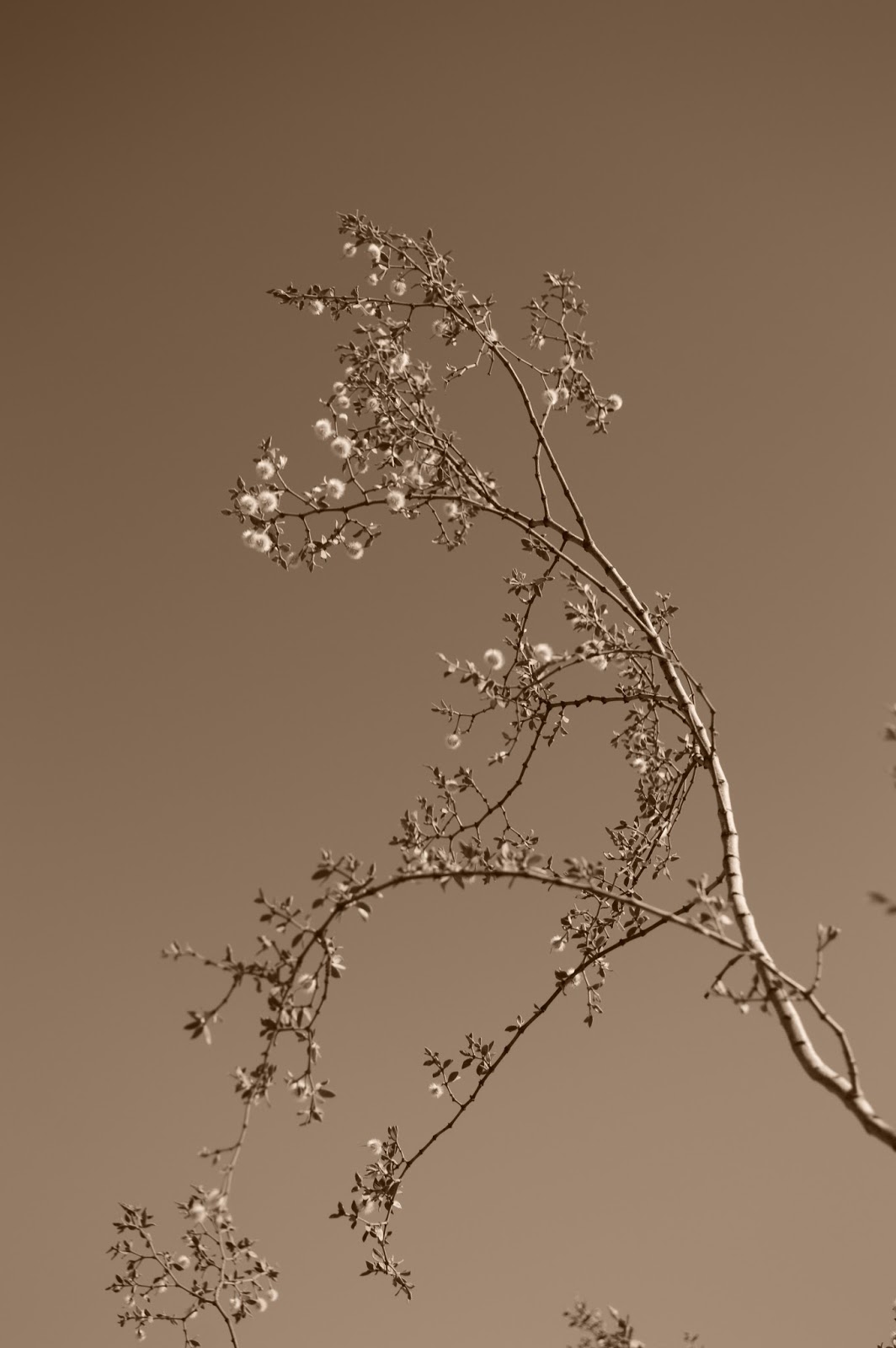 And it has one great advantage for the friendly gardener: it is not prickly, as so many desert plants are!
Posted by Amy@SmallSunnyGarden at 5:21 PM No comments:
Email ThisBlogThis!Share to TwitterShare to FacebookShare to Pinterest
Labels: creosote, desert, Larrea tridentata, Wild plants
Newer Posts Home
Subscribe to: Posts (Atom)