A Glimpse of the Garden 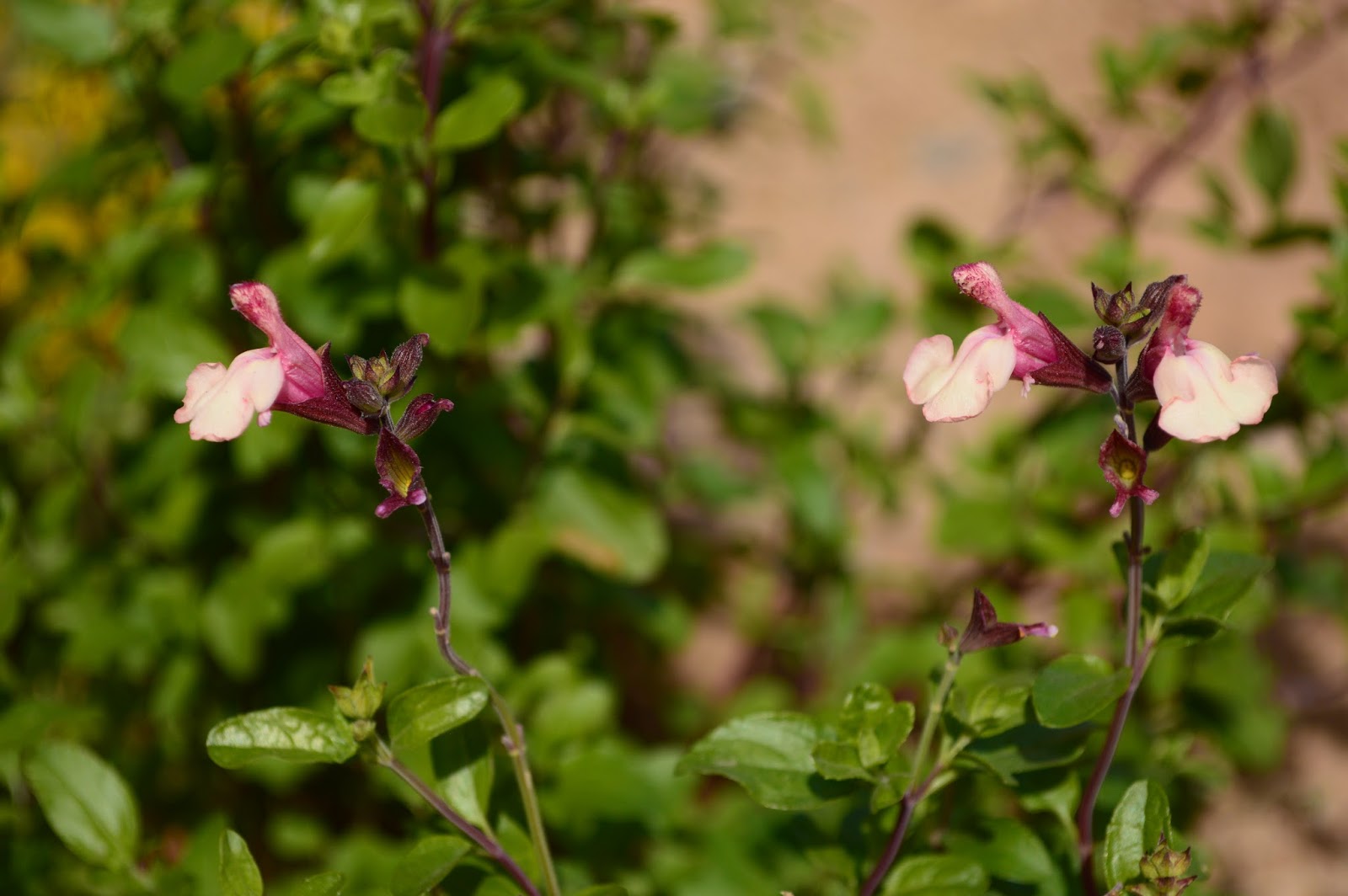 Here it is: the end of the first full month in my little desert garden.  In the small, sunny garden, everything still looks very haphazard, no doubt, to the casual observer; and even to me it looks like I was holding my breath while planting - which, figuratively, I have been.  About all that I can say is that the plants seem fairly happy.  Most are in bloom as the hot summer gives way to a beautiful desert autumn. 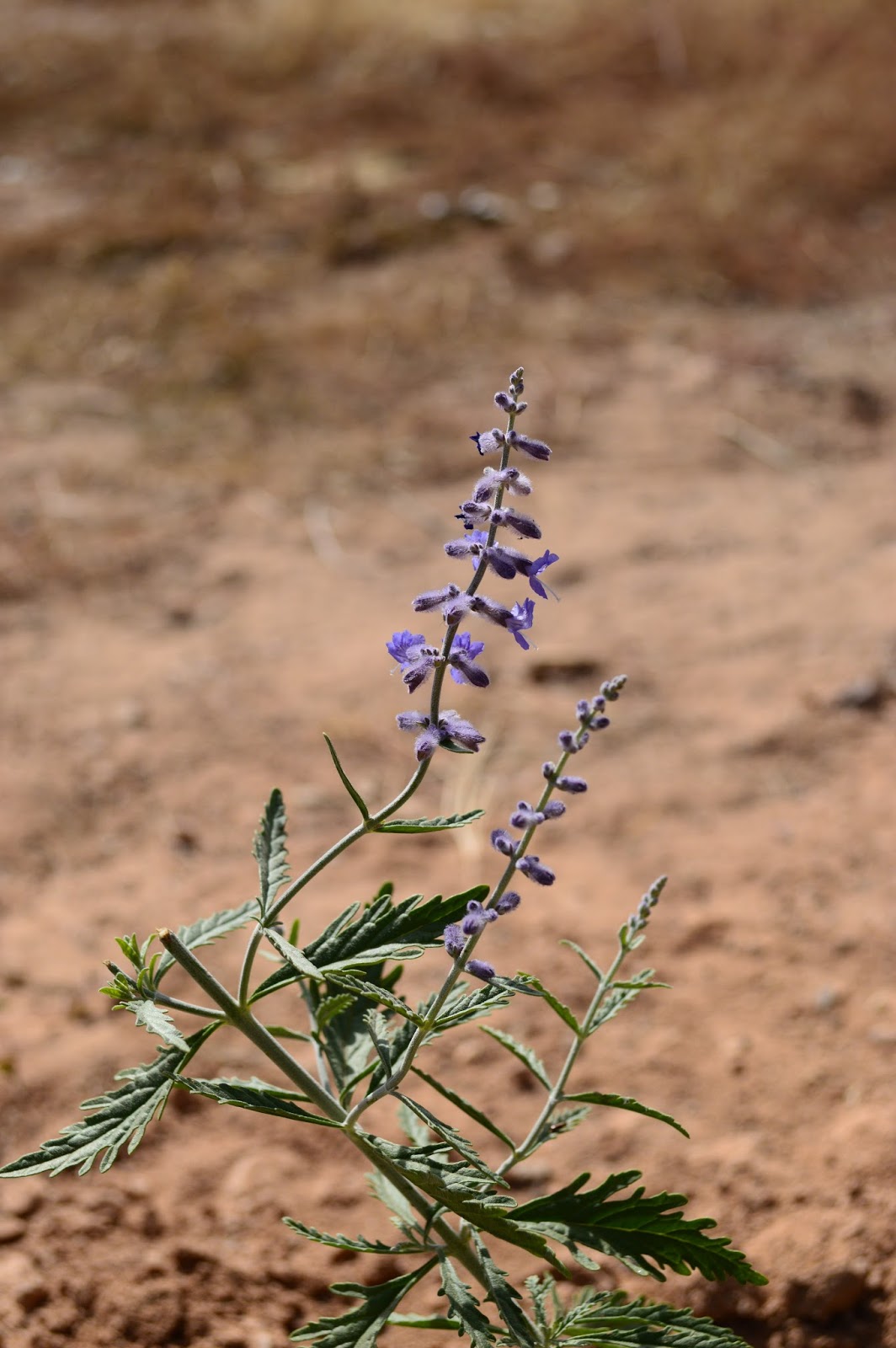 So here they are!  The Russian Sage (Perovskia atriplicifolia) bids fair to become a workhorse of the southern bed.  The little plant went from gallon-size pot to soil with barely a gasp.  It deserves a post all to itself and will have one soon, I hope. 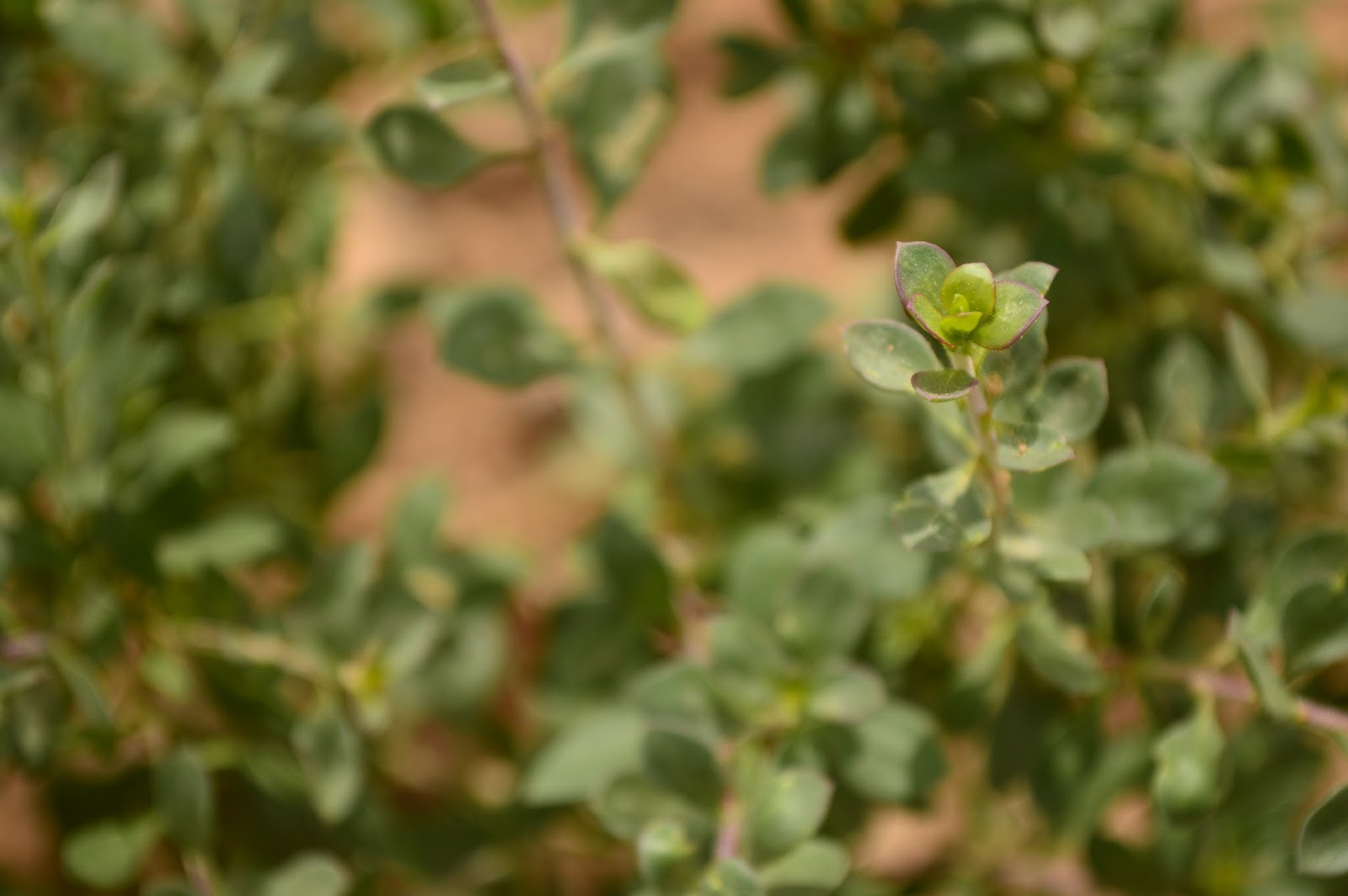 It is growing between  two different forms of Eremophila, the Australian Emu Bush.  They were among the first plants into the ground and are now putting out new growth.  I don't know what to expect in the way of first year bloom since they are small plants; but the shrubs themselves seem quite vigorous, not to mention tolerant of my confused essays in watering! 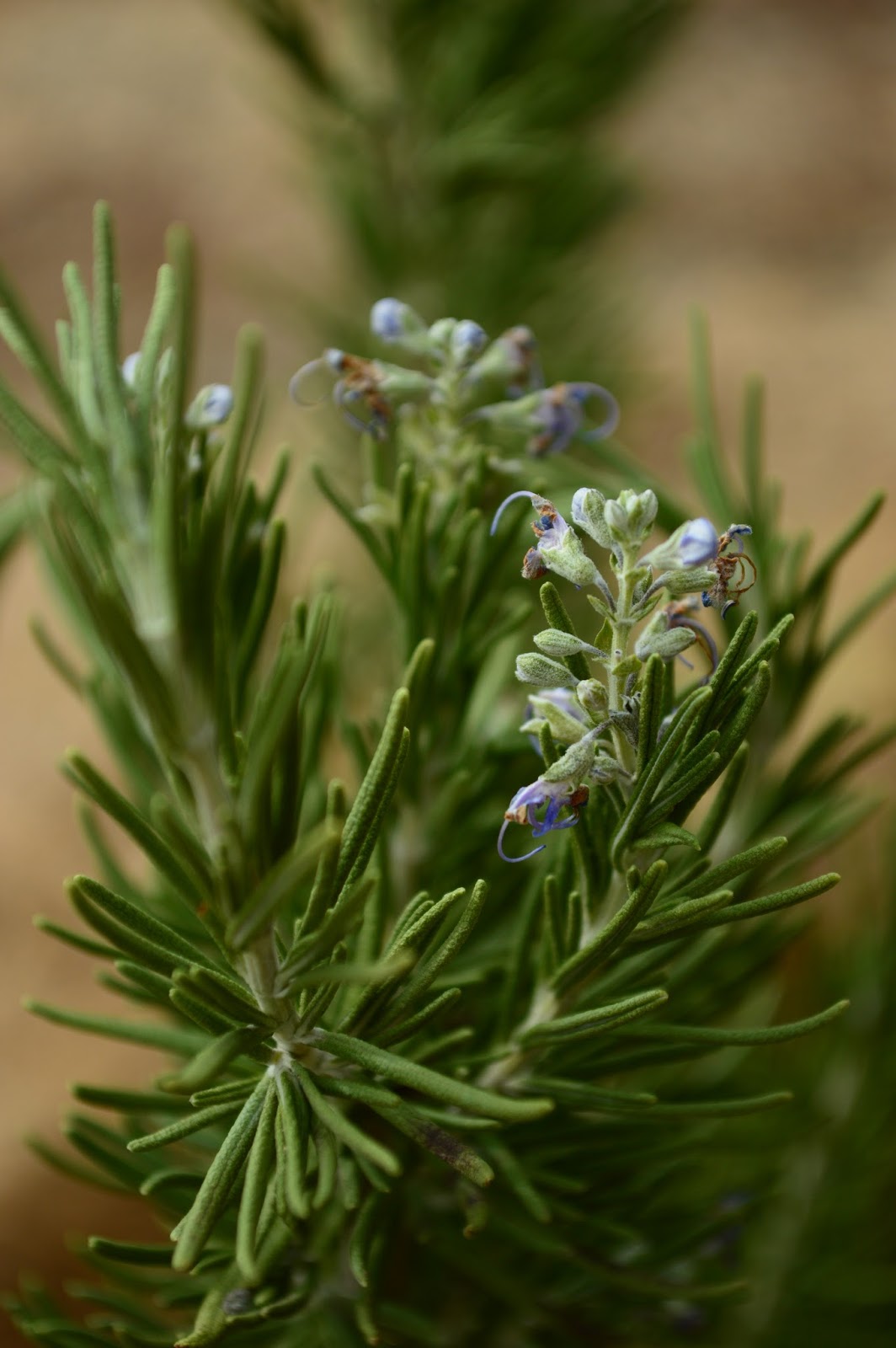 At the back of the southern bed, I have begun the hedge.  Now I do not have a good record in the matter of hedges, so I approach this one with a good deal of angst.  But I really do feel that this particular garden needs a formal hedge to wall it in from the bare land beyond, something to help create the sense of a special space.

I've chose to use rosemary (Rosmarinus officinalis) for several reasons.  Fragrance is, of course, one of them.  Another is their reputed tolerance of drought, heat, and alkaline soil.  Additionally, I need something that will grow fairly narrow.  So I am using the variety known as Tuscan Blue.  (The New Sunset Western Garden Book notes that this cannot be Vita Sackville-West's original version of the plant, as the flower color is light blue rather than dark.)  The Tuscan Blue variety available here is said to grow 18-24 in (46-61cm) wide.  I am perhaps making a mistake planting them on 18 in centers, but it looks all right for now....

I wanted to include a photo of the little hedge as it stands, but it's not much to look at yet!

Of all the plants, the Damianita (Chrysactinia mexicana) is the quietest, most unassuming little subject.  It has hardly changed a bit since it went into the ground nearly a month ago.  But it's not turning brown either.  It has some growing to do before becoming the anticipated 2 ft mound covered with yellow daisies! 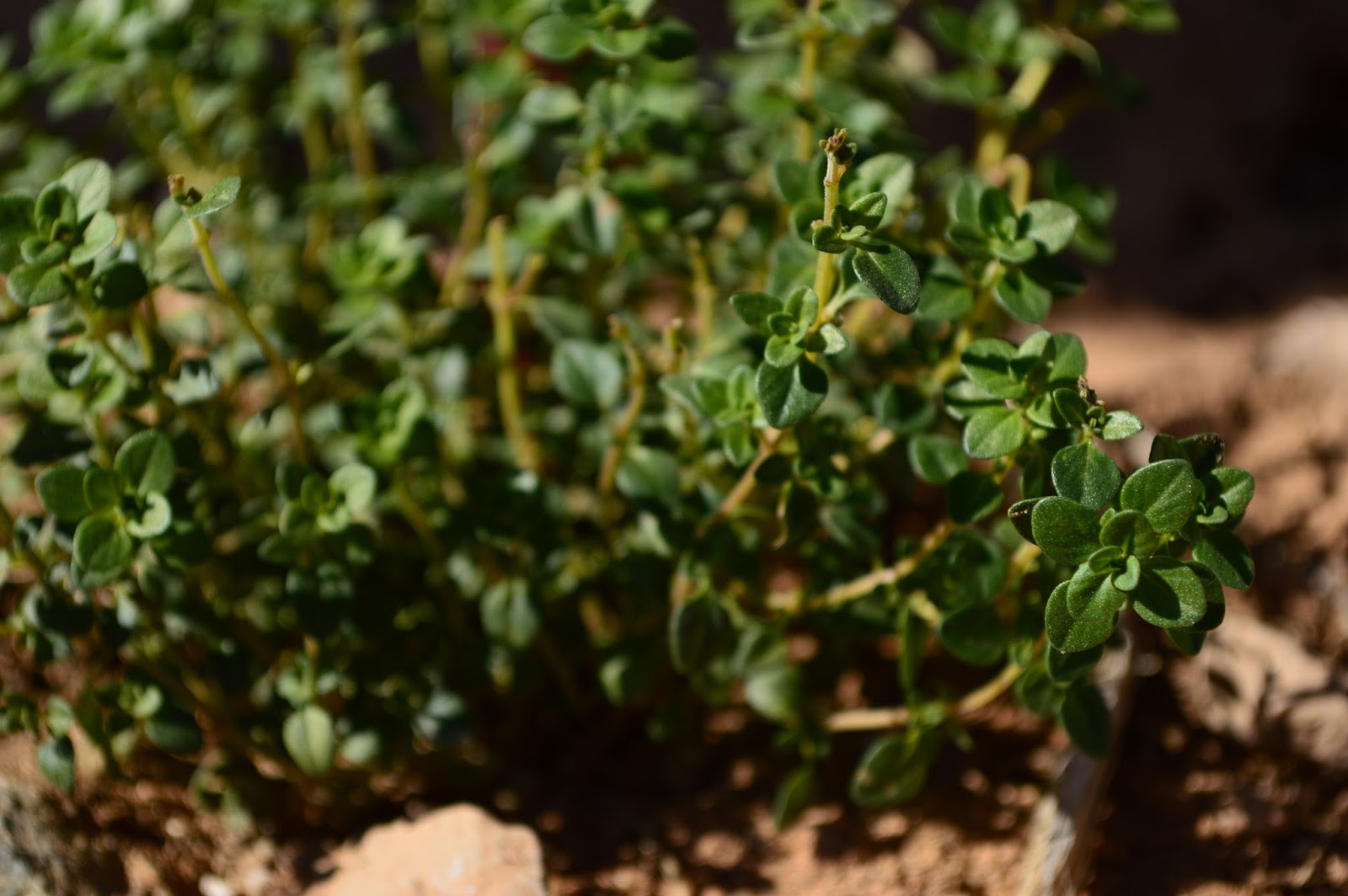 Another tiny specimen is my just-planted Lemon Thyme.


The only rose so far is Sterling Silver, following my theme of using lavender-colored flowers as a color baseline.  It looks the picture of health and has a nice, fat bud coming.

And finally, the unmistakeably autumn-blooming plants, Autumn Sage (Salvia greggii) "Autumn Moon" and the grass Muhlenbergia capillaris "Regal Mist".  I was worried about the browning leaves of the Pink Muhly grass until it started sending up its delicate feathers.

The Autumn Sage has adjusted well and is no longer requiring daily watering despite being in full bloom now.  It seems quite floriferous.  I love the flowers, which are both dainty and jaunty at the same time. 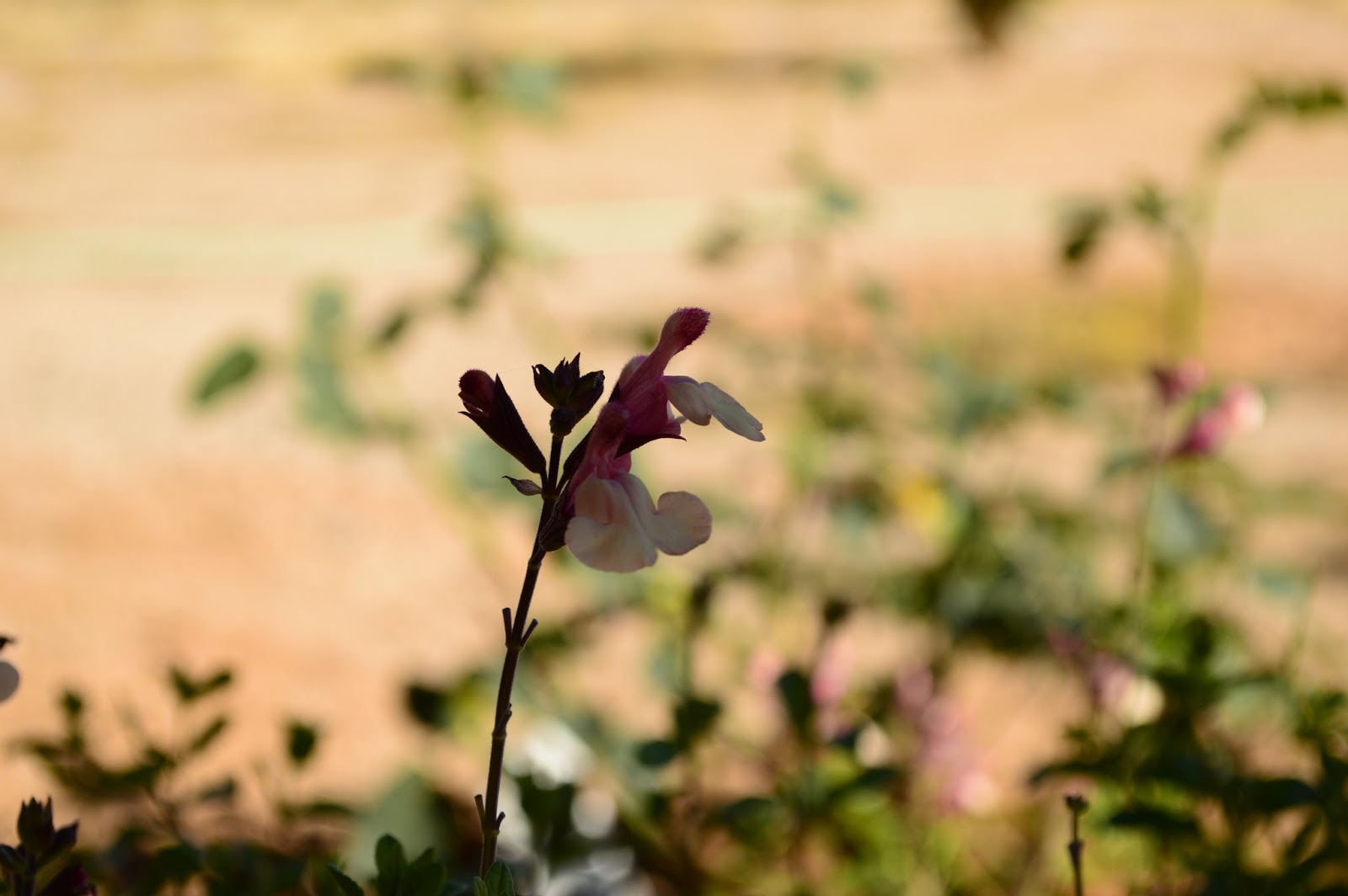 So that is my look round the garden.  Since I finally have a garden this month, I would like to participate in the End of Month View meme over at The Patient Gardener.  Here is the link to Helen's blog, which I have just discovered via Hoe Hoe Grow...  Thanks to all you garden bloggers for the inspiration! 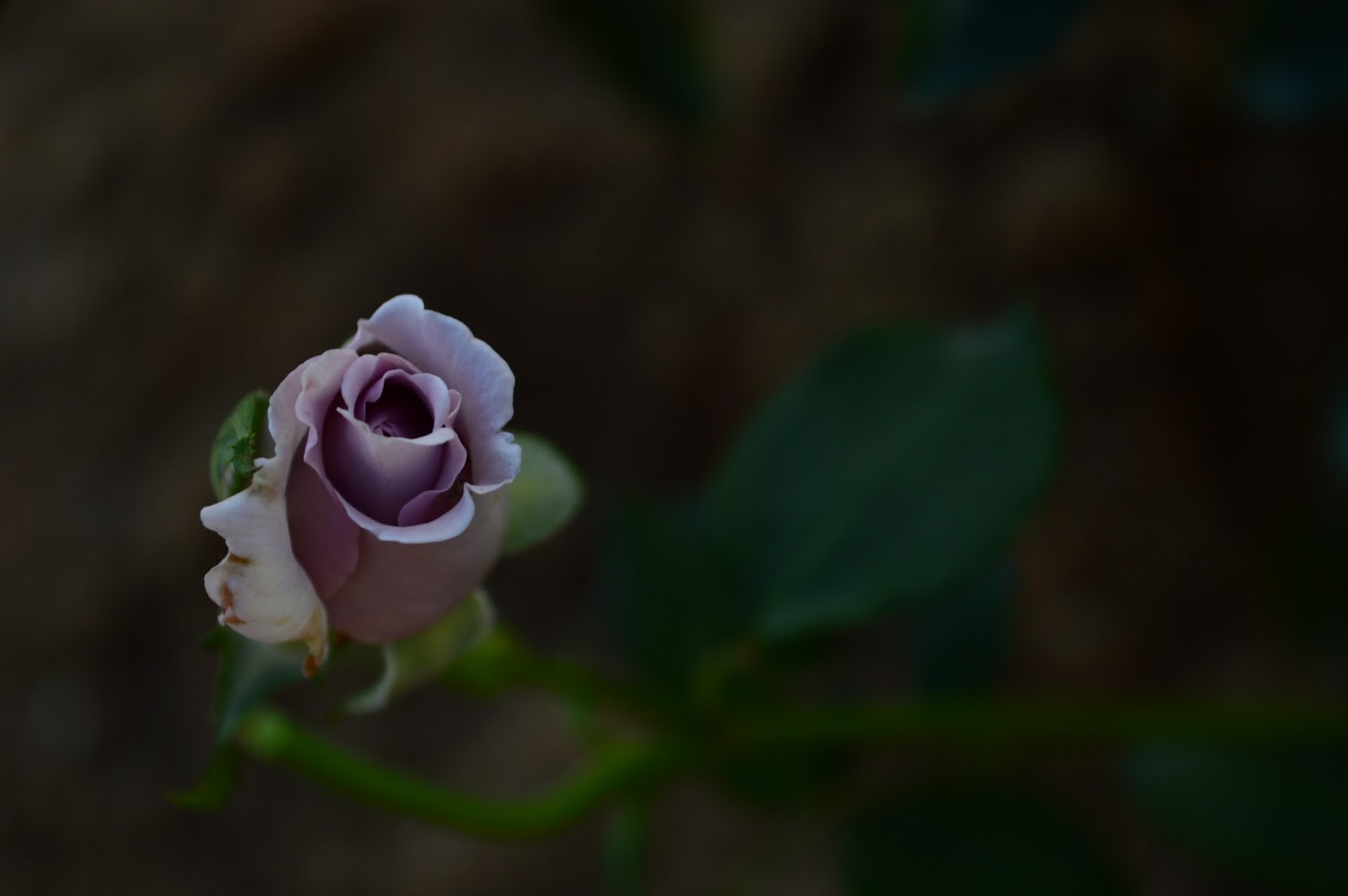 The first rose has just arrived in the little garden.  This was not planned.  But how could I resist?  A local garden center had just received a shipment, and the price was right, and ...well... they were roses.

Sterling Silver has the typical hybrid tea form so well loved since 1912, when the elegant "Ophelia" won the hearts of rose lovers.  Slender, vase-shaped buds and high centered flowers bloom on long stems.   Sterling Silver adds to these characteristics a light ruffling of the petal edges and a full, citrus fragrance.  (In my limited experience, it seems that a high percentage of lavender roses have a strong fragrance.  I would like to know whether anyone else has observed this?)

I grew Sterling Silver once before and did not find it overly vigorous; but this new bush looks good and sturdy, and I no longer have to contend with significant cold.  So I am giving it some garden space in order to enjoy those wonderful blooms. 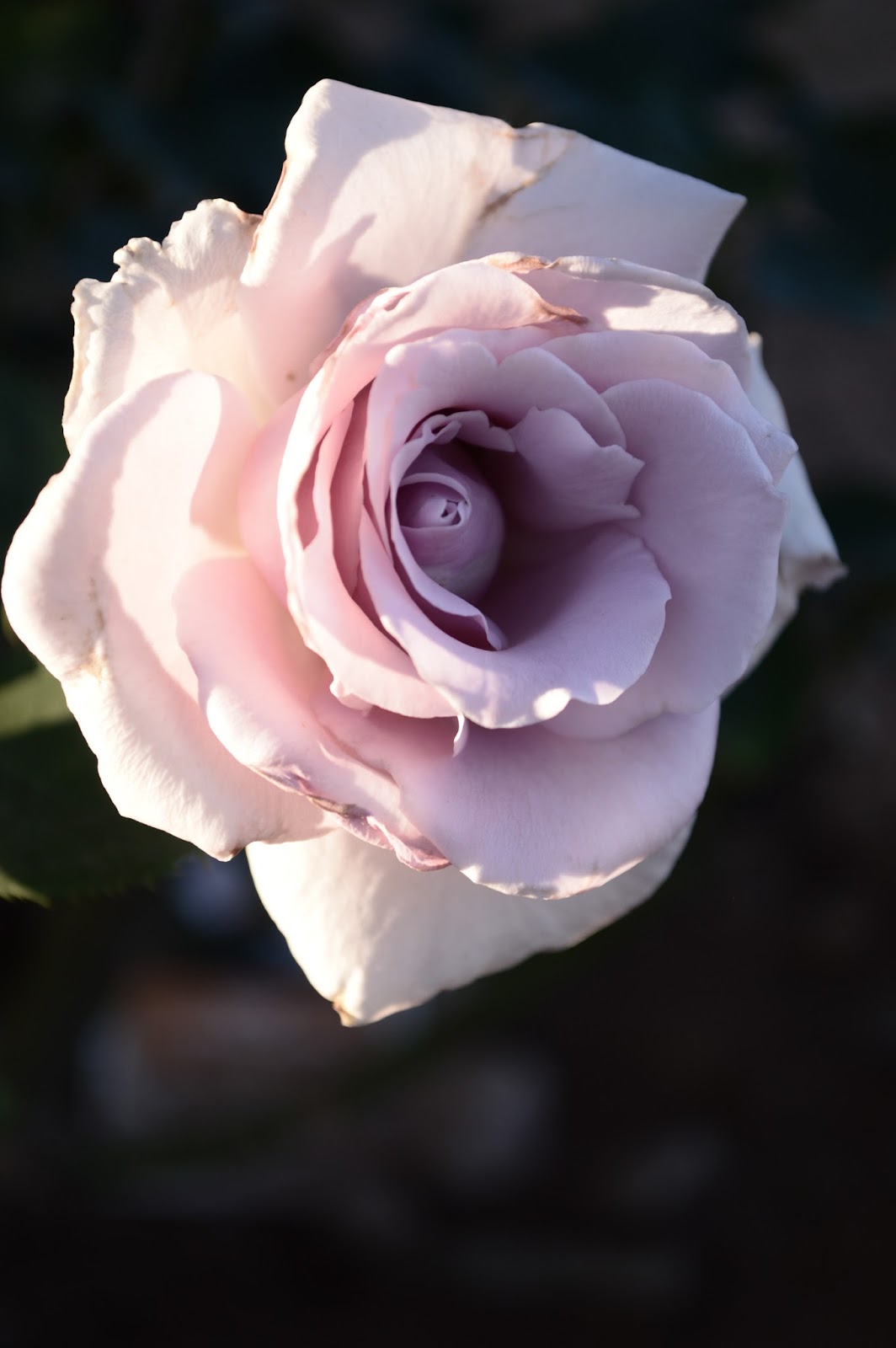 In particular, I am trying to use lavender tones as a basic color component in this garden - a way to control the inevitable clash of desert yellow and garden pink.  So I had an excellent excuse to choose this lavender-colored rose.

But who needs any excuse to enjoy this? 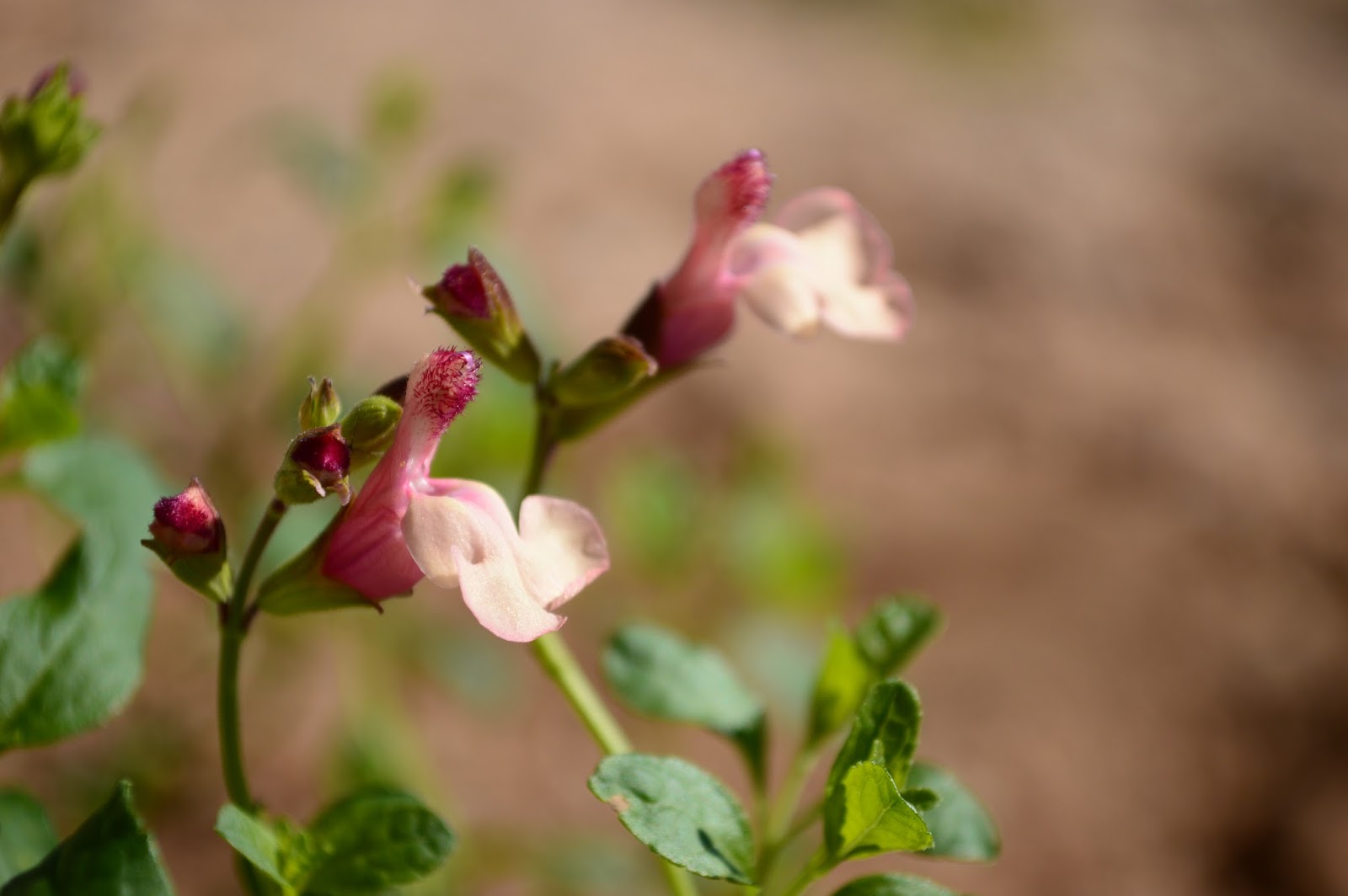 Autumn Sage (Salvia greggii) is one of many salvias suitable for hot, dry climates.  Shown here is the first Autumn Sage in my garden, the variety "Autumn Moon".  Bitone flowers are pale to darker lavender pink with a pleasant warm cast to the color; fresh green leaves are rounded and have a light, clean scent not at all like that of their classic culinary cousin, S. officinalis. The plant is, thus far, neatly mounded and quite attractive.

I found that the branches snapped easily so a little care should be taken when planting. 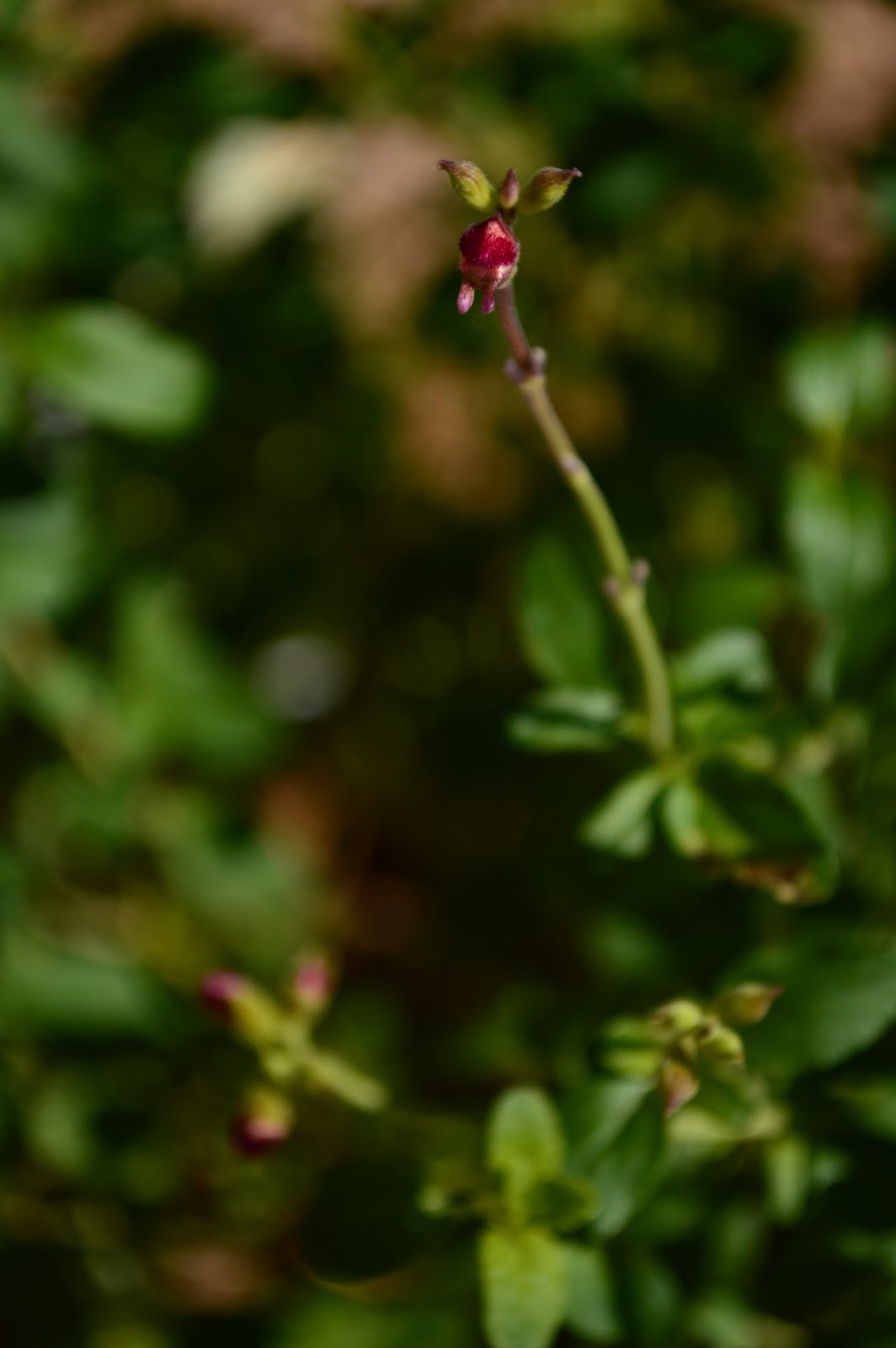 The tiny buds are deep pink...

Both Judy Mielke in her Native Plants for Southwestern Landscapes as well as The New Sunset Western Garden Book (see bibliography) recommend some shade for Salvia greggii varieties in low desert conditions.  They will also need some supplemental watering; certainly my little "Autumn Moon" is requiring daily water as it settles in (it's also just coming into full bloom).  These plants are, however, natives of the western US and are said to be generally drought-tolerant.  I have planted mine in a bed just next to the patio roof.  Here it will receive afternoon shade and a little more water and can grow with other plants of similar cultural requirements. 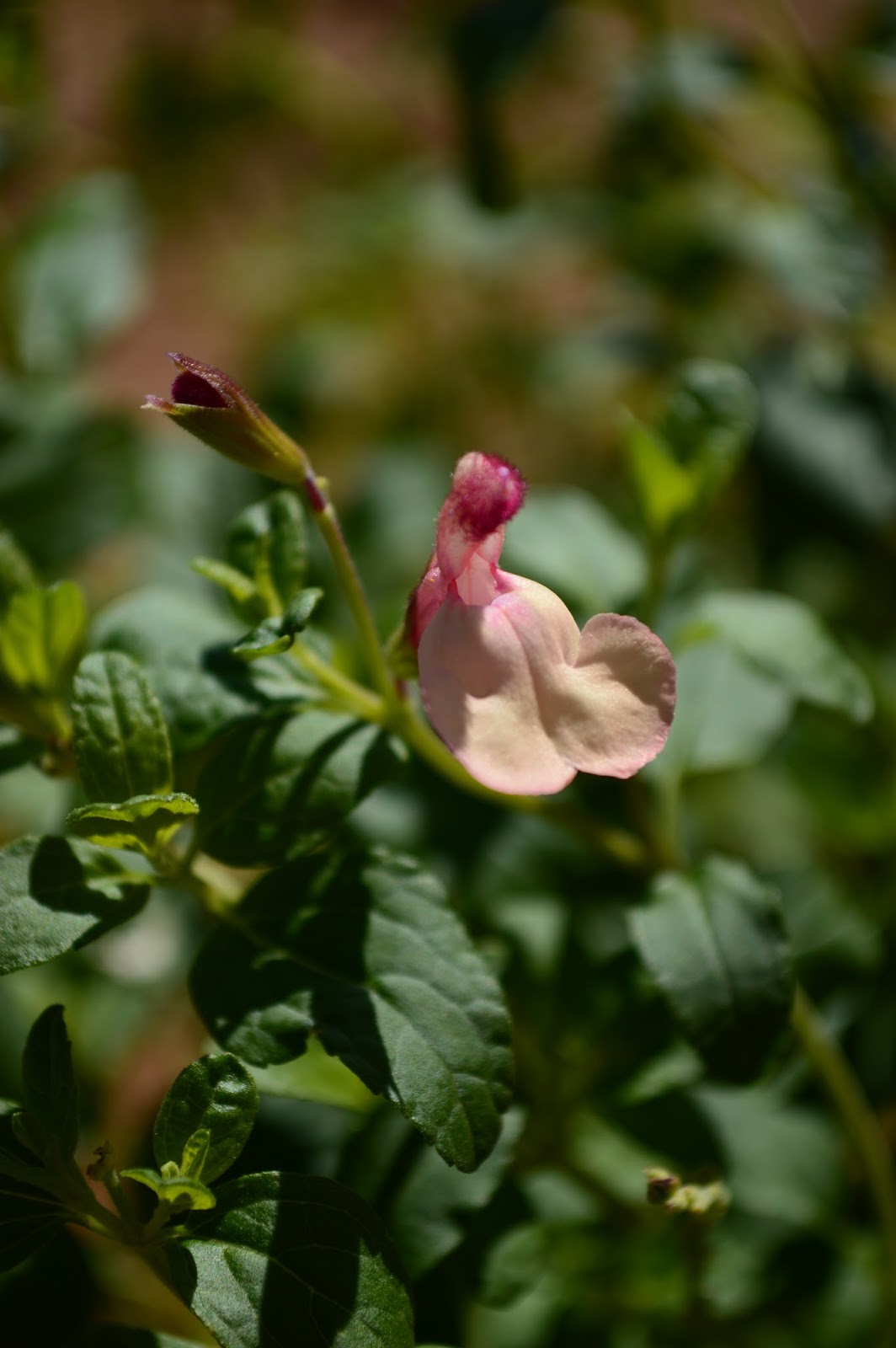 A Dry-Climate Iris and Star of Bethlehem 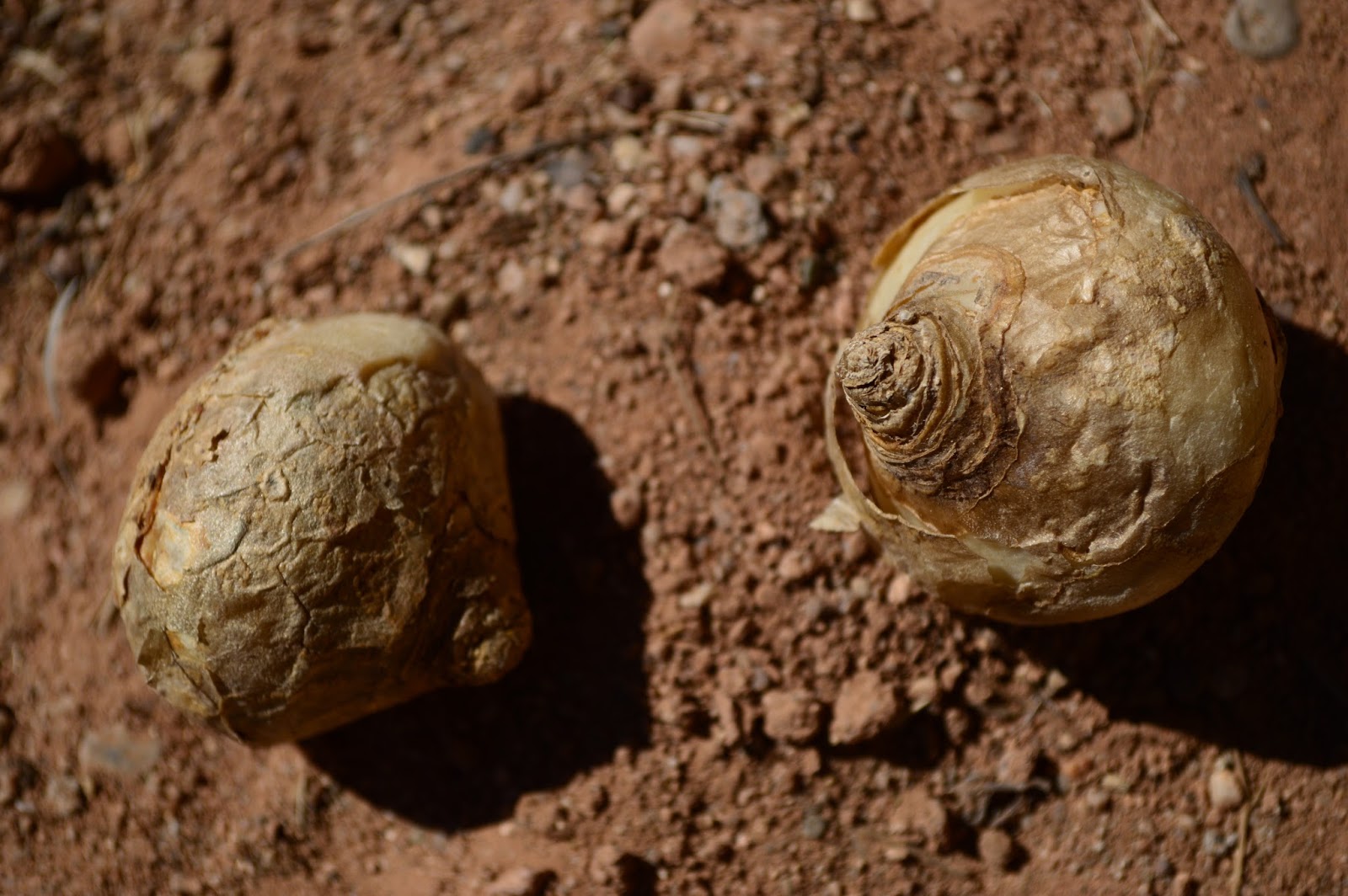 Like many another gardener, I find myself longing for plants that won't grow in my climate.  Since I contended for years with heavy soil and too much shade, I have a backlist of plants requiring full sun and well-drained soil. 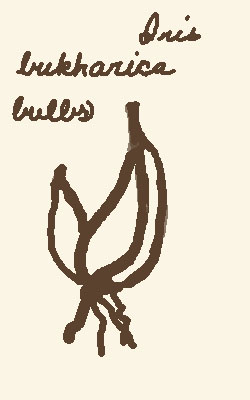 So here I am with full sun and, I hope, reasonably porous soil.  And it is autumn.  I have long promised myself to have a go at Iris bukharica if I ever had a drier garden site.

So the first I. bukharica bulbs are in the ground here.  I missed photographing the bulbs so am substituting a digital sketch... oh, well!  They are rather distinctive bulbs with their pale, yellow-tinged surface and fleshy roots.

Planting instructions that came with the package recommended a spacing of seven inches.  I checked on the RHS website and found a recommedation of .1m, or about 4 inches.  I opted to use the closer spacing, partly to have a denser look and partly to allow for my misgivings about the plants' capacity to flourish here.  It takes some getting used to - the idea of growing much of anything in the ground here!  However, I have hopes for my little I. bukharicas; and who knows, if they grow well, I may attempt some of the other Aril irises!

Also in the order was a half dozen Star of Bethlehem (Ornithogalum arabicum) bulbs.  I did manage to photograph these... 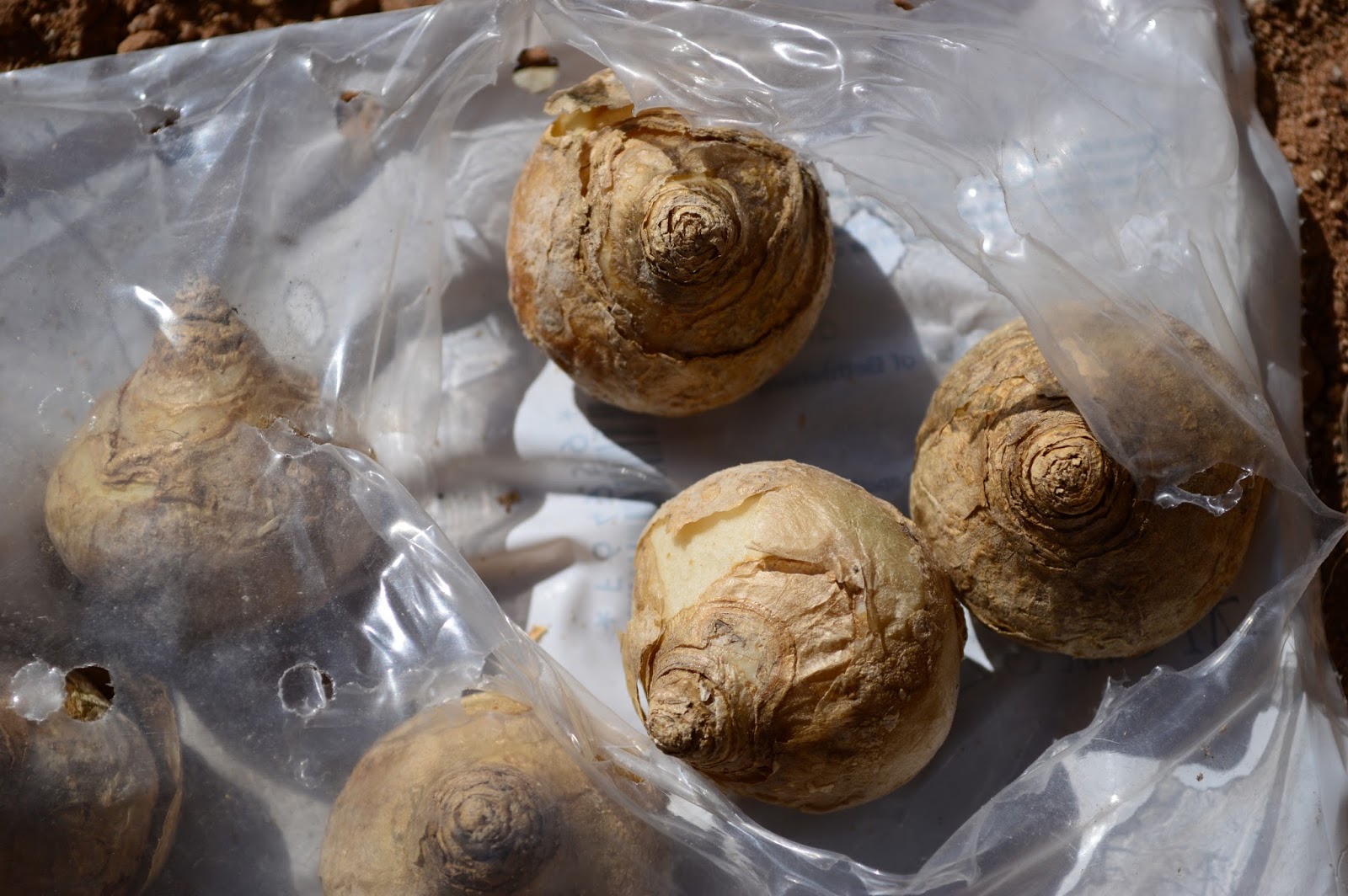 They went in at about the same spacing as the irises.  I have never grown any of the ornithogalum species before and am looking forward to seeing them in my garden for the first time.  But for now, I have buried six bulbs some 4 inches deep in Arizona soil and will have to wait... 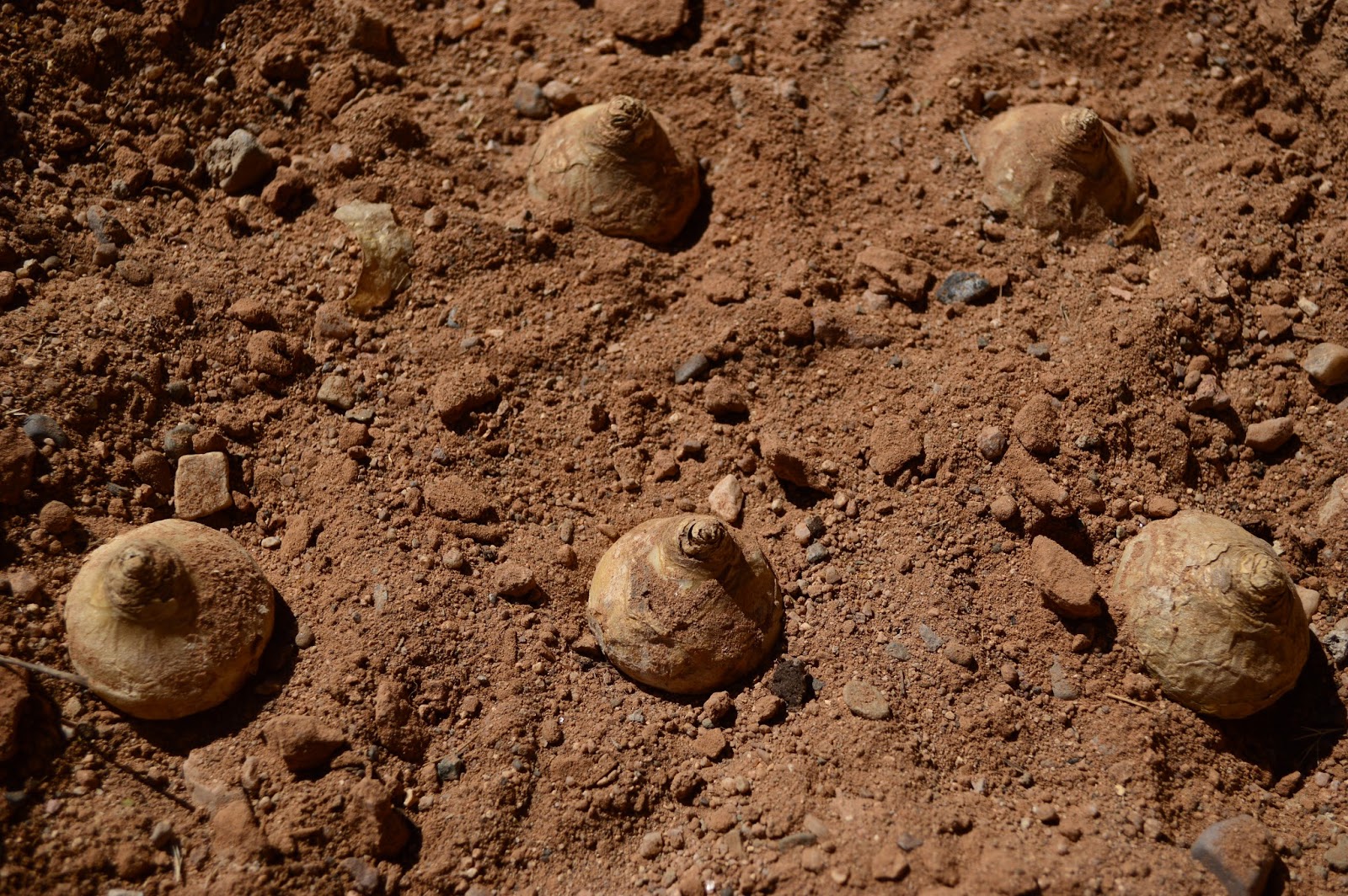 One of the more nerve-wracking elements in all of this is the question of how moist to keep the soil.  I find it a little more retentive than I had assumed.  I used less soil amendment with the bulbs because I discovered that instead of buying woodland mulch, I have now purchased nice manure - twice!  But that's another story.  In the meantime, I am hoping drainage will be all right.  Time will tell! 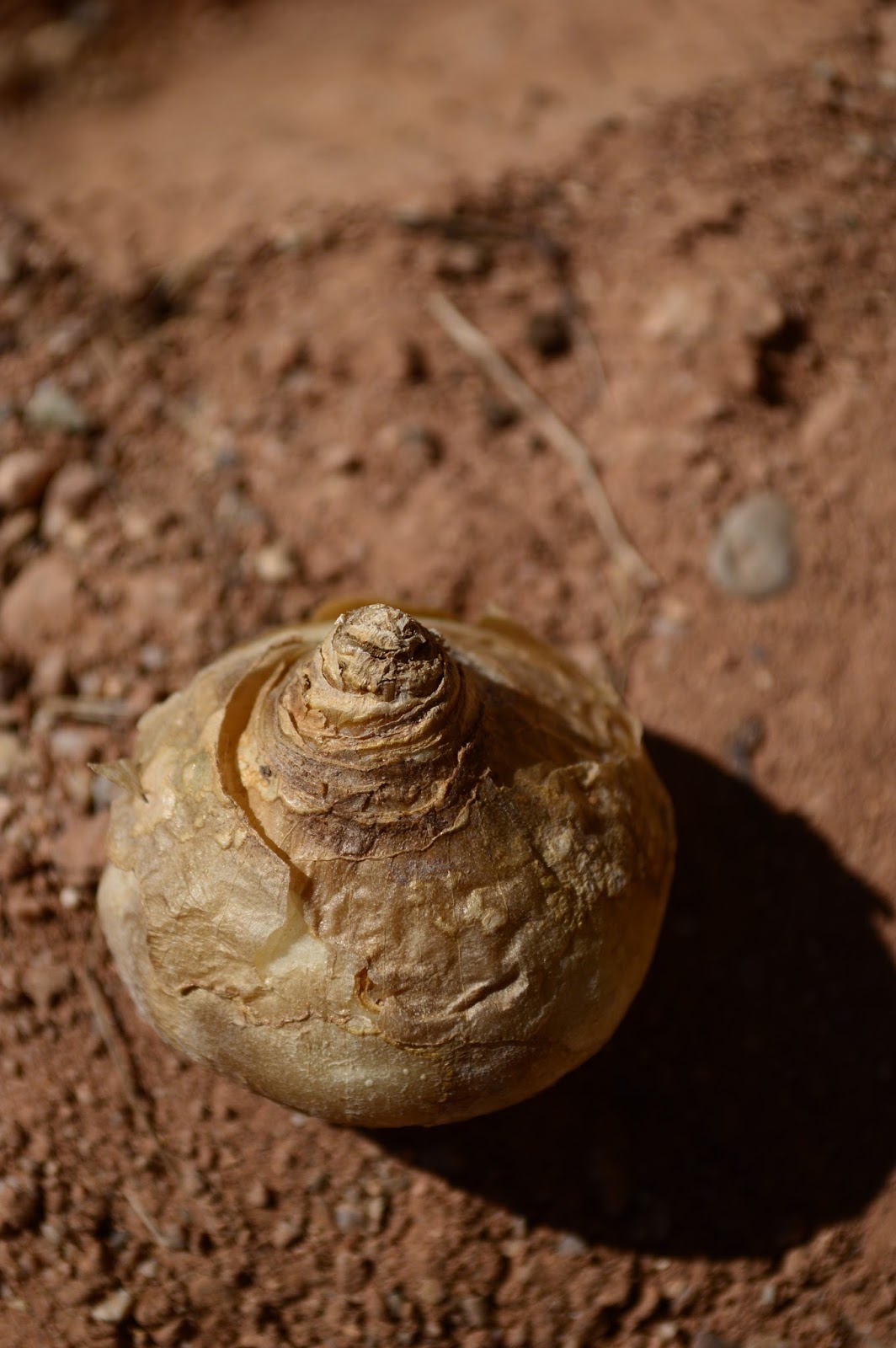 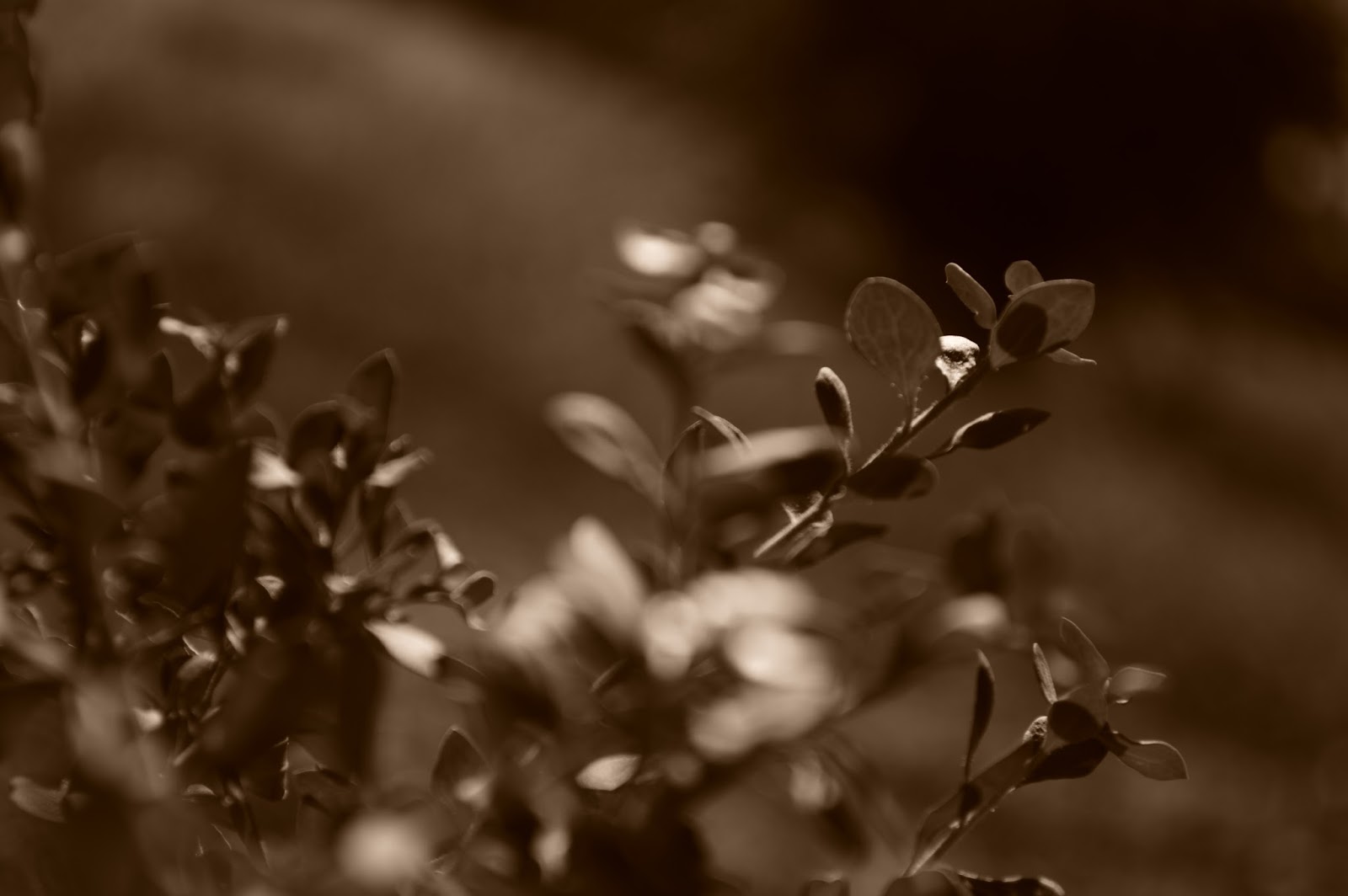 The two eremophilas have been planted and are settling in nicely.  Although I will have to wait a little longer to see the blooms (both varieties are expected to have yellow flowers), I have been enjoying the leaves... with a camera... 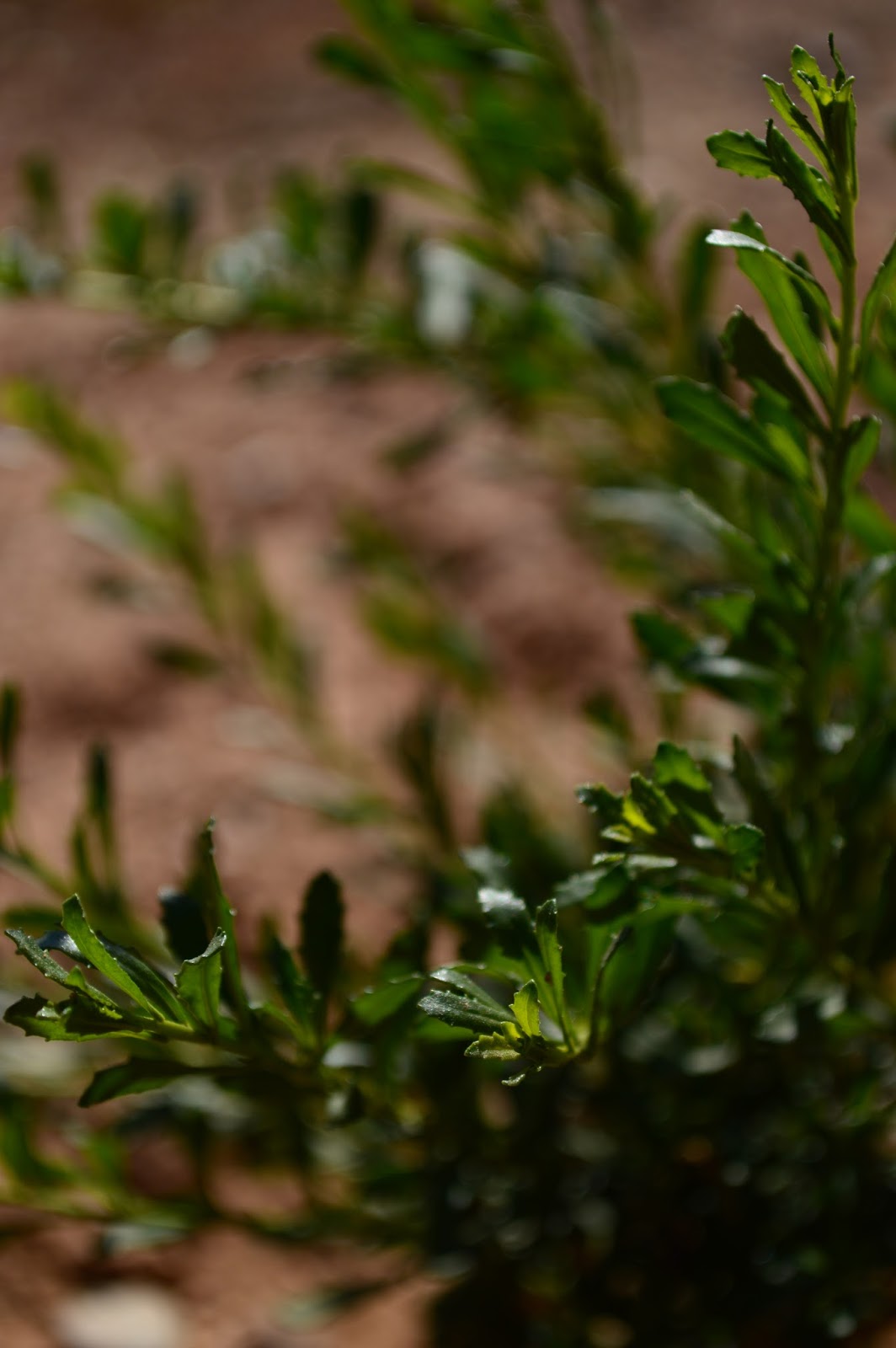 The leaves of the two are noticeably different, but both are fine-textured and have a happy effect of "green plant".

One - I believe this is the prostrate-growing species - has dark green, elongated leaves.

The other has softly rounded leaves, a little more gray-toned and with faint burgundy edges. 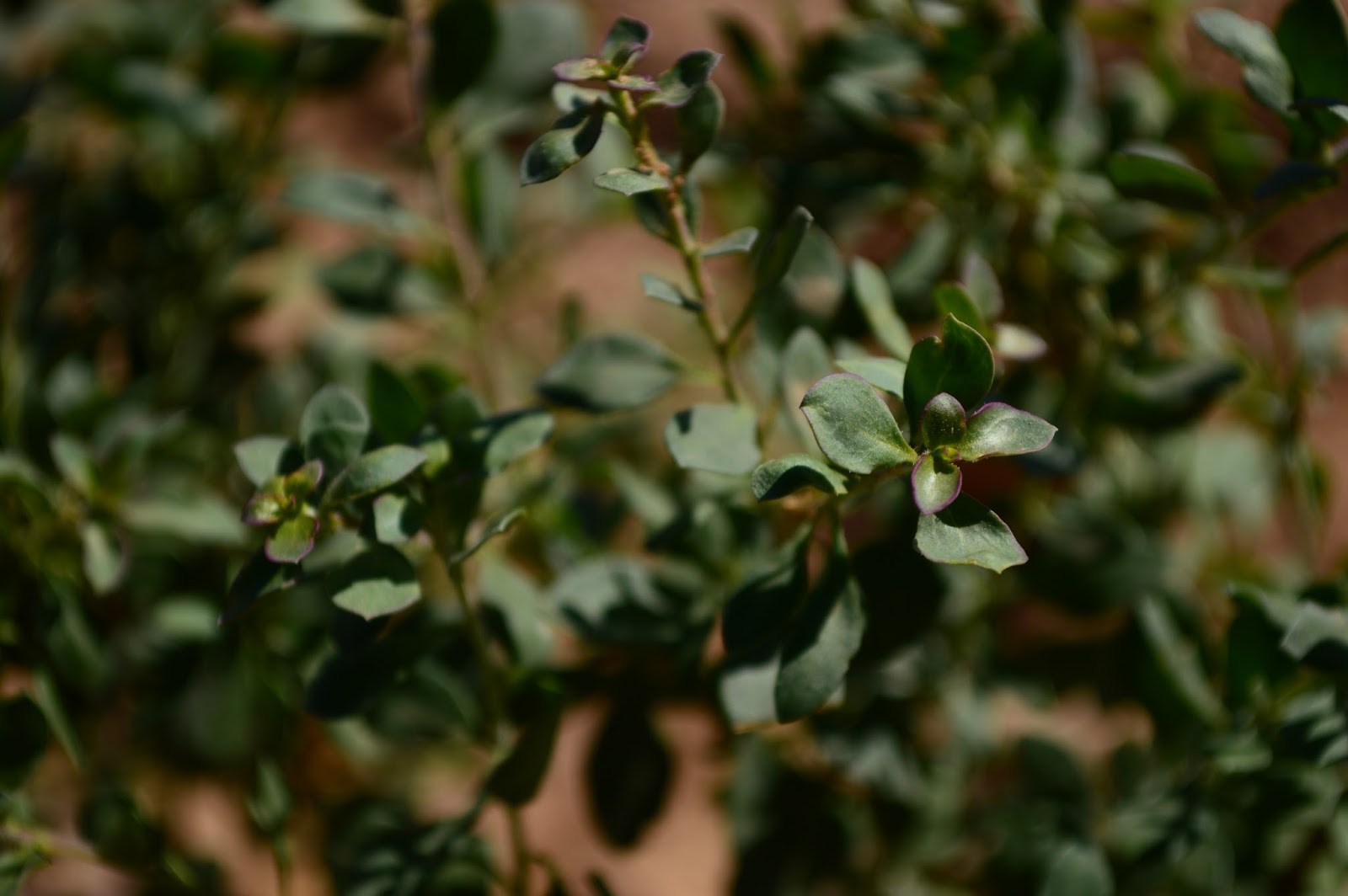 The common name for these plants is Emu Bush, as the fruits of certain Eremophila species supply fodder for emus in their native Australia.  However, in the absence of emus, I hope my little specimens will grow well.  These plants were grown on the southern side of Phoenix, but they seem happy enough with their new location.

And they make beautiful lines and lights and shadows in the October sunlight here in the desert... 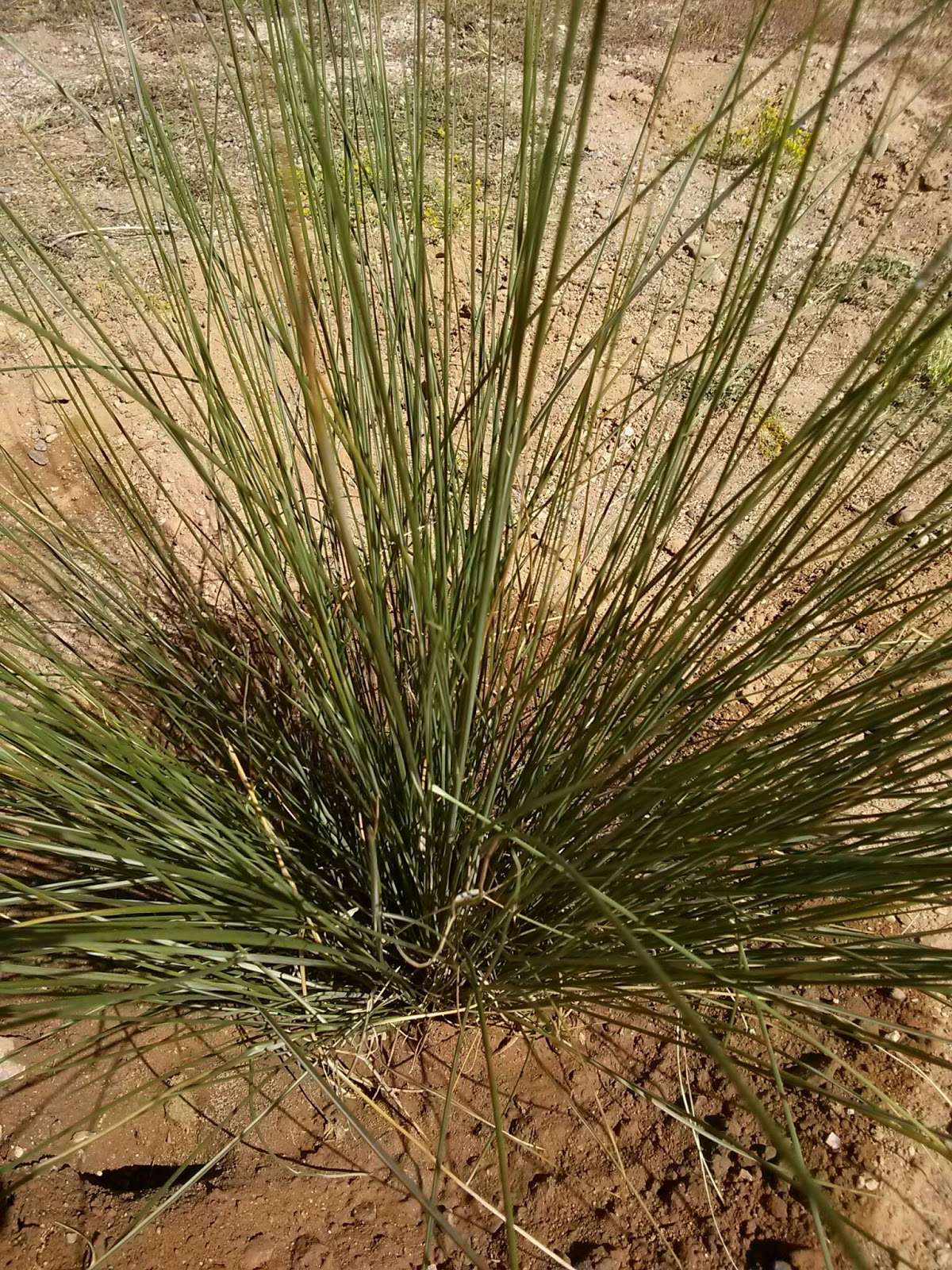 It has been a little difficult to know where to start in purchasing plants for the garden.  This is not a puzzle I am used to dealing with; but I now live well outside a newly grown-up suburb where old, established nurseries seem to be rare.  I have had difficulty matching my book and online research with plant availability.  It must be said that the large chain garden centers do have some nice plants but, of course, limited selection!

Earlier this week I was able to make a trip to a real nursery carrying a larger assortment of native and adapted plants.  And oh, how good it felt to be in a pleasant little nursery with all those cultivated, growing green plants.

Results: 1 Muhlenbergia "Regal Mist", 1 Damianita (Chrysactinia mexicana), 2 varieties of Eremophila, including "Outback Sunrise" and a low-growing spreading species that I can't recall the name of (pots were not labelled, most unfortunately!), and Ruellia brittoniana.

The Muhly grass went in first.  The gentleman at the nursery kindly brought me a 1 gallon pot not held in the sales area, but he warned me that it was already a 5 gallon plant.  It was indeed!  Rootbound and then some!  But I loosened the roots a little and settled it into a large planting hole and puddled it in. 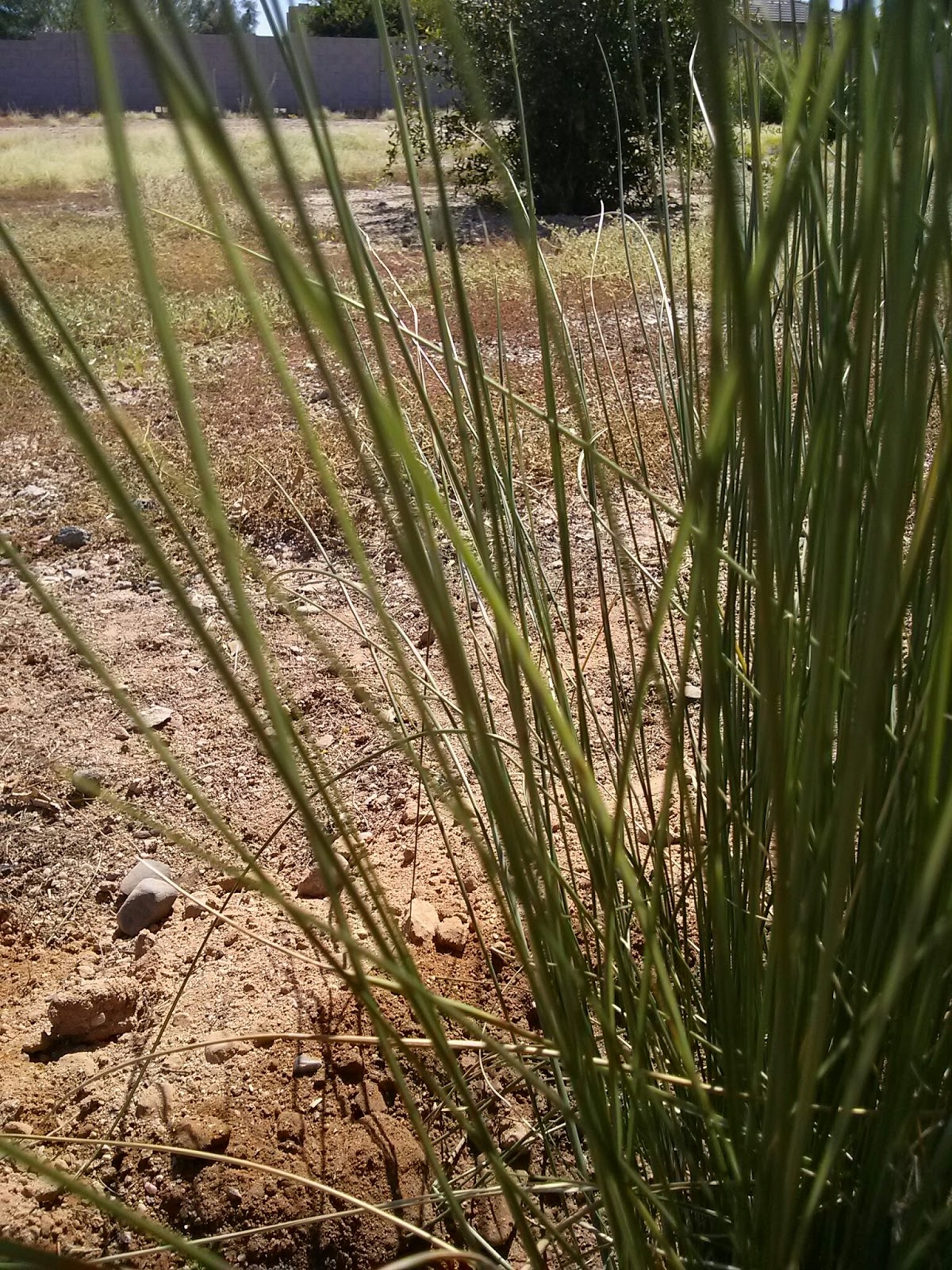 It looks happy and very well suited to its location.  I look forward to next year's pink plumes...

Then I planted the Damianita.  Like the Muhly grass, this is a native plant.  Damianita is native to the Chihuahuan Desert (New Mexico, Texas, and northeastern Mexico).  I am a little concerned that it will have to be moved into more sunlight eventually but will wait and see.  I have never seen these in bloom, but they are said to have bright yellow, daisy-like flowers above the fine, deep green leaves.  It is a small shrub (2 ft/61 cm).  The foliage is aromatic and quite attractive. 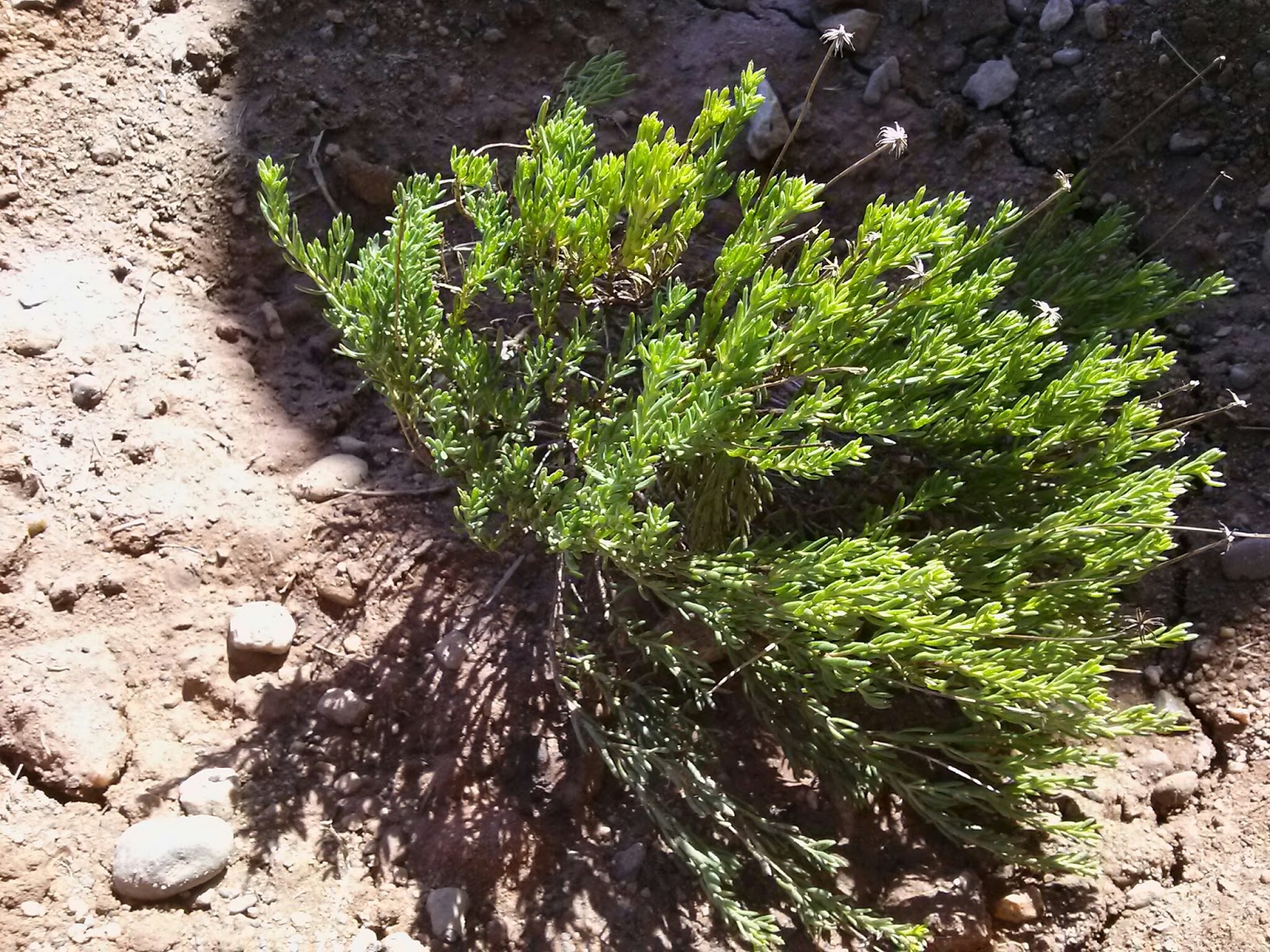 I was unable to plant the Eremophilas today, but hope to get them in shortly.  The Ruellia will probably find a home at the front of the house, as a landscape plant.  I read that it is potentially invasive, which I did not realize when I picked it out; and from past experience I think it wiser to simply keep it out of my little garden, no matter how attractive it would be there.  I don't enjoy controlling/removing the too-rampant specimens!

So here they are: the first green friends to go into the ground in my small, sunny garden! 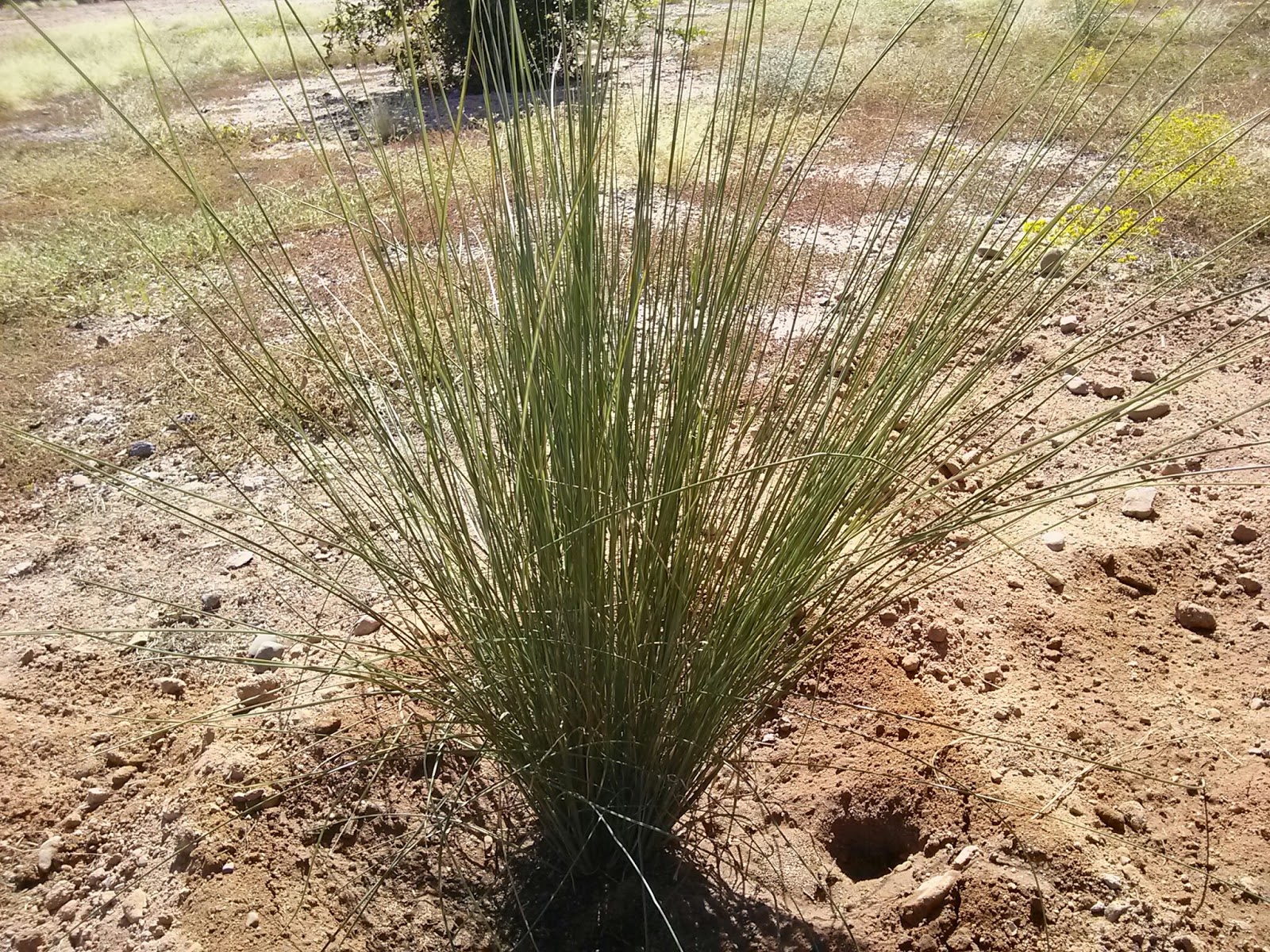