In a Vase: Fireworks and Roses 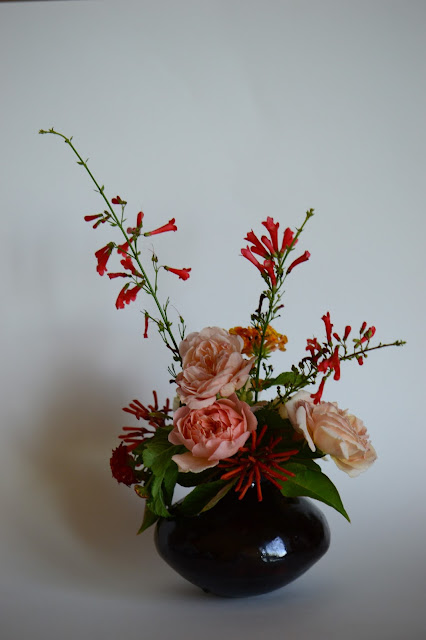 As I explained last Tuesday, the vase of the day before was a disaster from the start, and unfortunately one which I had no time to replace.  I had decided to try some new material only to have it wilt and refuse to perk up.

The culprits were Caesalpinia pulcherrima and Hamelia patens.  In the case of the Caesalpinia, I will perhaps try the boiling water trick at some point as it is a fairly woody plant, albeit tender.  The flowers would be grand in a vase if one could get them to last any time! 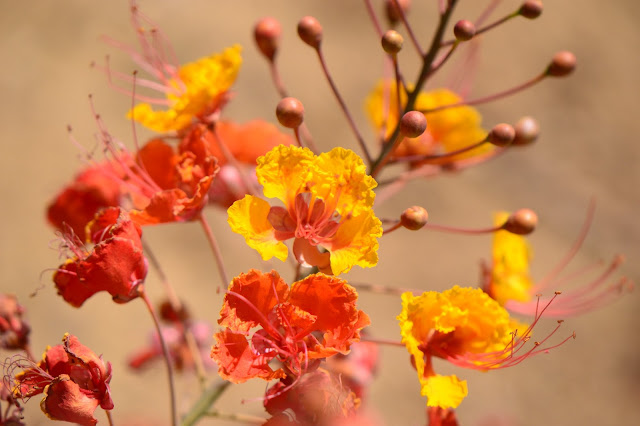 Though I have no immediate plans for testing the Caesalpinia again, I did want to try the Hamelia a second time because I felt that the wilting could well be the result of the shrub being a bit wilty itself when I cut the flowers.  So this morning I cut more for today's vase, taking them from good, turgid growth.  Results are much better!  The slender, scarlet blooms seem pleased at being in water in a cool room. 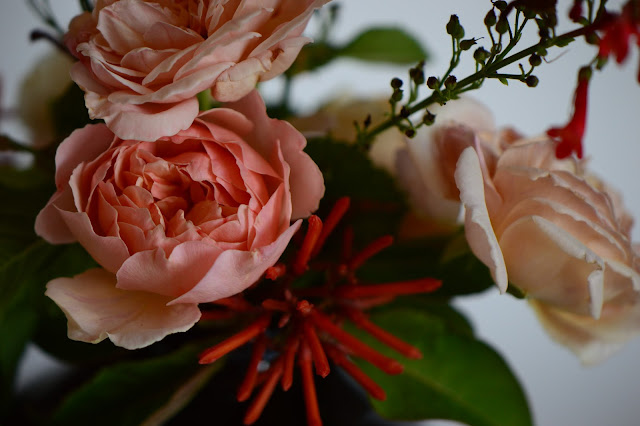 As you can see, there were also plenty of blooms available from rose "Crown Princess Margareta".  I was able to cut a full cluster as well as a couple of singles. 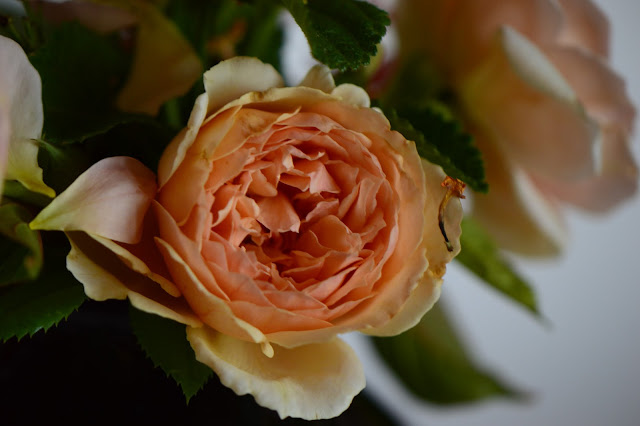 They combine with Russelia and Lantana to make a warm, summery bouquet. 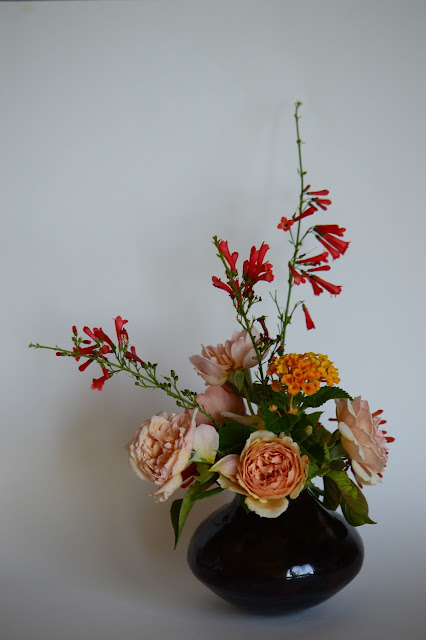 The slender trumpets of Russelia equisetiformis "Big Red" add another hint of fireworks. 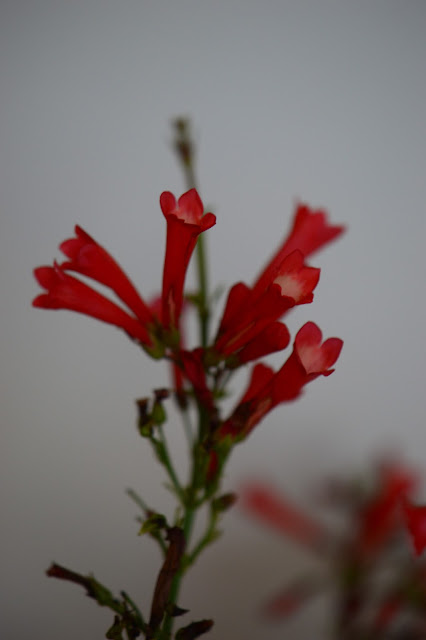 The two red trumpet types form an interesting combination.  Each plant exhibits distinctly different growth habits, with Russelia being a loose fountain of green stems and Hamelia being quite shrubby.

The other component of the vase is lantana, of which I have used two types, both the named "Denver Red" (the dark cluster in the photo below)... 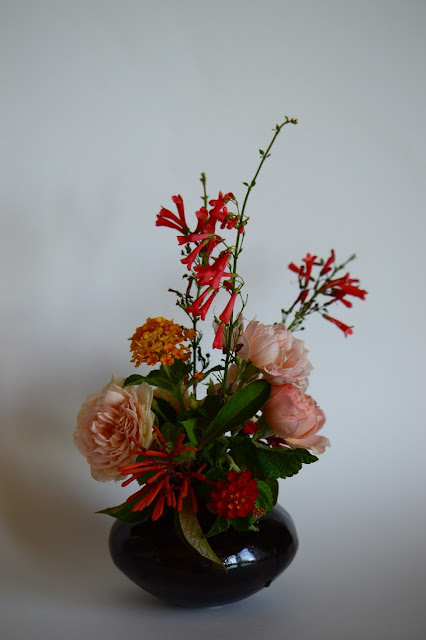 ...and an unknown orange variety piled beneath a couple of palm trees in what is now the Rose Border.  Lantana is a very faithful plant here, putting on bloom at intervals throughout the year. 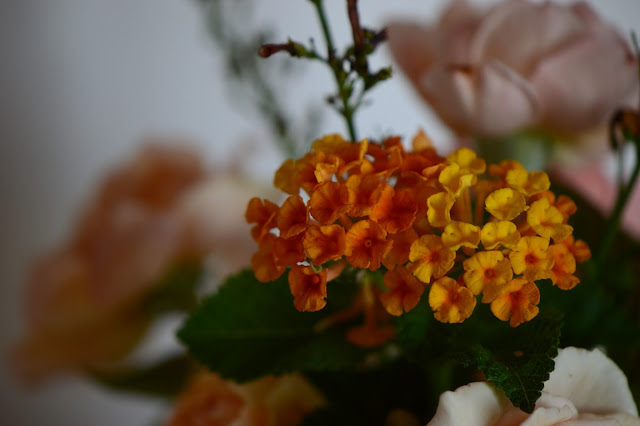 I used one of my handbuilt vases which is finished with a dark brown glaze.  Its bouyant form seemed to complement the very vivid colors of the flowers. 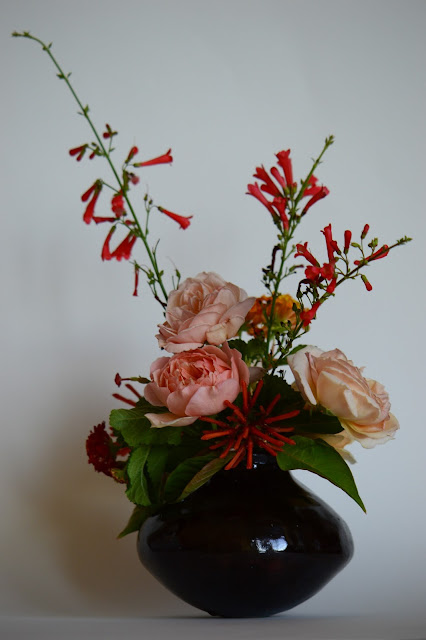 I really missed posting my vase last Monday; this meme is addictive!  Thanks, as always, to Cathy for hosting it at Rambling in the Garden! 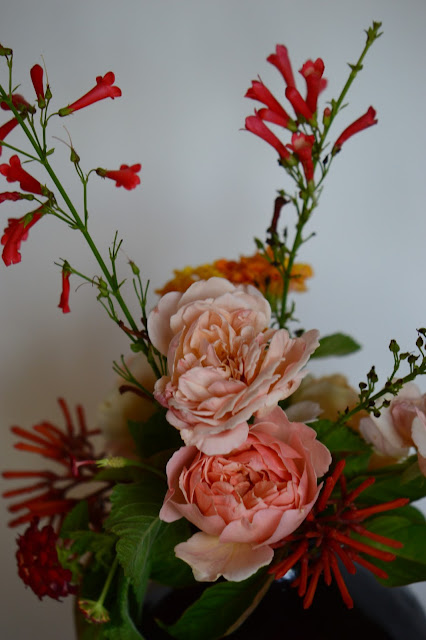