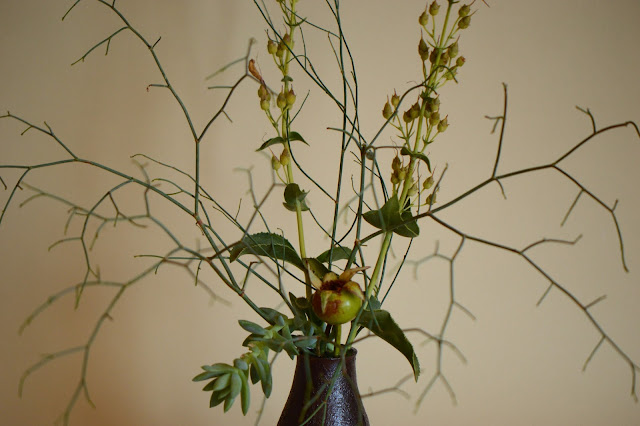 I have been looking forward to this week's In a Vase on Monday post for which Cathy, unusually, set a theme.  The theme is "Ikebana"; and I am the first to admit that I have only the most cursory knowledge of what is, in itself, a very complex art form.  Nothing daunted by ignorance, I resorted to Wikipedia and memories of Japanese art concepts for a very superficial foray into the field. 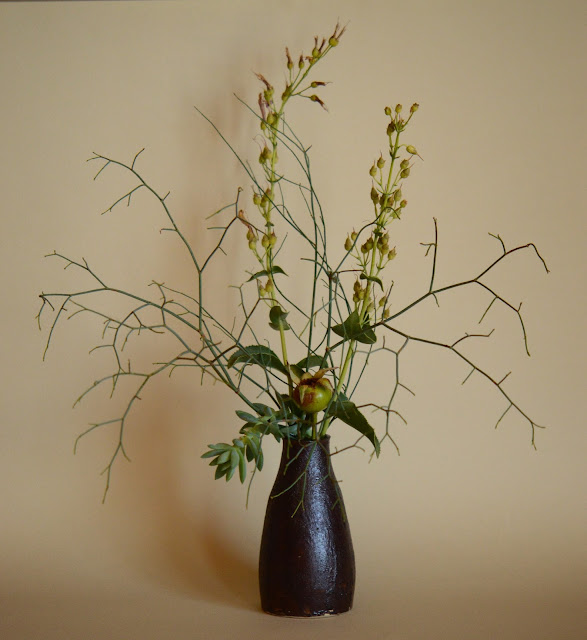 I did use entirely different material than I normally choose: seeds, a succulent, and one of my favorite local weeds. 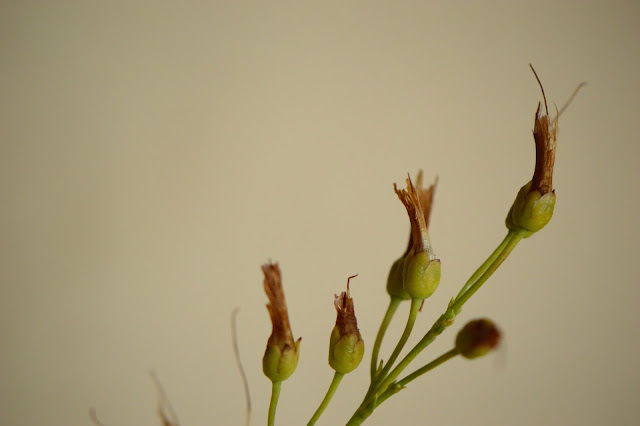 ...and anchored by their unusual foliage at the base of the flowering stems... 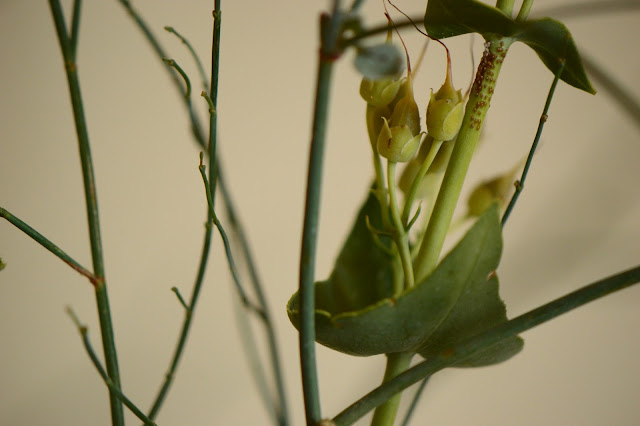 ...were set in among stems of Eriogonum deflexum. 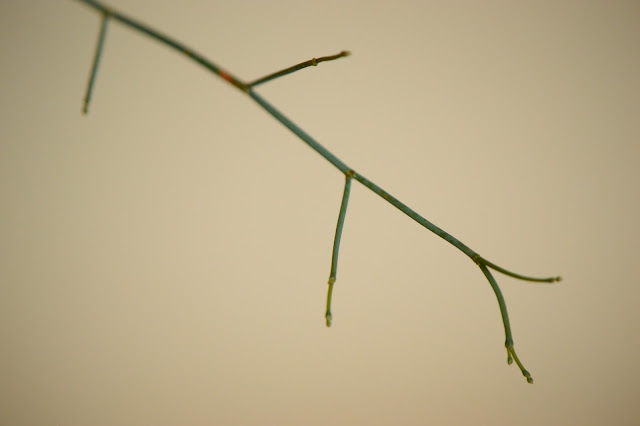 This is a harmless native weed, known as flatcrown buckwheat, among other names.  It begins with a small rosette of round, gray leaves tight against the ground.  Later it sends up leafless stalks in a loose-branching pattern, earning it the name of "Skeleton Weed" as this is the most visible part of the plant.  In autumn and winter the stems set miniature flowers of white and pink, very dainty little flowers that are hardly noticeable unless one gets down to really look at them.  I have only the leafless stalks to show here as flowers have not formed yet.

Then there is a stem of Sedeveria "Harry Butterfield", which is growing on well in a pot on the patio.  For some reason the Sedeverias have been the most reliable succulents for this garden. 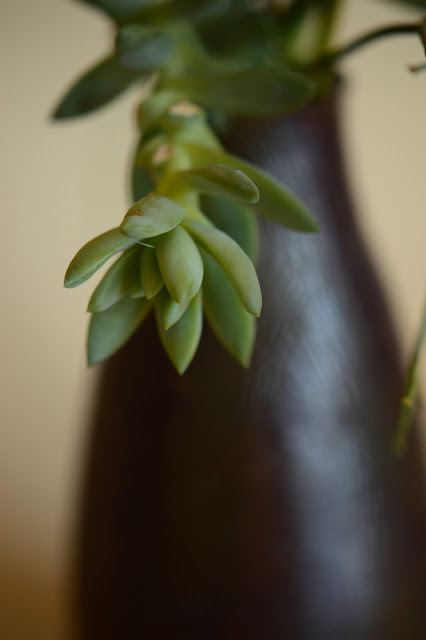 And finally there is a single hep from rose "Sterling Silver". 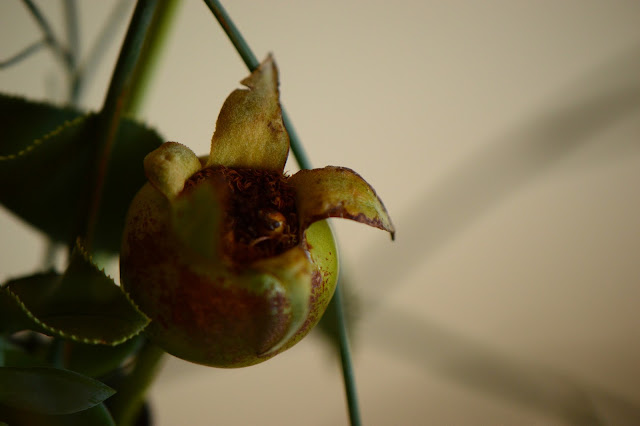 My vase of choice was a handthrown stoneware piece which was part of a glaze experiment. 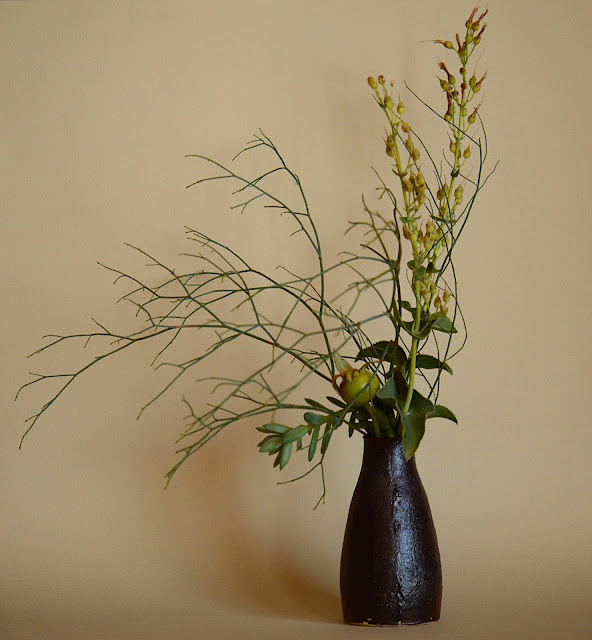 Actually, as an experiment it was distinctly a failure since I used a firing cycle totally unlike my usual glost firings.  The glaze got far hotter than normal and bubbled into many little craters, nor did it develop the color I was looking for.  Still, it seemed a good choice for today's experimental venture into Ikebana! 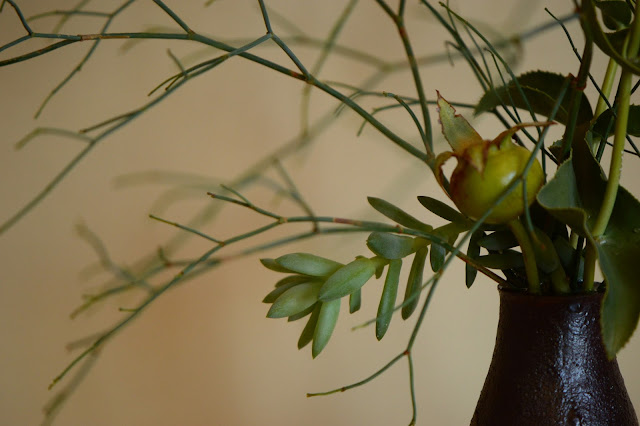 So thanks to Cathy, I have gotten to play with a considerably different approach to the IaVoM theme, and I'm looking forward to seeing what others have done!  Do check the post at Rambling in the Garden! 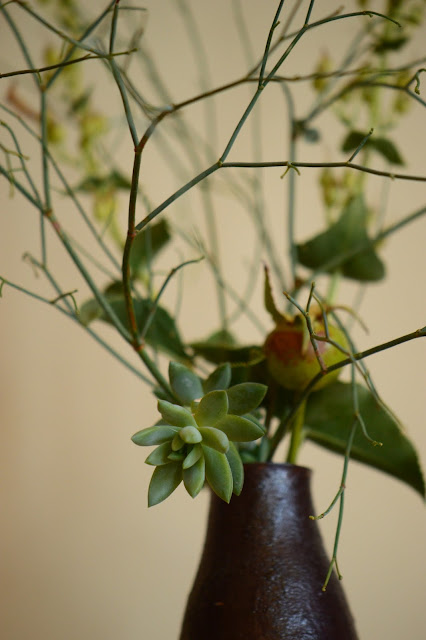