Red, Green, and a Golden Queen 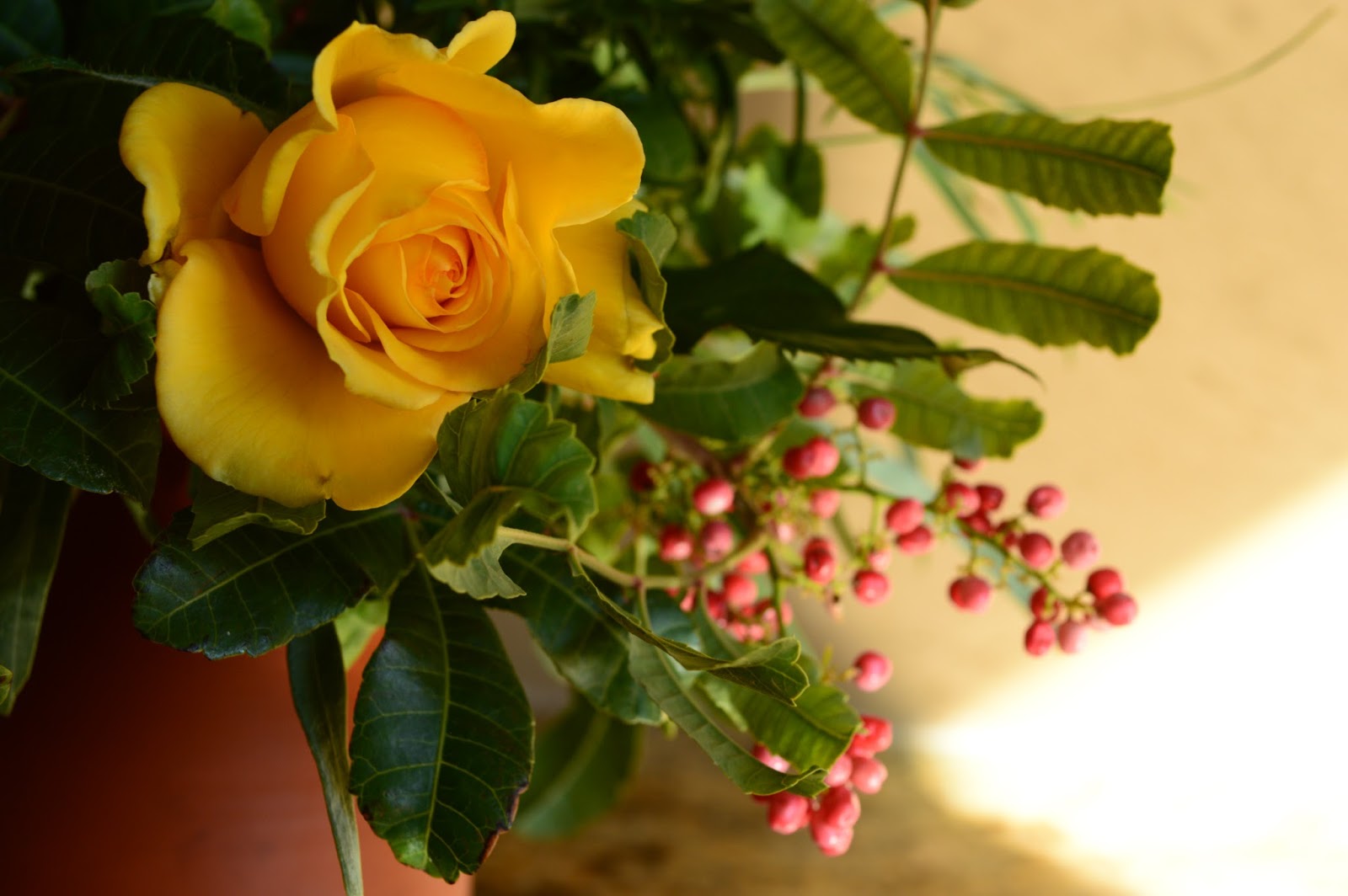 Monday again, and time for a vase to join Cathy's Monday Vase meme at Rambling in the Garden.  As we are getting perilously close to Christmas Day, I tried to select material that will hold through Thursday as well as using the traditional red and green hues.  Both intentions were modified by the generosity of a rose bush.  How could I not include such a lovely rose?   So one golden bloom of Sun Flare (grown in a large pot on the back patio) went into the vase.

My ideas actually began with the foliage and berries of Schinus terebinthifolius and blooming stems of Russelia equisetiformis.  I have used the schinus once before - incorrectly identified as Pistacia lentiscus.  I discovered my error last week during an online search which I wrote about in last Tuesday's post.  But identification aside, it bears the only berries around, and the leaves go well in a vase.  And the Russelia is sending up long shoots with a plenitude of tiny red buds.  I have been impressed with the lasting qualities of the Russelia; in an earlier vase the flowers themselves stayed fresh well over two weeks!   So the Schinus went in with a few berries... 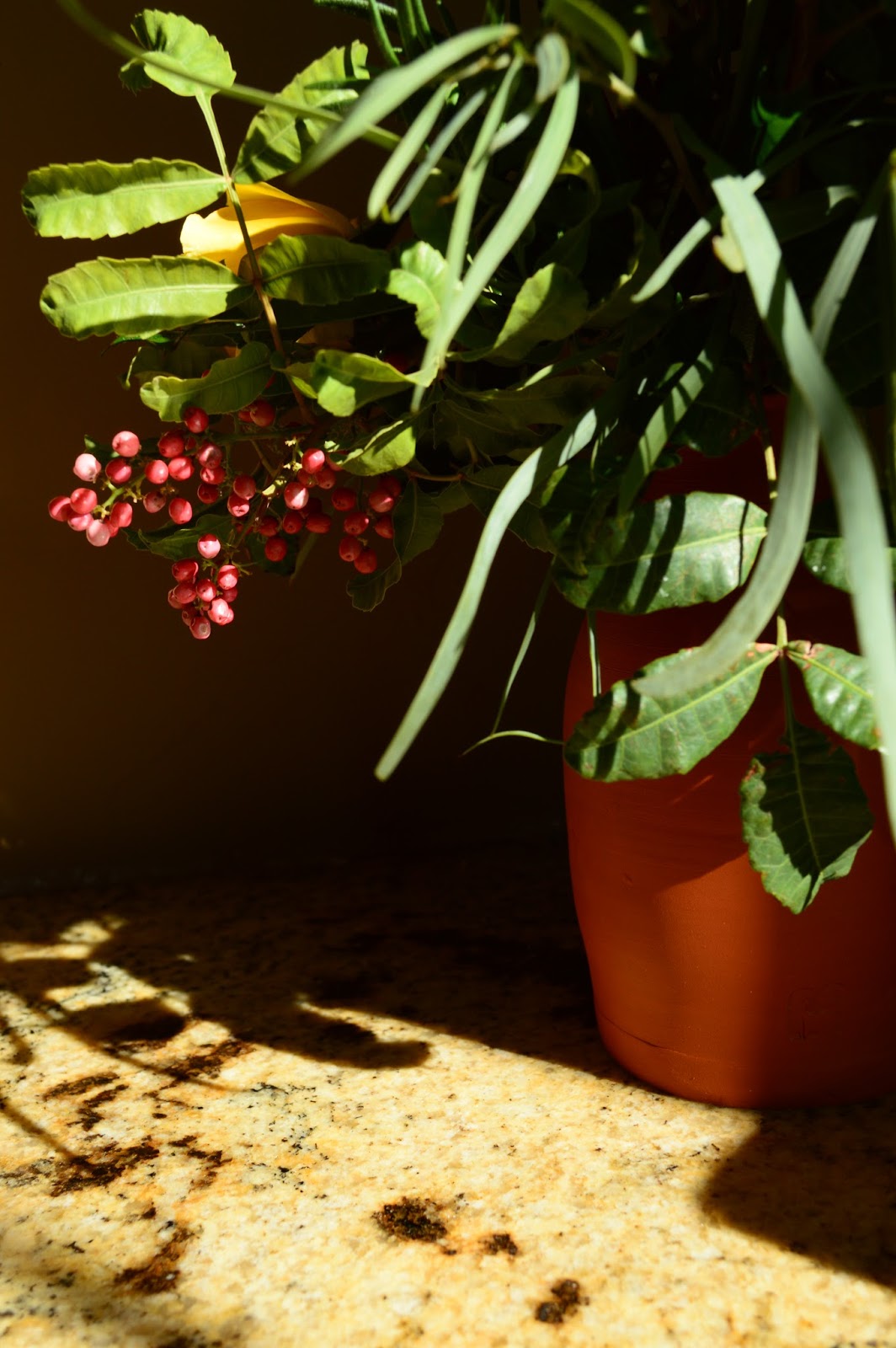 ...while the slender and nearly leafless Russelia stems hardly show yet among all the foliage.  But as the flowers open, they should become a major factor.  In the meantime, a single sprig of Salvia greggii "Flame" is holding the colour on the other side of the vase. 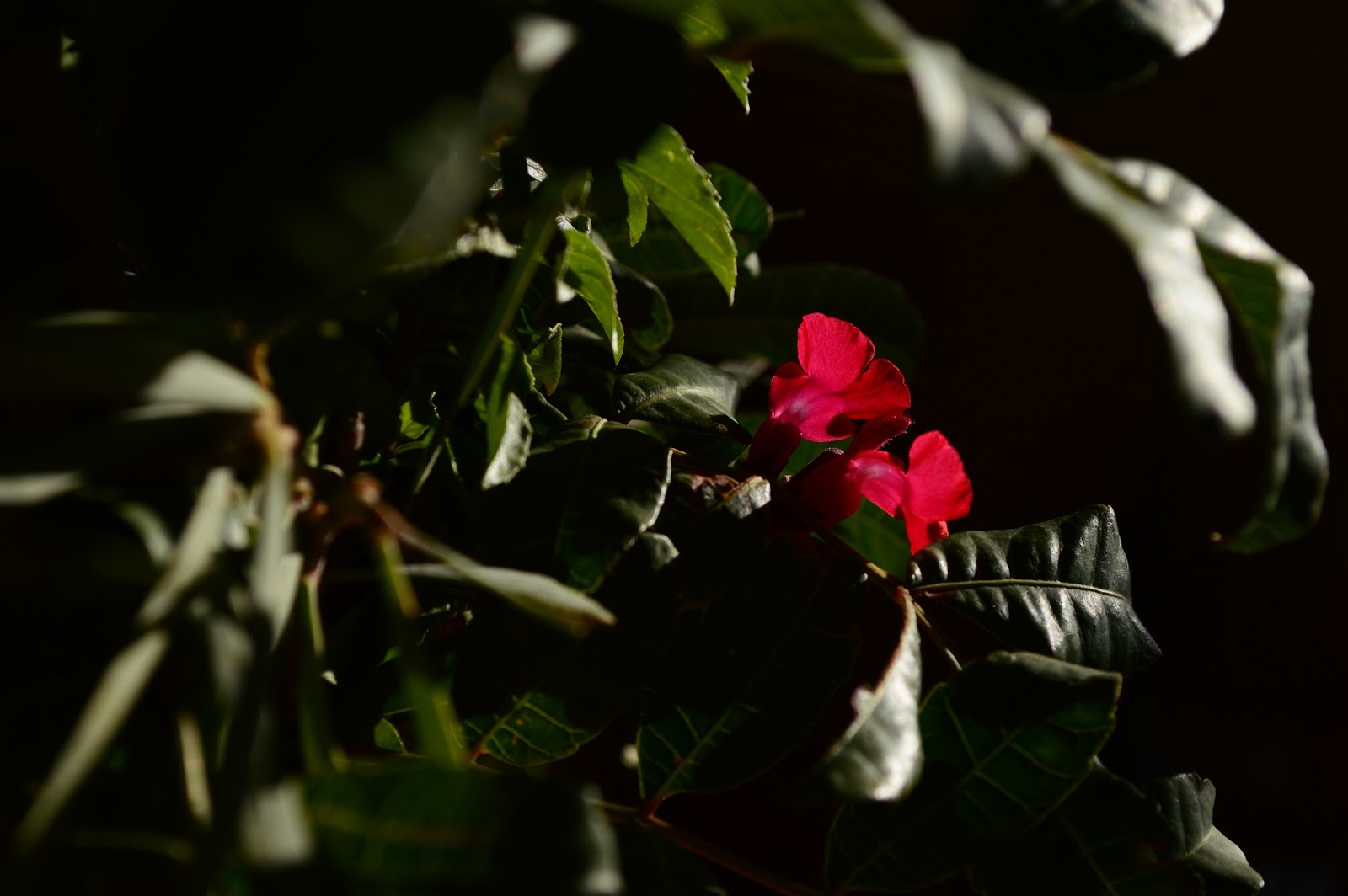 I expected to use plenty of basil from the herb garden; I like its effect as visual filler.  But the basil is reaching the tattered and torn stage - edible, but hardly aesthetic!  So only one stem went in, and a couple of clippings from the new acacia.  Primarily I relied on the schinus for green leaves.

The vase is one I made earlier this year while developing a red clay body for handthrowing.  Since it is made of unglazed, low-fired clay, the pot is a little porous, and for some of the pictures I slipped a bowl under it to protect the counter.  But I did like the classic red colour as a backdrop to the berries, leaves, and flowers. 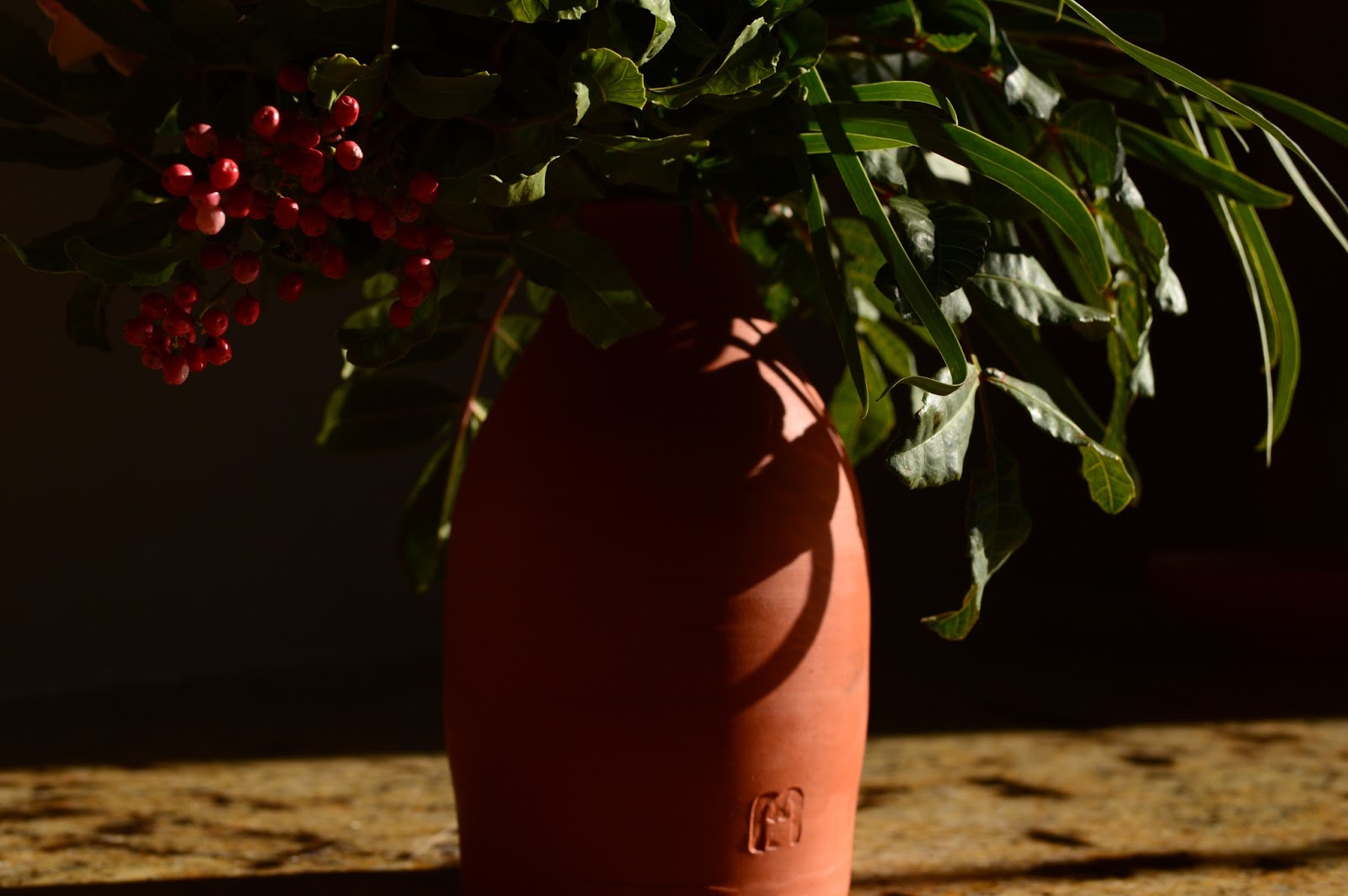 Hopefully, in a few days' time, the Russelia will be in full bloom, putting the arrangement into proper balance.  At present it looks like this. 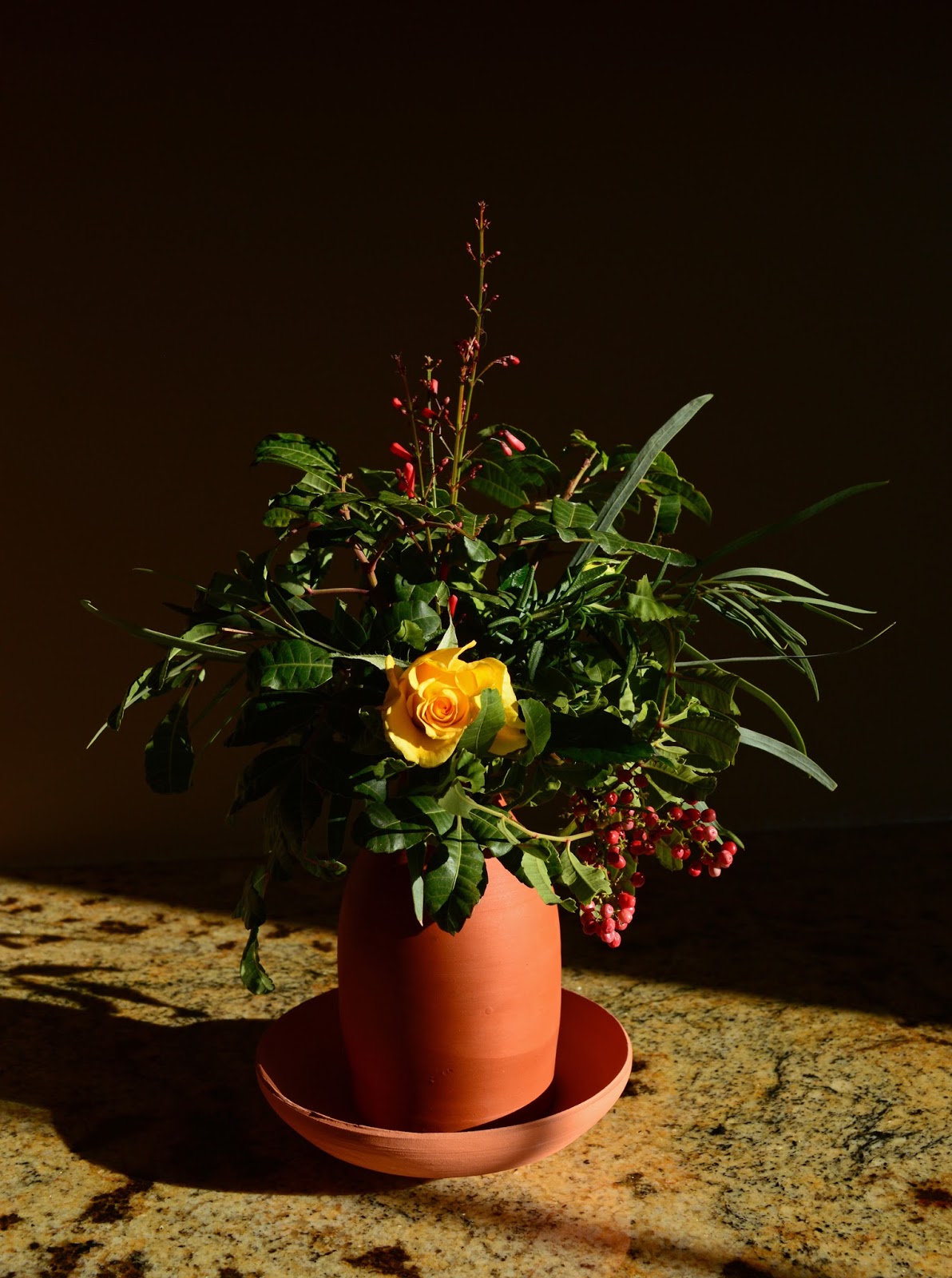 In any case, the golden rosebud will remain queen. 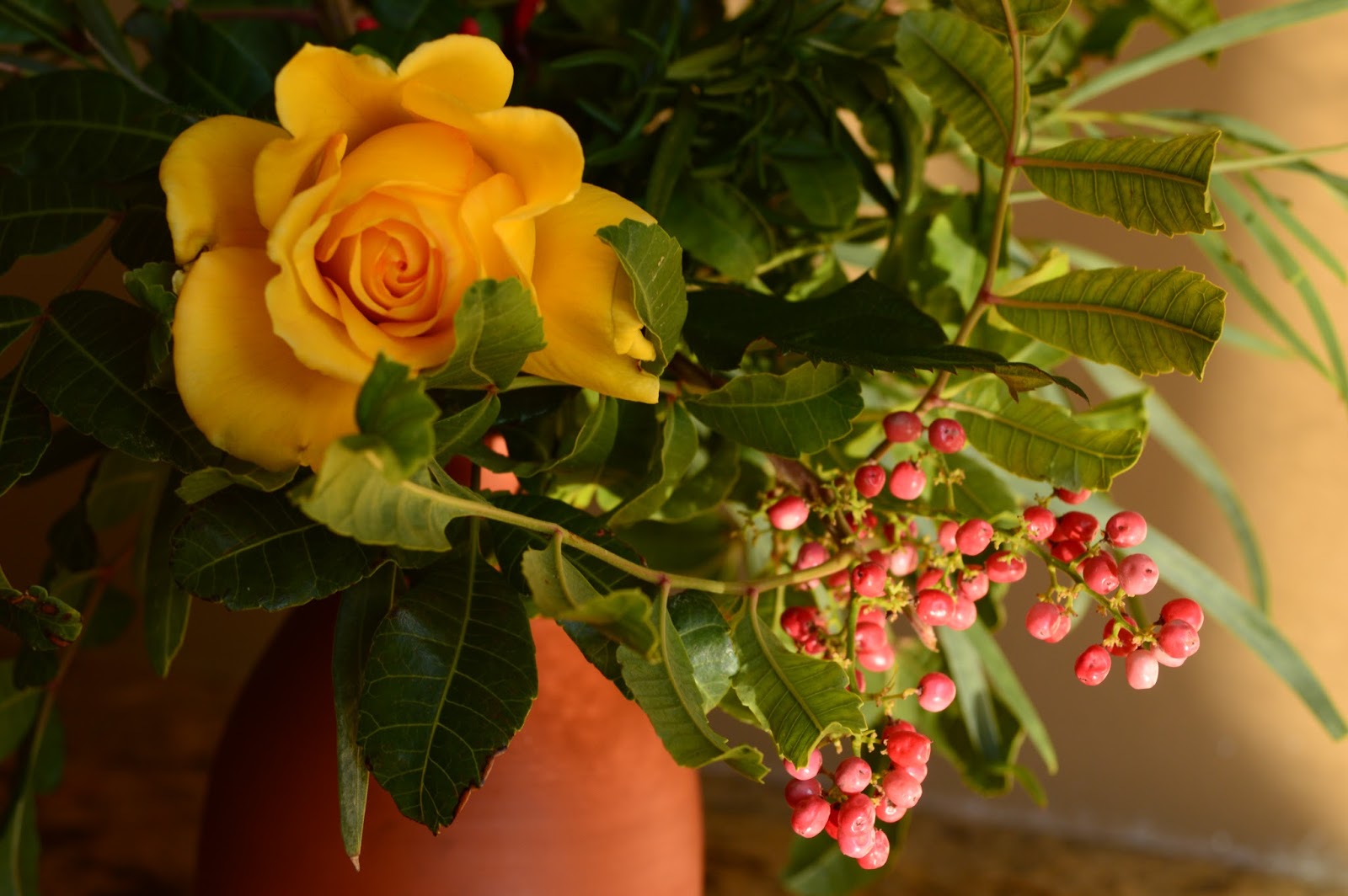 Wishing each of you a beautiful Christmas!