July in the Garden 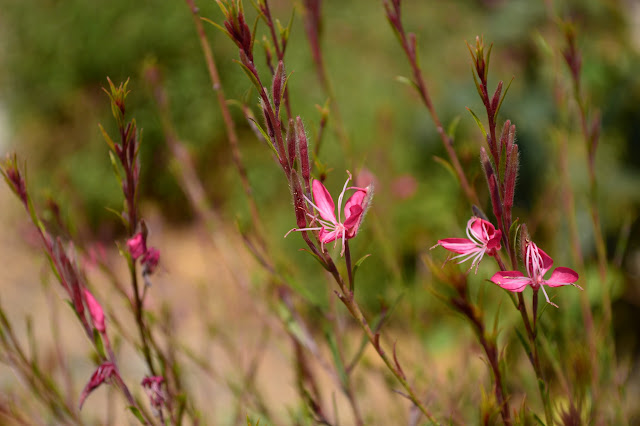 Last month there was not an End of Month View post because I had given a complete overview of the garden in mid-June.  With the close of July, I want to take another look...

The worst of the hot, dry weather seems to be over.  We are now getting the occasional rain - generally very strong downpours when they do happen!  Although a number of plant losses occurred - mainly in June - the structure of the garden is actually beginning to be felt now - perhaps not by the casual observer, but by me at any rate.  And having watched through almost a full year in the garden, I begin to see more clearly how I want to proceed.

The most structured area at this point is the Central Bed.  The top end meets the patio, where rose "Wollerton Old Hall" continues to prove an excellent choice. 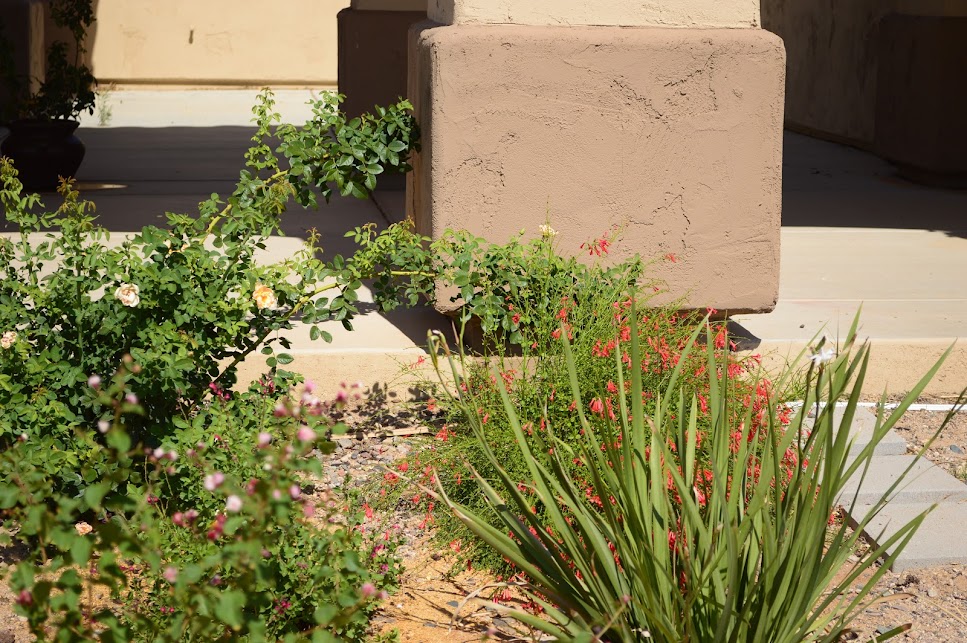 Despite the occasional cream accent (as with the rose), the overall colour scheme in this bed is turning to a distinct medley of strong pink/crimson/scarlet, hopefully balanced to keep it all pleasing to the eye!  A few plants need to be moved out and others in to strengthen the scheme, but there are already glimpses of it in such combinations as Russelia equisetiformis with Salvia greggii "Flame".  The Dietes irioides next to the Russelia needs to be moved into the South Border as its white and lavender blooms will be much more appropriate there.  In the meantime two significant additions to the Central Bed have been made: the structurally important Lagerstroemia indica "Dynamite" and the thriving Gaura lindheimeri "Siskiyou Pink", which has bulked up magnificently and begun to bloom.

I love the combination of the two plants though it's difficult to show it at the moment since Dynamite is barely in bloom; here it is with Gaura flowers blurred into the background.

Despite the above photo, the Lagerstroemia flowers are mostly red with flashes of white.

I am counting on this plant to add some much-needed shade to the lower part of this bed.

In the same way, I am using Lagerstroemia indica "Rhapsody in Pink" to give additional shelter to the South Border.  This border is primarily developing in purple/blue/yellow shades, with the occasional touch of pale pink from the Lagerstroemia, Muhlenbergia capillaris "Regal Mist", and probably others as next planting season begins.

The most spectacular plant in this area currently is a "background" shrub - ha!  Leucophyllum frutescens "Compacta", which anchors the upper corner of the border, burst into full bloom (see my last post) about a week ago.  Flowers have since fallen, but this plant is expected to repeat in response to ongoing rain.

I have a second one, still in its container, awaiting its position at the bottom of the border.  The rosemary hedge now stretches almost the full distance between these two.  In front is a medley of shrubs and a few perennials, as well as one grass, the most-cooperative Muhlenbergia capillaris "Regal Mist".  Its soft pink seedheads will continue the pink accent from the Lagerstroemia beside it, which, as you can see, is still smaller than said grass!

This border is beginning to look fairly bare - even more so in anticipation, since I am planning to move an important component.  Eremophila "Valentine" is too strong a pink for this area, and I have been wanting a shrub of its stature in the Central Bed, so I intend to shift it over in a few months.  It will fill a largish bare space in the middle of the bed behind the Gaura.

A big factor in the South Border is the nature of the plants.  Many of these are uncompromisingly dry-climate varieties, such as the Leucophyllum, Eremophila "Outback Sunrise" and Damianita (Chrysactinia mexicana), shown below next to a little clump of Lemon Thyme.  Damianita is primarily spring-blooming, but it is throwing out some blossoms now. 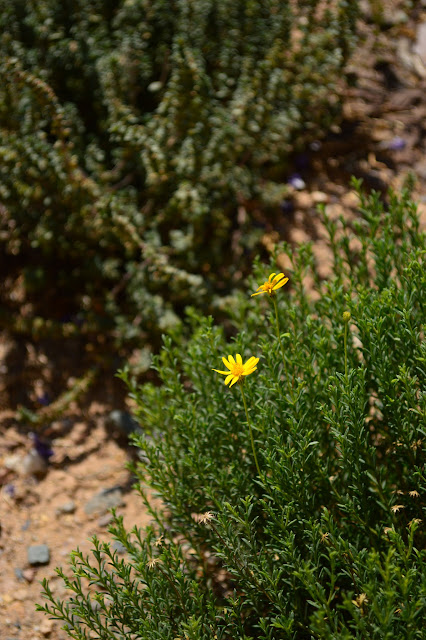 This intense drought-tolerance is a characteristic I plan to continue with the addition of such plants as Eremophila hygrophana (waiting patiently on the patio), though no doubt the effect will be a bit modified when I move rose "Sterling Silver" over to this area.  But how can I resist adding a lavender rose to the colour scheme?  Osteospermum "Blue-eyed Beauty" is also slated for relocation here, where its yellow with purple accents will be just the thing.

On to the barely begun East Border.  At one end of it was the Dry Corner, which, alas, is no longer with us.  I lost more plants from this area than from any other.  In part this was because of more intense sun and worse soil; in part because I did not realize that some of the plants I had placed here were no more (and possibly less) resilient than varieties I had used in better locations.

What remains is the Acacia tree (A. salicina), Euphorbia trinculli "Firesticks", Tetraneuris acaulis (tough despite its diminutive size), Berlandiera lyrata (which openly demands - and gets - a little extra attention), and Senna nemophila.  That's not much for the space involved, which looks sadly bare. 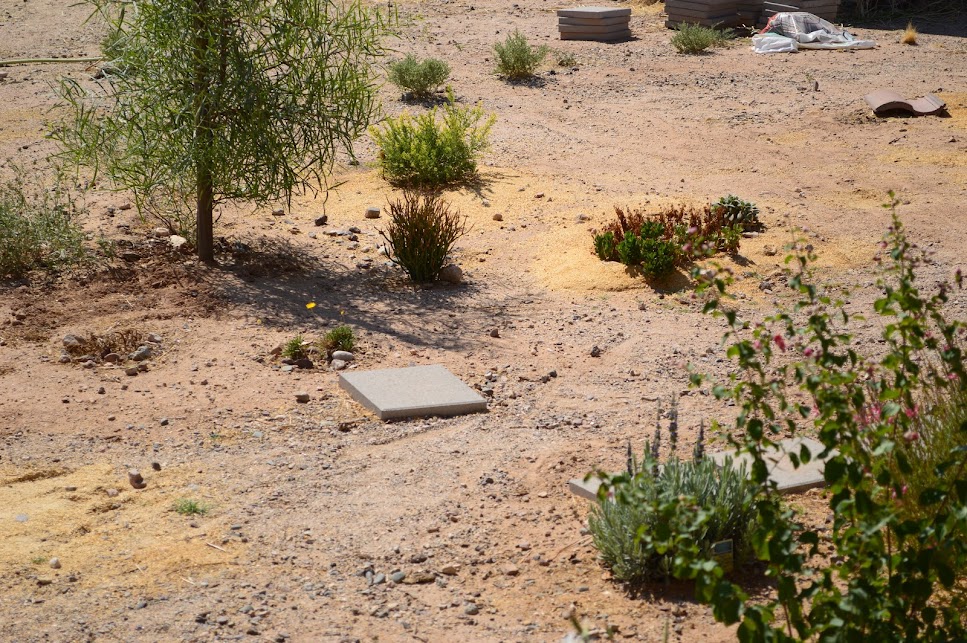 However, I think it is a grand time to rethink the concept of this area in any case.  With the Acacia tree growing rapidly, I hope that this spot will soon cease to be quite so harsh and will come to be more in character with the rest of the garden.  In particular, I intend to plant so that it will blend with the rest of the East Border, which today received its Big Addition in the form of a small shrub. 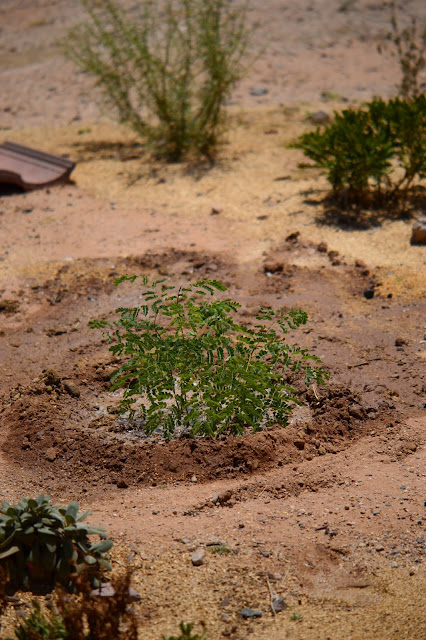 As you can see, this mostly empty area is now home to a tiny Caesalpinia pulcherrima.  I will try to get a separate post up on this planting tomorrow.  In the meantime, I will say that this very open, light-textured shrub can reach 6 - 10 ft (2 - 3 m) high and wide.  That means it will eventually fill most of the space up to Euphorbia "Firesticks".

It will also help set the colours for this bed at the bottom of the garden.  The blended orange/yellow/red flowers of the Caesalpinia will combine well with the surviving Euphorbia and Berlandiera, and certainly with little Tetraneuris acaulis, now returning to bloom.

And what about the non-existent North Border?  I hope to begin planting that side of the garden sometime in autumn.  I've begun listing plants for it...

So in a couple of months I intend to move a good many plants around as well as put some new ones in the established beds (established for all of one year!).  One big project involves rooting rosemary cuttings to continue the hedge around the east and north sides of the garden.

There are also other plants I would love to propagate: Chrysactinia mexicana, and Tetraneuris acaulis, as well as lavenders.  The native plants are not so common that propagation methods are common knowledge.  I will hunt a little futher for information and then trust my instincts, I suppose.  Some natives, such as Penstemon parryi and Aquilegia desertorum, should settle in and reseed themselves eventually.

As of the beginning of August, I am decidedly thinking in terms of the new planting season, which here starts with cooler autumn temperatures.  This is a rather long End of the Month View; and of course I am linking it with Helen's excellent meme at The Patient Gardener, which happily gives me a good reason to take a long view of the garden once a month! 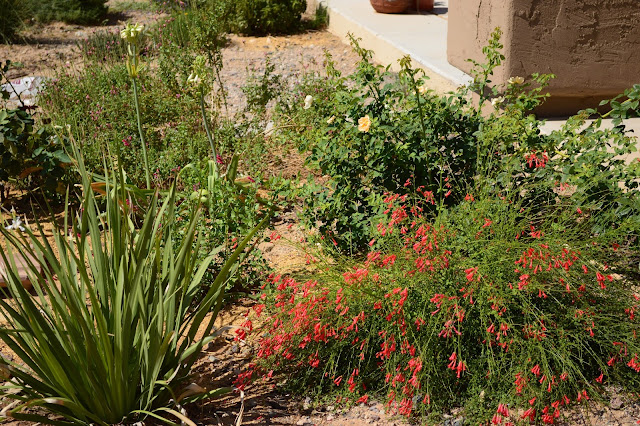