In a Vase: Plenty to Pick Today's vase is full of the plenitude of spring. 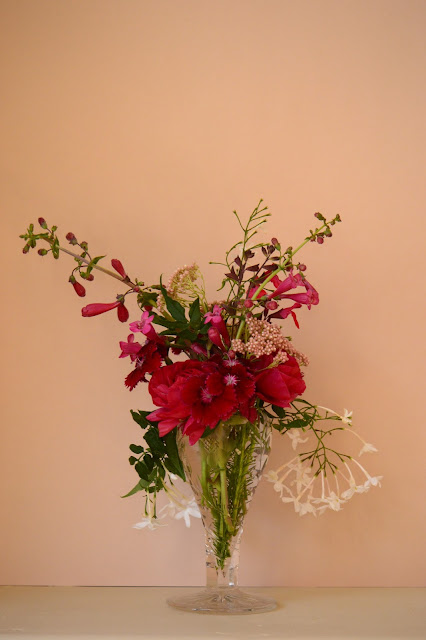 The weather now is simply scrumptious, and the garden is putting out its best for spring bloom.  So there were all sorts of flowers to choose from for the Monday Vase with Cathy at Rambling in the Garden.

In the end I picked Ranunculus... 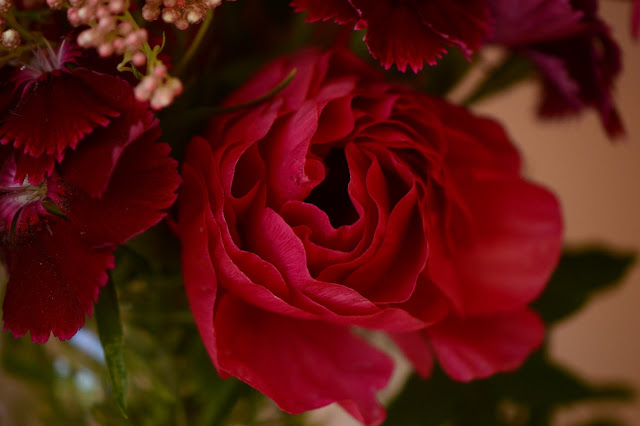 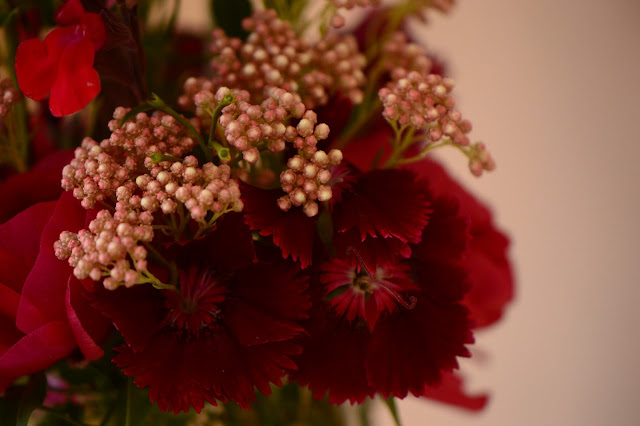 ...and also two flowers that have not been seen in this blog often, if at all.  Penstemon pseudospectabilis is sending up flourishes of bloom stems with bright pink trumpets. 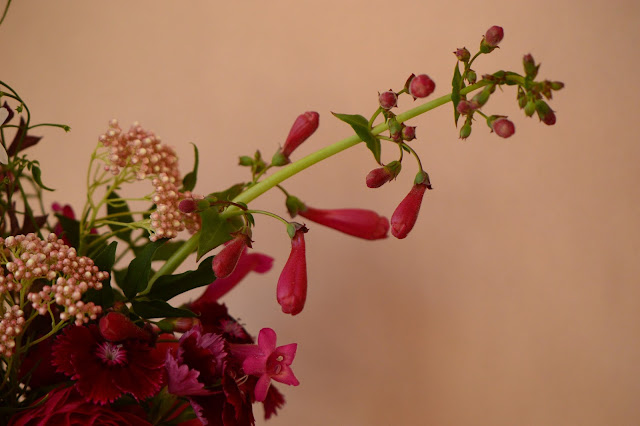 This plant has considerably different foliage from Penstemon parryi, which has been in the garden over a year now.  P. pseudospectabilis is not, to my eye, as elegant a plant as its cousin, but its exuberant bloom and unusual round, bluish leaves (sorry, no photos of the foliage yet!) make it well worth adding to the garden.  That, plus its reputation in hot, dry climates!  Its flowers are a brighter pink with the familiar glitter but less of the bearded throat which earns the genus its common name of "beardtongue". 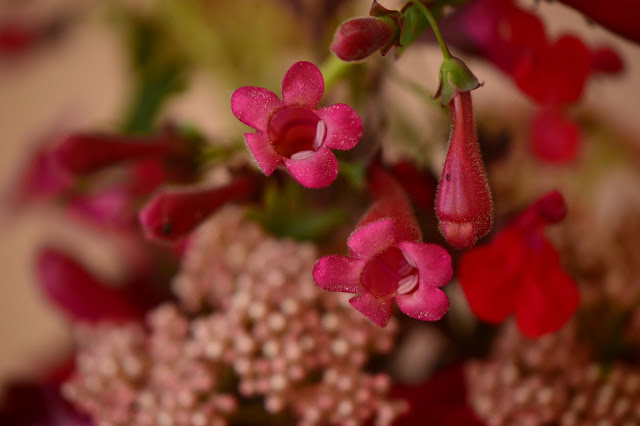 The second newcomer is Ozothamnus diosmifolius, another of the Australian shrubs I have added to the South Border.  This one is grown specifically for cutflowers, hence my eagerness to purchase it last year.  It is blooming at last; the sprays of tiny buds, which florists use as filler, are all over the wispy little bush.  The needlelike foliage is pretty and a bright green, though the overall habit so far is so filmy that the whole plant could easily be lost in a border, I think. 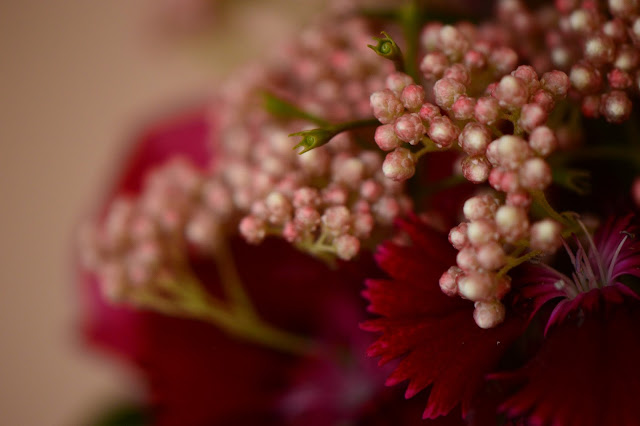 Oddly enough, I tried cutting some earlier sprays a few weeks ago, but the stems wilted very quickly and I was unable to complete the vase.  I think the bush needed water, but the sudden meltdown was disheartening.  However, today's batch has been cooperative, and they do combine beautifully to fill out the bouquet. 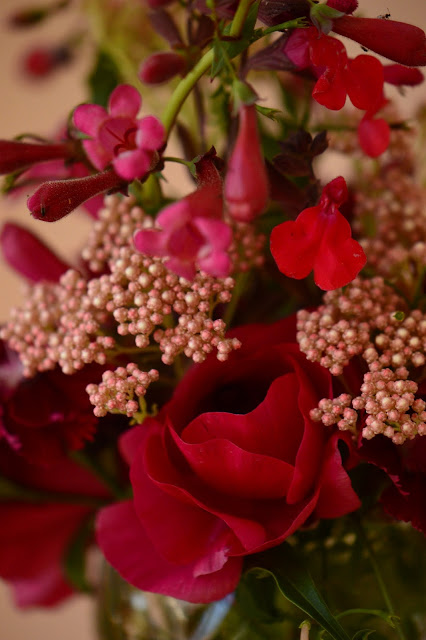 Also in the vase is jasmine (Jasminum polyanthum), grown in the patio by my sister.  We are making the most of jasmine season; the scent on the patio is heavenly!  It was nice to bring a bit of it indoors. 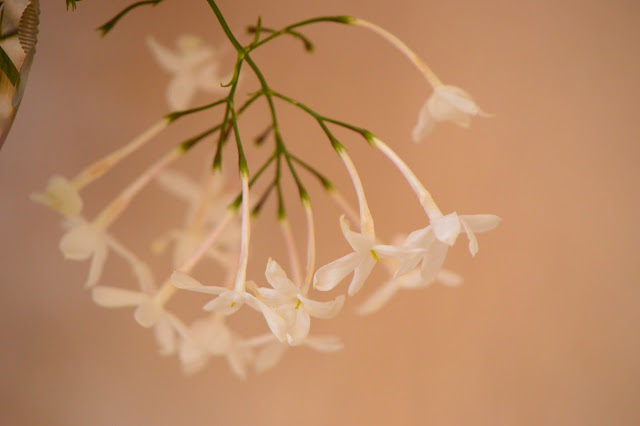 I am using a much-loved vase given to me by my sister for Christmas some years ago, one of those lovely finds from an antique mall.

Oh yes, and there are a few stems from a Salvia greggii seedling; though their red-pink flowers will drop quickly, the dark bracts and stems are still nice. 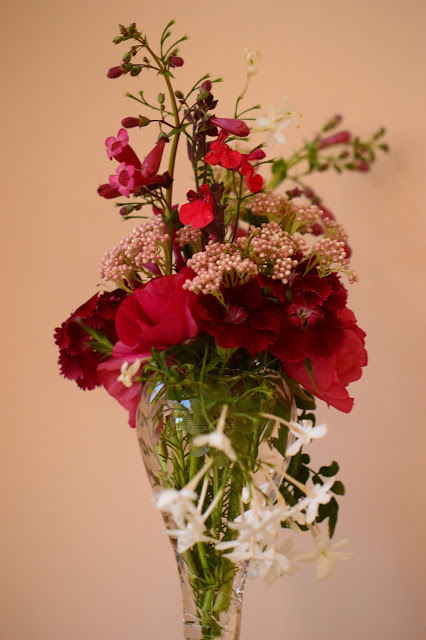 With the addition of the jasmine, I am realizing how rarely I use white in my vases.  That will have to change... 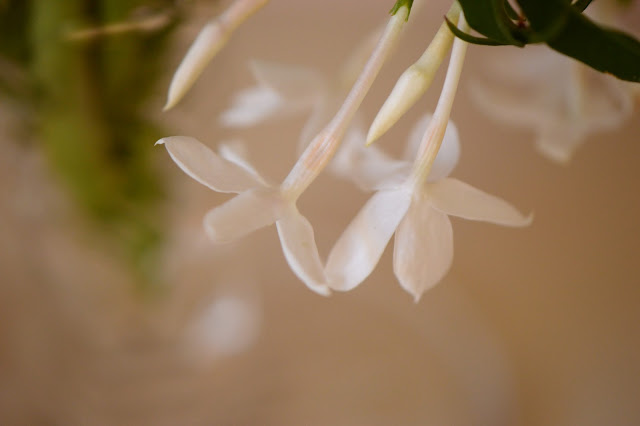 I hope all of you are enjoying a bit of spring or autumn by this time!

Have a great week! 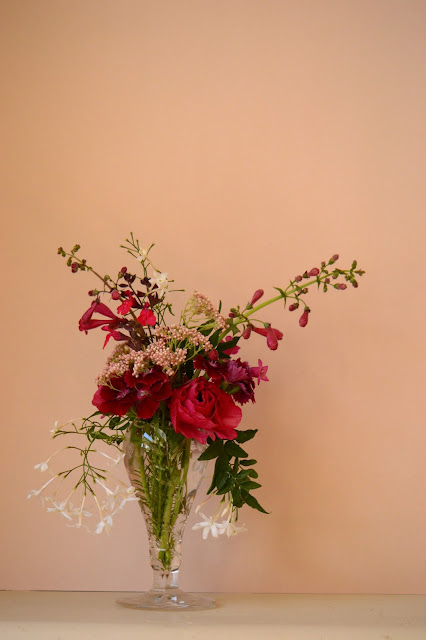